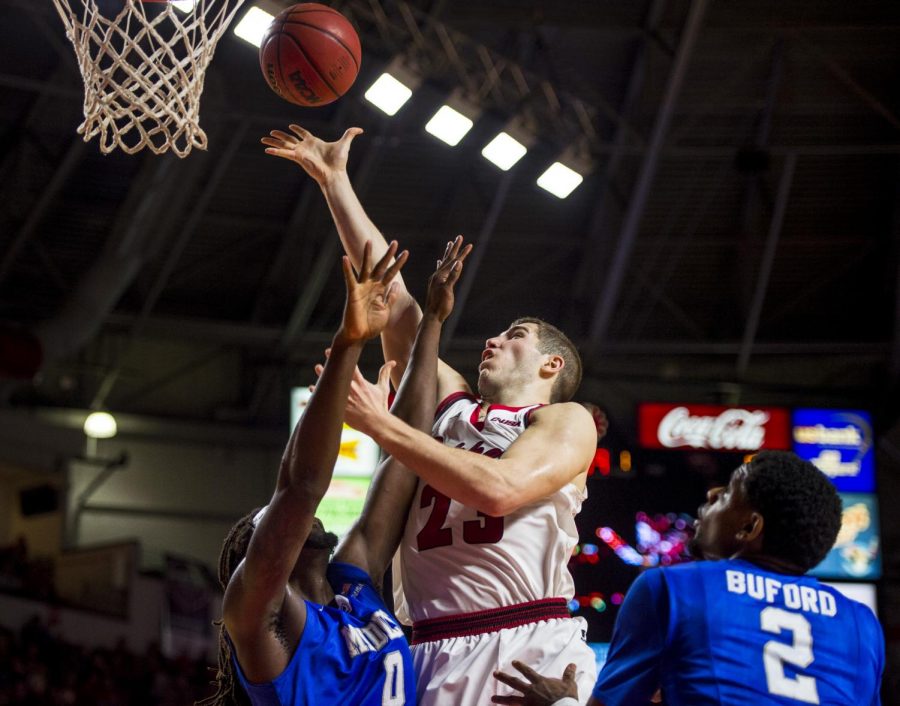 WKU's forward (23), Justin Johnson, puts up a shot during the first period of a basketball game against MTSU at E.A. Diddle Arena on Jan. 30. The Hilltoppers lost the game to MTSU with a final score of 66-64. Emily Kask/Herald

The long-time rivalry between Middle Tennessee (15-6) and WKU (11-11) ended the same way it has for nine of the past 10 contests – with a Blue Raider victory. MTSU took down the Hilltoppers by a final score of 66-64.

MTSU came in to Diddle Arena on Saturday to take on a WKU team that just ended the nation’s longest active win streak with their win over Conference USA front runner, University of Alabama-Birmingham.

It was a tale of two halves for WKU as the first half featured poor play from the Hilltoppers.

“We didn’t come out there with enough heart in the first half,” junior guard Fredrick Edmond said.

WKU shot 6-27 from the floor in the first half and only managed to put up 18 points. That was the fewest points scored by the team since their game against the Louisville Cardinals earlier in the season. The Hilltoppers found themselves in a 36-18 hole heading into halftime.

“I thought the first half we played on our heels, we had some good looks that didn’t go down,” Head Coach Ray Harper said. “We couldn’t seem to get anything going offensively.”

The second half was a much different story. WKU outscored MTSU by 16 in the half.

“We just stuck together, played as one and fought more,” freshman guard Chris McNeal said. “I feel like if we do that for two halves we will be fine for the rest of the season.”

Coming out of intermission the tempo was immediately notched up a level. A 9-0 run by the Hilltoppers along with clutch free throws from junior forward Anton Waters allowed WKU to fight back.

“I thought they really played well, I thought Anton in the second half really gave us some energy,” Harper said. “You have to work in the post hard and I don’t see us doing that.”

The Hilltoppers had been trailing all night until the 6:05 mark in the second half when senior guard Aaron Cosby knocked down a three pointer in the right corner to give WKU the 53-51 lead. That was the first lead for the Tops since they led 2-0.

Another Cosby make from distance gave WKU a 58-54 lead with 4:51 remaining in regulation.

MTSU headed to the free throw line up 65-64 with 6.1 to play. The Blue Raiders converted on the second free throw. McNeal pushed the ball up the court, handed off to Edmond who attacked the basket with a reverse layup that found the rim and rolled out at the buzzer.

“It’s (the last second look at the basket) about all you can ask for,” Harper said. “Second half the ball moved better, we didn’t dribble the ball quite as much. We got the ball moving side to side.”

WKU had three players that managed to score in double figures. McNeal finished the night with 18 points, three rebounds and two assists.

Cosby shot 4-14 from the field for 10 points, five rebounds and three assists. Edmond walked away with a double-double on 14 points and 12 rebounds.

The loss drops WKU to 3-6 in C-USA play on the season. The Hilltoppers’ next game is Thursday at 7 p.m. at the University of Texas at San Antonio.