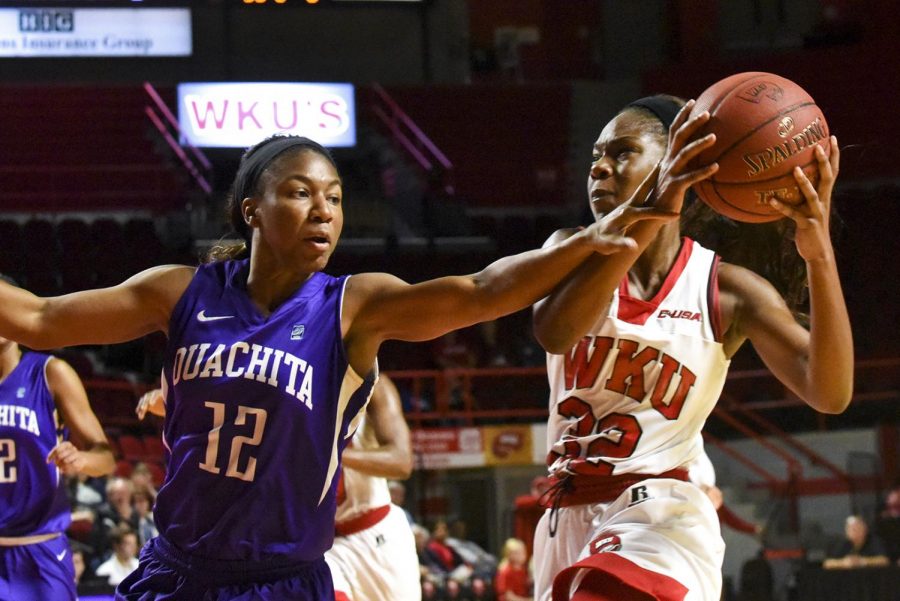 Freshman guard Kayla Smith (32) heads to the hoop for two of her 17 points during the Lady Toppers’ 108-43 win over Ouachita Baptist University on Nov. 3 at Diddle Arena. Matt Lunsford/HERALD

The WKU Lady Toppers opened Conference USA play on Saturday afternoon with a resounding 81-52 win over the Marshall Thundering Herd in Diddle Arena.

Five players notched double figures for WKU as the Lady Toppers were led in scoring by sophomore guard Tashia Brown with 21 points.

Opening conference play on a strong note was one point of emphasis for Head Coach Michelle Clark-Heard in the matchup.

“You don’t want to start off in a hole, for sure,” sophomore forward Ivy Brown said, according to a post-game interview transcript. “I think starting with a big win like this will boost some confidence going into conference.”

Ivy Brown had 16 points and 14 rebounds in the game as she picked up her sixth double-double of the season.

Both of the Browns have been vital to this team’s success thus far, and in just their second seasons on the Hill both have assumed leadership roles on a young WKU squad.

“We’re very proud of [Ivy],” Clark-Heard said, according to a post-game interview transcript. “She sets the tone for us. We look to her to rebound and to do the things that she has been doing this season. I was proud of our effort today in getting up and down the floor and getting a couple of easy baskets in transition.”

Freshman forward Dee Givens was the second-highest scorer for the Lady Toppers with 18 points (4-6 on three-point field goals) in 18 minutes of action.

Fellow freshman guard Kayla Smith added 10 points to the WKU effort. In combination with Givens’ effort, Smith helped take the scoring pressure off of junior guard Kendall Noble who could focus on affecting the game in other areas.

“We were depending a lot on this incoming class,” Clark-Heard said. “We knew they were winners and that they knew how to play basketball the way that we wanted them to. I know Dee can really shoot the ball and that she is offensively-minded. She’s been working with the upperclassmen and is doing everything that she can to keep getting better.”

Noble finished with an all-around stat-line as she recorded 11 points, 8 rebounds, 6 assists and 3 steals.

Team play and a commitment on the defensive end of the floor contributed to five Lady Toppers scoring in double figures on the game.

“That’s pretty awesome,” Ivy Brown said. “Anytime you have five people in double figures you can tell you’re sharing the ball and passing it to the open person. Scoring, for anyone, boosts confidence. We can’t focus on scoring, we have to focus on defense but I think that helps a lot.”

Clark-Heard has trained her players to understand how important defense is to the team’s success. On Saturday, that training paid off as the Lady Toppers held Marshall to 51 points on just 35.5 percent shooting from the field and allowed just one three-pointer on 16 attempts from the Thundering Herd.

With the win over Marshall, WKU pushed its record to 10-2 and helped keep their home record perfect, as the Lady Tops moved to 5-0 on the season inside Diddle Arena.

The Lady Toppers will be back in action next Thursday at 6:00 p.m. as they travel to Florida International for their second conference game. They will then stay in the sunshine state to play Florida Atlantic on Saturday at 2:00 p.m.