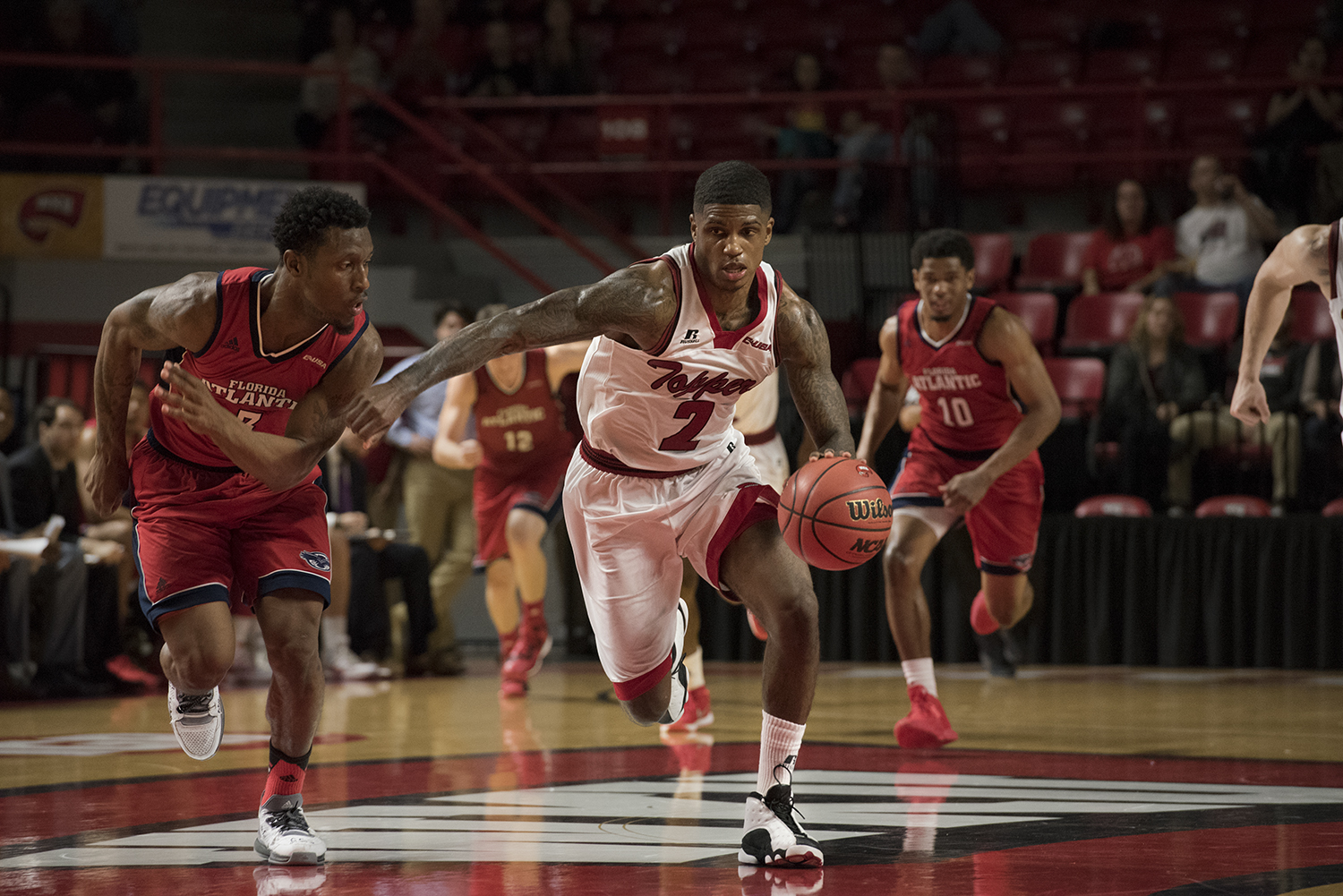 Redshirt senior guard Aaron Cosby drives the ball down the court after stealing it from Florida Atlantic junior Adonis Filer during the second half of WKU's game against the Owls on Saturday. Cosby scored 17 points on the day. Jennifer King/HERALD

Two of the top teams in Conference-USA will be coming to Diddle Arena this week to take on the WKU men’s basketball team (10-10).

The Hilltoppers will first welcome the University of Alabama at Birmingham who currently owns a 17-3 overall record and 7-0 in conference play. The Blazers are sitting atop C-USA due in large part to the program returning most of last season’s roster.

UAB is looking even better this year as the Blazers currently hold the nation’s longest active win streak at 14 victories. Last year in the first round of the NCAA tournament, the Blazers knocked off the third seeded team in their region as a 14-seed when they defeated Iowa State 60-59.

“It’s a huge challenge for us, but it’s a great opportunity,” Head Coach Ray Harper said. “I think they [the Blazers] are playing their best basketball of the year right now.”

UAB will bring a talented team to Bowling Green on Thursday night; the Blazers are currently scoring 79 points per game on the season.

“They are receiving votes in the Top 25 today, returning everyone from last year and then they add a really good 6’6 wing in Dirk Williams,” Harper said. “The biggest thing is they are very talented, but they are very, very efficient on both ends.”

UAB took down the Toppers on two occasions last year. It defeated WKU 71-66 in Birmingham and then 53-52 in Diddle Arena.

The losses seem to be lingering in the minds of the players who faced the Blazers last year. This is especially true for junior forward Ben Lawson.

“Both games last year I think we had them beat, but we couldn’t finish them,” said Lawson. “The people on our team that returned got a little bit of bad blood and want to get a good win against them. They got the best bigs in the conference. Their guards are really solid, and they are a tough team. I’m excited for the opportunity.”

The second-place team in the conference, longtime rival Middle Tennessee (14-5), will be knocking on WKU’s door on Saturday afternoon. MTSU, like UAB, also handed the Toppers a loss at home last year in their lone matchup.

Middle Tennessee brings an impressive resume to the table with wins over Belmont and Auburn, an SEC team who took down No. 20 Kentucky. WKU lost to Belmont earlier this season on Nov. 18.

With four players averaging double figures for MTSU, Harper and company will have their hands full trying to keep a team at bay that averages 72 points per game.

Giddy Potts is a name the Toppers know all too well. The sophomore guard dropped 22 points in Diddle Arena last year when the Blue Raiders bested the Tops in a 68-66 loss.  Potts is sitting at 16 points per game on the season to go along with six rebounds.

Junior forward Reggie Upshaw is also having a stellar year averaging 14 points and nine rebounds per game. Upshaw had a 21-point, 13-rebound performance in Middle Tennessee’s win over Auburn.

Sitting at 10-10 on the year with the meat of conference play upon the team, the Toppers have an intense week ahead and a chance to make a powerful statement at home.

“Being at home is coming at a perfect time. It’s good to be home,” said Harper. “We’ve got a clean slate — can’t explain it, can’t describe it. I feel like we are 0-0 right now.”

WKU is set to face off against UAB on Thursday at 6:30 p.m. and Middle Tennessee on Saturday at 7 p.m.