Hilltoppers with opportunity against No. 12 Xavier 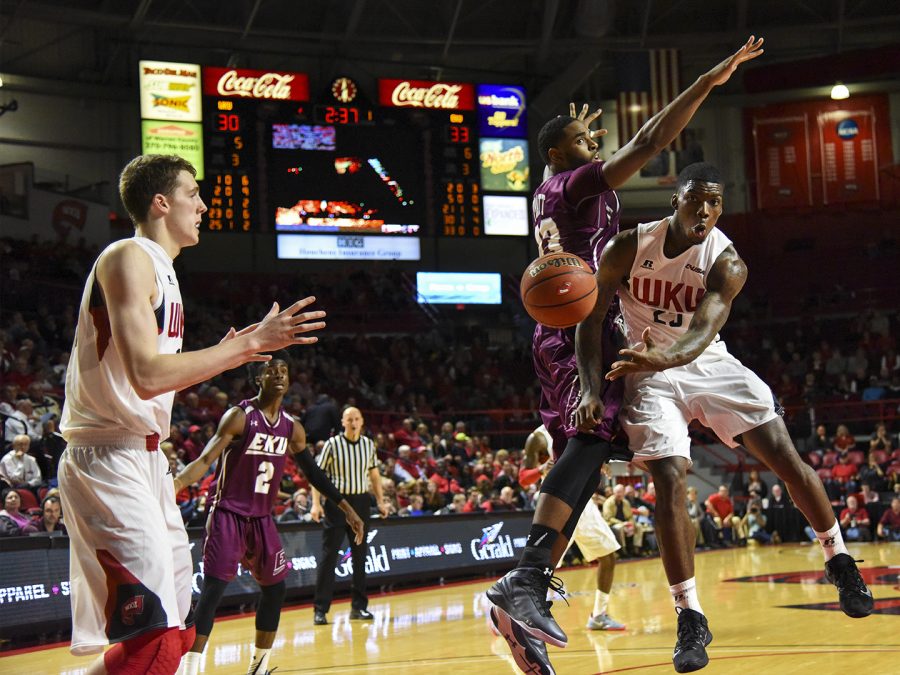 The Hilltoppers regained some momentum after they took down Eastern Kentucky off a last-second Justin Johnson basket. The sophomore forward sealed the deal with his first carrier 3-pointer on the Hill.

WKU will look to bring that momentum into its next game against the 12th ranked team in the country: Xavier.

The Musketeers are 7-0 on the season with some tough wins by large margins.

Xavier took down the Dayton Flyers (5-1) this past Sunday to win the Advocare Invitational with a final score of 90-61.

“They are [No.] 12 in the country,” Head Coach Ray Harper said. “I watched them the other night against Dayton, and I think of the teams that I have seen. They are playing as good as anyone in the country right now.”

The WKU basketball team has been experimenting with different lineups and groups on the floor.

As Harper warned in preseason, the team still hasn’t found one set combination of players with which Harper can implement his system.

But Harper is learning about the hand he has been dealt, and glimpses show the Toppers have different pieces that can work well together.

“We may even go smaller here moving forward,” said Harper when asked what lineup he envisioned against the Musketeers.

Several notable basketball analysts have tipped Xavier to make the Final Four if it continues to play at the level that it is right now.

Andy Katz of ESPN just placed Xavier in the No. 5 spot of the ESPN Weekly Power Rankings. Xavier has five players averaging double figures, and these performances will pose some threats to WKU, who struggled to keep the offense of EKU from going on runs.

Harper will look for veteran leaders like Johnson to help keep the Hilltoppers settled in the game.

Johnson is shooting .671 from the field through seven games with a team-high average of 16.9 points per game. This season he has accounted for nearly 21 percent of the team’s total offensive output.

But the Toppers will be tested by the likes of sophomore guard Trevon Bluiett, who has played more minutes than any other Musketeer and is averaging a team-high 14.3 points per game. The team will also be challenged by senior forward James Farr, who is averaging nearly a double double on the season with nine rebounds per game through seven contests and 9.4 points per game.

“It will be a great test for our guys. You know as a player and a coach you want to compete, and you are going to get that opportunity Saturday night. You are going to get a tough, defensive-minded team. We are going to have to match their intensity on both ends of the court,” said Harper.

The game is set to tip off on Saturday at 7:30 p.m. at the Cintas Center in Cincinnati.