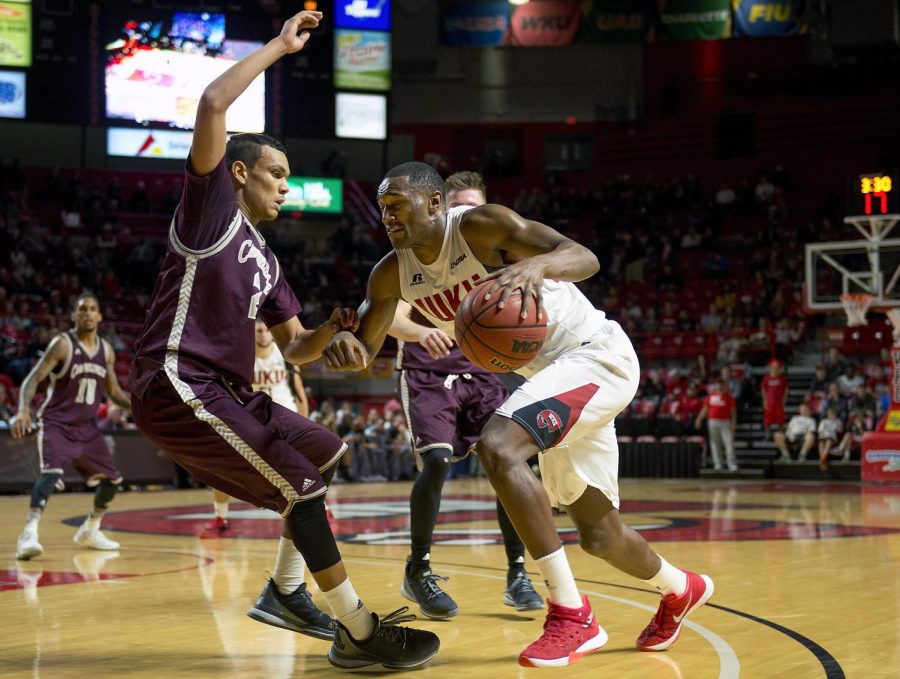 Redshirt senior forward Nigel Snipes (21) drives past Campbellsville freshman guard, Hagen Tyler (24), during the game at Diddle Arena. Snipes made the most points that night, with 24 points and three rebounds. Matt Lunsford/HERALD

With the victory, WKU improved to 6-4 on the season as the team also put together its first consecutive wins on the year after defeating Indiana State in their last contest.

“We haven’t even peaked yet,” Head Coach Ray Harper said. “We haven’t even put the car in drive yet. It’s still idling at the bottom of the hill. It takes time to come together as a team, but I do see us making progress. We are getting better as a team.”

The first half featured back-and-forth action between both teams. Senior guard LaDarius Tabb paced A&M with 12 points and 8 rebounds in the first half.

Junior guard Chris Harrison-Docks and sophomore forward Justin Johnson were big for WKU in the first half as they combined for 18 of the team’s 35 points.

Both teams proved to be evenly matched in the first half. WKU shot 37 percent from the field and A&M shot 36 percent. The rebounding margin was 22-21 in favor of A&M, while each team notched less than 5 turnovers. The Bulldogs led WKU by one point at the break.

Senior forward Nigel Snipes sparked a key Hilltopper run in the second half as he scored five straight points during back-to-back possessions. He ended the game with 17 points on 5-8 shooting from the field.

“I thought Snipes was really active tonight,” Harper said. “Nigel would not be denied in the second half. He made some really big plays that helped to win us that ballgame.”

“I feel like we are starting to get it on the defensive end,” Snipes said. “There are still break downs here and there, but I definitely see a change with this team.”

Tabb kept the Bulldogs in the game despite the run from the Hilltoppers, as the senior guard scored 27 points while adding 9 rebounds.

WKU’s team scoring proved to be more effective as Johnson, Harrison-Docks, Snipes and freshman guard Chris McNeal all scored at least 12 points for the Hilltoppers.

Junior forward Ben Lawson enjoyed a solid evening in other areas besides scoring. He notched a team-high 12 rebounds on the night while also managing to block three shots.

“I think this is our time,” Lawson said. “We have had a shaky start but everyone is starting to see the change in us and we are feeling the change. This is just the first of many games that we are going to show who we are.”

WKU will take on the nationally ranked Cardinals of the University of Louisville Saturday in Louisville, Kentucky at 11:00 a.m. The game will be televised on ESPNU.