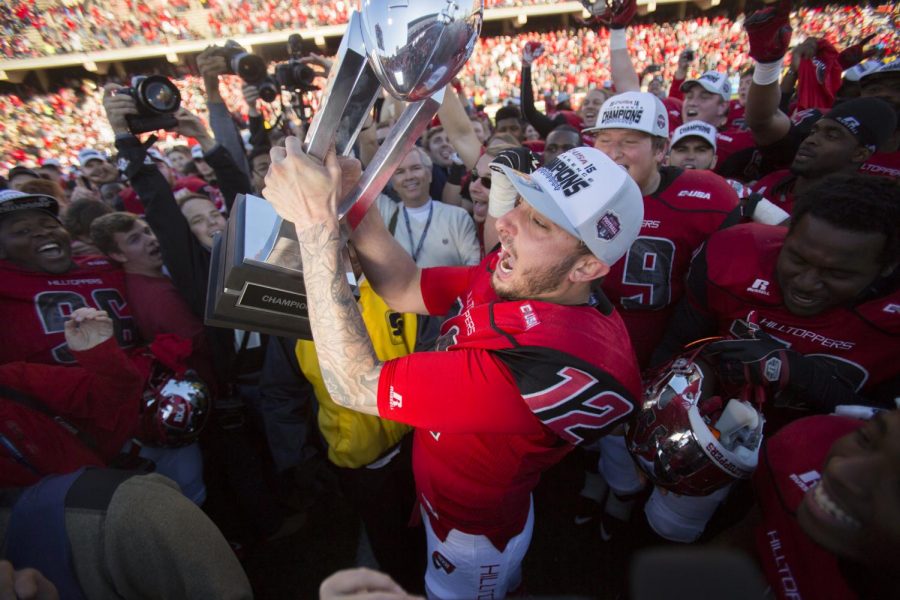 It was gut check time for the WKU football team midway through the second quarter of the Conference USA Championship Game.

Quarterback Brandon Doughty had just thrown a pick-six, and WKU was facing its biggest home deficit of the season, down 21-7, against the Golden Eagles of Southern Miss.

The moment was as big as any faced by the Hilltoppers this season, and how the team responded will be remembered by WKU fans for years to come.

Behind by two scores, WKU put together two scoring drives to tie the game before halftime. Continuing on the momentum, the Hilltoppers out-scored the Golden Eagles 38-7 from that point, marking the biggest comeback in C-USA Championship Game history, and coasting to the team’s first conference championship in the FBS era, a 45-28 victory at L.T. Smith Stadium.

“I couldn’t be prouder of our guys, this was a huge victory, big win, especially to win in that type of fashion,” Head Coach Jeff Brohm said. “All the credit goes to our players, we work hard as coaches to put our guys in the best position to win and succeed. I think we do a pretty good job of it, but it really comes down to players making plays and on both sides of the ball, and on special teams, our guys made plays.”

Brohm said he thought it was a championship performance for the players in red and white Saturday.

The WKU offense totaled 521 yards, the second highest total in Championship history, and included a memorable performance by Doughty, who earned Most Valuable Player honors after throwing for 410 yards and three touchdowns.

The success wasn’t limited to just the offense. The Hilltopper defense played its best ball when it counted, allowing only one second half score and forcing four turnovers throughout the game. 24 of WKU’s 45 points came off of Southern Miss turnovers.

In front of their home crowd, the Hilltoppers become the first team in C-USA’s 20-year history to finish undefeated in conference play and win the conference championship.

“I feel like (adversity) is good for our team,” senior receiver Taywan Taylor said. “With us being pushed to the edge, we just settled down and everybody found their rhythm, and we started playing Hilltopper football like we know how.”

It started off well for the Hilltoppers. On the first drive of the game, junior safety Brandon Leston came up with an interception on third down to give good field position to the offense. Doughty wasted no time hooking up with senior receiver Antwane Grant for a 5-yard score. WKU led 7-0 just under four minutes into the game.

After a pair of punts, the Golden Eagles were able to tie the game. A 2-yard rushing touchdown by Jalen Richard evened the game at 7 midway through the first quarter of action, and it stayed that way until the end of the first.

Meanwhile, the Hilltopper offense began to struggle. The unit went three-and-out on three-straight drives, which helped lead to the second score of the game for Southern Miss, a five yard touchdown connection between Nick Mullins to D.J. Thomas.

On the ensuing possession, Doughty was intercepted by Kalan Reed for a touchdown, a 40-yard return the Golden Eagle defender, made untouched. In a matter of three minutes, Southern Miss took a 21-7 lead midway through the second quarter.

Put into the biggest deficit at home this season, the WKU offense responded.

The Hilltoppers marched 75 yards in 19 plays, ending the drive with a 3-yard rushing touchdown by Doughty. WKU pulled within a touchdown of the Golden Eagles, 21-14, and with just under three minutes remaining in the first half, the Hilltoppers still weren’t done.

After forcing a punt, which was downed on the Hilltopper 3-yard line, WKU drove 97 yards in 7 plays, a large part of that coming from a 49-yard bomb from Doughty to Taylor. The duo found each other once more to cap the drive, a 2-yard TD connection to tie the game just before halftime.

The Hilltoppers scored 14 unanswered to tie the game at 21-21 going into halftime.

Out of the gate, the two teams started in opposite directions. The Hilltoppers first drive of the second half went three-and-out while the Golden Eagles retook the lead on a 37-yard rushing touchdown from Ito Smith.

It wasn’t until a Hilltopper interception by sophomore linebacker T.J. McCollum that sparked another score for WKU. Senior kicker Garrett Schwettman made a 37-yard field goal to make the score 28-24 halfway through the third quarter.

The Hilltopper defense came up with another big play in the third quarter as senior linebacker Dejon Brown forced a fumble, one that was recovered by senior cornerback Wonderful Terry.

The Hilltopper offense was back on the field once again and were quick to take advantage, Doughty found Taylor for the second time, a 39-yard touchdown to retake the lead. WKU led 31-28 at the end of three quarters.

After the Hilltopper defense forced a punt, the offense continued to roll. Doughty connected with Taylor again, this time a 54-yard reception down to the USM 4-yard line. Freshman running back D’Andre Ferby finished the drive with a rushing touchdown from there. WKU took a 38-28 lead, and started to pull away on the biggest stage in Conference USA.

A final turnover, an interception by senior cornerback Prince Charles Iworah, and a 3-yard rushing touchdown by Ferby was the icing on the cake for the Hilltoppers. WKU took a 45-28 lead to the buzzer and were greeted by a swarm of Hilltopper fans storming the field after the victory.

The Hilltoppers proved Saturday that they were deserving of the 2015 C-USA Champions crown and proved themselves to be one of the best teams in program history.

“We have a special group of players, we have a special group of coaches,” Doughty said. “I thought after my fifth year, getting a sixth year that we had 16 starters coming back and I thought then we have a heck of a chance, an opportunity, to do something this program has never done before…To do this at home, at Houchens Smith Stadium, is something incredible and something I’ll tell my kids about one day.”