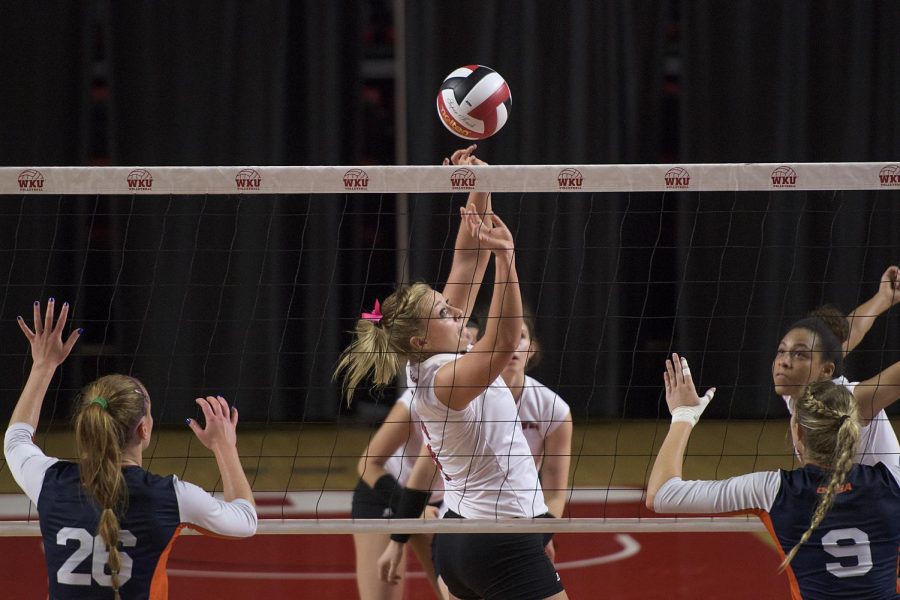 The WKU women’s volleyball team (31-3) is ready to start the second leg of its postseason.

After winning their second consecutive Conference USA regular season and tournament championships, the Lady Toppers are No. 20 in the nation in the AVCA poll and have earned the No. 13 spot in the RPI rankings.

After the selection show ended last Sunday night, the attention has shifted to the Lady Tops’ first-round opponent: Arizona (19-13).

Head Coach Travis Hudson and the team were excited for the community to show as much support as they did at the viewing party for the selection show.

“It has been little by little over the years that kids have garnered more interest from the community. It was an enjoyable night and good for the players to get a chance to talk with fans,” Head Coach Travis Hudson said.

Despite the top 16 teams in the RPI typically being given the home advantage and getting to host first-round opponents, the Lady Toppers instead will be traveling across the country to Utah to take on Arizona.

“Out of the top 15 RPI’s, the only team that didn’t get to host was the [No.] 13 team, which was us,” Hudson said. “I’ll be mad about that later. Do I think that these kids deserved a better draw? There is no question, but right now the focus is on Arizona.”

Although Arizona has a record that might not be as impressive as the Lady Toppers’, it plays in the Pac-12 Conference, which garners multiple Top 25 teams each season.

The Lady Topper volleyball team is being careful not to underestimate its opponent, which has been tested at a high level multiple times this season.

“They play in maybe the toughest volleyball league in the country. They have 13 losses, but probably eight or nine of them were against Top 20 teams. They are a terrific team — a really difficult first-round matchup,” Hudson said. “They are big and physical and used to playing high-level competition.”

Hudson said the team may not have gotten the draw it deserved but that he and the staff are looking past that and are focusing on what they can control: how their team plays volleyball.

WKU has a talented group taking the court this year with leadership, skill and a since of unity. The Lady Tops are focusing on consistency at the team level rather than individual level.

“It’s a constant battle about getting a little bit better every day, and I think this group has done that, and I think we are playing our best volleyball right now,” Hudson said.

Arizona, playing in a big-time conference and having a talented squad in its own right, will be a tough matchup for the Hilltoppers.

Junior outside hitter Kalei Mau was named to the Pac-12 all-conference team along with junior setter Penina Snuka. Mau has thrown down 489 kills — over 100 more than WKU sophomore Alyssa Cavanaugh — on 1,486 attacks to go for a 4.3 kills per set stat line.

“Left side they have a girl, No. 10 Mau,” Hudson said. “Alyssa has taken like 900 swings for us. Mau has taken almost 1500 swings for them, she is a terrific volleyball player and certainly somebody we will have to try and control.”

Hudson is proud of what his team has accomplished so far this season and knows he has a special group heading out to Utah. The energy surrounding the team is high, and the players and coaches are excited for the challenges that lie ahead.

“I think offensively we are as good as anybody; we have to focus on defense,” Hudson said. “I think if you look at Arizona’s hitting percentage, that will tell the tale. If we hold them in the very low 200s, I think we win the match. If we let them hit somewhere around 300, it’s probably bad news.”

The game will take place at Brigham Young University’s Smith Fieldhouse in Provo, Utah, on Friday at 6 p.m.