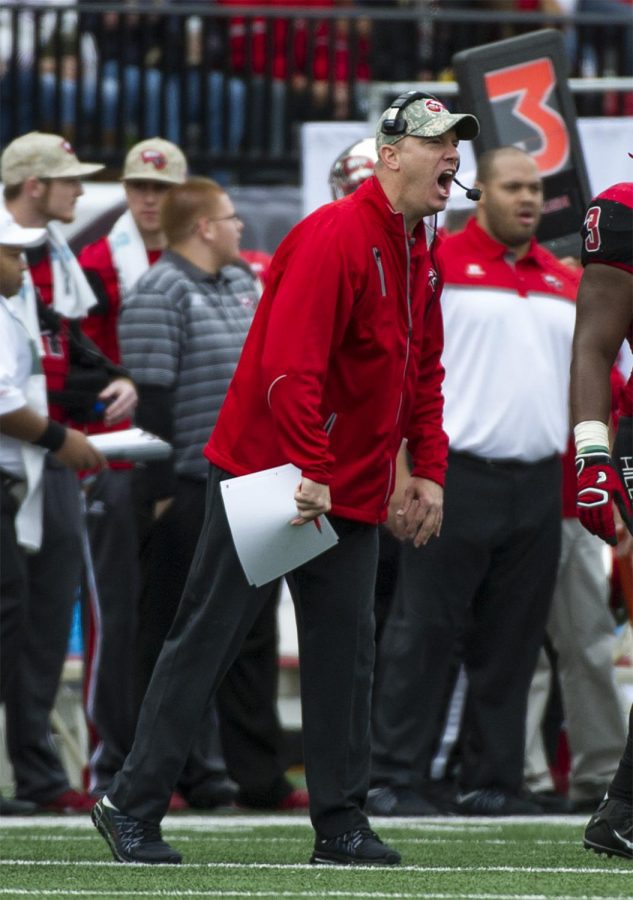 The last two seasons for the WKU football team have been record-breaking years.

During that span, the Hilltoppers have become one of the nation’s premiere passing offenses, won their first FBS bowl game and are now competing for their first conference championship since 2002.

In his time at the helm, WKU has gone 18-7 overall in its freshman and sophomore seasons in Conference USA.

The culture has changed from a program that recently held a 26-game losing streak to a winning environment that has the team ranked No. 27 in the country.

Much of this success has to do with the changing of the guard in hiring Brohm.

His approach to the game has made both players and fans believe in the Hilltopper football program once again.

“He’s the best I’ve been around. He’s a player’s coach; he understands what it takes to win,” offensive coordinator Tyson Helton said. “He understands the issues they go through. He knows what’s really important, and he doesn’t let the little things get in the way.”

Helton believes Brohm has also brought things to the program that have nothing to do with football at all.

“He’s a family guy first. Faith, family, football is what he always talks about,” Helton said. “It’s a joy every week to go work for a guy like that.”

Brohm has coached the Hilltoppers into a rare opportunity.

This Saturday as the Hilltoppers take on Southern Mississippi at Smith Stadium, WKU will be trying to win its first conference championship at the FBS level.

Throughout the 10 conference championships in the program’s history, only five of those teams also reached double-digit wins, something this season’s 10-2 team has already achieved.

When asked where winning a conference championship would rank on his career accomplishment list, Brohm did not hesitate in his response.

“It would be No. 1. I’m a young head coach, and to be able to win a championship, it’s really what it’s all about,” Brohm said. “It’s what you work towards the hardest as a player and as a coach.”

Brohm noted the shared sense of success on the team — a feeling that each individual player helped made this progress happen over the last two years.

“To do it with this program, who I feel great about the progress we made, I feel great about the type of kids we have in our program,” Brohm said. “I think they are all hungry; they all have a chip on their shoulder. They all are excited to be in Conference USA and take it to this championship level and try to win.”

With the timing of Brohm’s hire and the shift to C-USA, a completely new era of WKU football was born that has had just one goal since inception: a conference title.

“It’s something a lot of our guys have worked extremely hard for. We don’t talk about the prize at the end a lot, but we work extremely hard daily to get there, so I’m happy for them as much as anyone,” Brohm said.

Brohm has a storied history as a player before he became a coach.

As a former three-year starter for the University of Louisville, Brohm ranks among the all-time leaders for passing yards, touchdown passes, completions, total offense and completion percentage. After college, he went on to play for multiple NFL franchises. After his playing career ended, he coached at programs such as Louisville, Florida Atlantic, Illinois and UAB.

When Brohm came to WKU in 2013 as the assistant head coach and offensive coordinator, he had already proven himself and began immediately to connect with his new players.

“He’s a complete players’ coach —reminds me of Coach Taggert. He cares a lot about us, how we practice,” senior offensive lineman Forrest Lamp said. “If we are having a rough week, he will take the pads off. Since he has played before, he knows the game, and he knows we need rest, and he looks out for us, and that’s the most important thing.”

Despite being the head coach for only two seasons, there are rumors that this may be Brohm’s last season as a Hilltopper. WKU has seen short stints in recent coaching history. Willie Taggert, 2010-12, lasted three seasons while Bobby Petrino, 2012, left after one 8-4 year.

Whether Brohm leaves or stays, Hilltopper fans have to recognize his impact on the program and value the success he has brought to the team.

If WKU wins Saturday, Brohm will secure a conference championship quicker than any coach in program history. Jimmy Feix, whom the field is named after, got his first league title in year three.

When asked if he expected to be so close to the championship so soon, Brohm reminded fans of his coaching philosophy.

“I wouldn’t say I expected that, no, but I try not to look too far down the road, and the same with our team: We just try to get better and win football games,” Brohm said. “I think we’ve done that to this point. We are pretty good at taking things one game at a time. But now we’re here; we’re at the culmination of it all. You’re hopeful you can piece it all together and all three segments can all play well.”