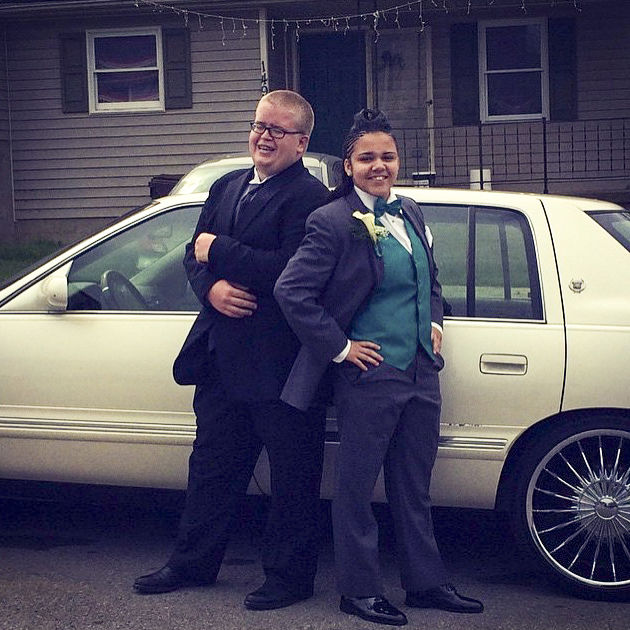 She was always smiling.

And everywhere she went, she had a presence.

Sullivan was a freshman from Winchester.

On Sunday, Sullivan was pronounced dead by the Warren County Coroner’s Office. Sullivan’s death was confirmed as a suicide.

On Sunday, the little sister Wood had never wanted but had found was gone.

“I’m glad she [Sullivan] came into my life,” she said.

Wood had only known Sullivan since the beginning of the semester, when Sullivan started working in the Tower Food Court at Popeye’s.

Last Thursday, Sullivan had made a pinky promise with Erie, Pennsylvania, freshman Daryn Bailey, her co-worker at Popeye’s.

Bailey wanted to quit her job — the same job Sullivan had previously quit because the pay wasn’t enough.

“Shanece, me and her, we were like hand in hand,” Bailey said. “I pinky promised her that I wouldn’t quit if she came back or if she got her job back.”

Sullivan got her job back, Bailey said.

“She just never came back.”

Bailey said Sullivan always picked on her, but that’s how their friendship worked.

This wasn’t meant to happen, Bailey said; it didn’t seem like something Sullivan would do.

There are many factors that contribute to suicide, Karl Laves, associate director of WKU’s Counseling and Testing Center, said.

“Many factors contribute to suicide, but most all of these factors have a common theme: the loss of hope,” Laves said.

“I didn’t know it was this bad,” Wood said. “Around me, she was always laughing.”

But her laugh was memorable and her smile, beautiful, Wood said.

“She was gorgeous,” she said.

Sullivan was always willing to help others.

“She offered meal plans,” Wood said. “She knew she wasn’t going to use all of her meal plans, so anyone who came through the line [at Popeye’s] who couldn’t pay for their meal, she’d be like, ‘Oh, use my card.’”

A GoFundMe page was set up to cover the costs of Sullivan’s funeral services. Many WKU students — some who did not know Sullivan — have donated money, Wood said.

Sullivan’s services will be held Saturday, Nov. 21. Visitation is at 10 a.m., and the funeral is at 12 p.m. Arrangements are under the direction of Keith P. Clark & Son Funeral Home in Winchester.

On Sunday, Wood messaged Sullivan, asking when she was coming in for work.

“I just wish she had talked to me first, got help or reached out,” Wood said.

Laves said the prevalence of suicide remains at about 1 percent of the population. Suicide is higher among the elderly, however, and is the second leading cause of death for young adults.

Laves said about 20 to 25 percent of college students, when surveyed, say they have been depressed and might have thought about suicide.

When having thoughts about suicide, the first step is to tell someone you trust, Laves said. The next step is to seek professional help.

“Students can use the university counseling center, or they can find a counselor or psychologist in the area or their hometown,” he said.

Considering medication is also a good idea because of antidepressants’ affordability and effectiveness, he said.

Sullivan was someone who could bring joy to you no matter what mood you were feeling, he said.

“She was always there to lend a helping hand no matter the task,” Spears said. “She was a shy individual, but once you got to know each other, you couldn’t find someone so wonderful as her. She cared so much for her family and friends.”

There was never a dull moment, Spears said.

“She worked so hard at whatever goals she set,” he said. “I’ve never seen someone so determined as her. It’s sad to see such a beautiful soul leave so soon.”

A student should never feel ashamed about how they feel, Laves said.

“Depression is real,” he said. “It happens for reasons that are not our fault, and there are good solutions that work.”

“What we need to be more effective — to reach more students that are struggling — is for everyone to speak up about depression and suicide,” he said. “We need to do a better job as a community to reach out to people who are struggling, to help them not be ashamed and to get the help they deserve.”

For this reason, universities are spending more time doing information sessions for students, faculty and staff, Laves said. WKU’s center has QPR training, which is a nationally known suicide prevention program designed for people who are not mental health professionals.

For those who have lost someone to suicide, counseling can be helpful, he said.

No one is built to make it through the world by themselves, Laves said.

“Any one of us, under certain conditions or circumstances, can begin to wonder if we want to go on living,” he said. “That is part of being a human.”

We need to accept that we all need help from time to time, Laves said. We need to open to the idea that we are “our brother’s and sister’s keeper,” he said.

“We need to get the word out that it is okay to feel bad,” Laves said. “Suicide is a permanent solution to a temporary problem.”

Wood said it feels like a dream. Knowing Sullivan, she said, it doesn’t feel real that her former co-worker at Popeye’s and the little sister she never knew she wanted had taken her own life.

Wood said she will always remember the way Sullivan laughed and how often she smiled.

If you or someone you know is experiencing symptoms of depression or suicidal thoughts, contact WKU’s Counseling and Testing Center at 270-745-3159 or call the National Suicide Prevention Lifeline at 1-800-273-8255 to seek help.