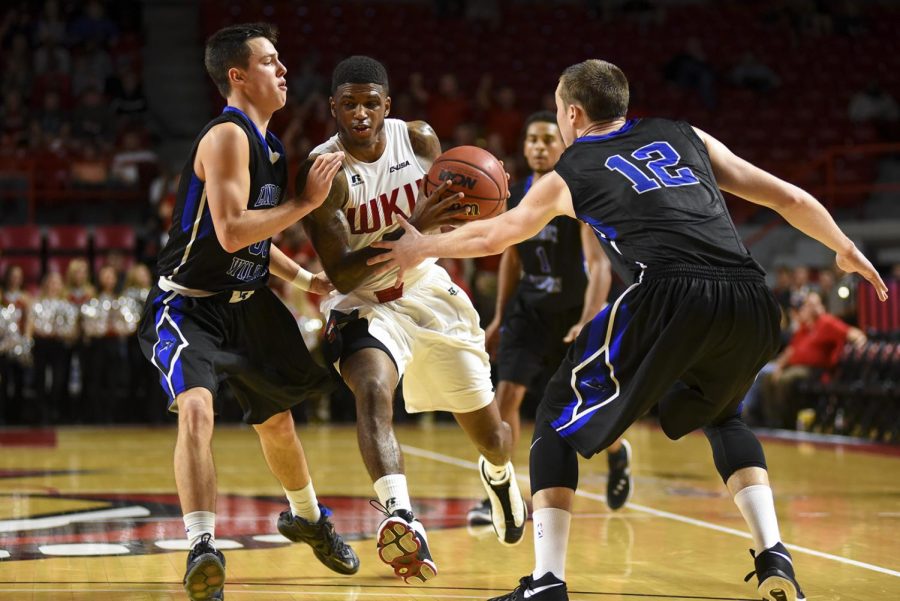 WKU's guard Aaron Cosby (2) drives towards the basket during the Hilltopper's 84-71 win over Lindsey Wilson College on Monday at Diddle Arena.

The WKU men’s basketball team defeated Lindsey Wilson College in front of a home crowd at Diddle Arena on Monday night by a score of 84-71. The Hilltoppers shot an accurate 50 percent from the field in the exhibition game.

Thanks to a strong defense in the first half, WKU’s offense got going in transition as the Hilltoppers scored 46 first-half points to take a 19-point lead into halftime over the Blue Raiders.

“I thought we were really good in the first half,” Head Coach Ray Harper said. “That half really gave a glimpse of what we are capable of because we really shared the ball and made the extra pass.”

In the first half, University of Illinois transfer and redshirt senior Aaron Cosby gave huge spark to the Hilltoppers. Cosby scored 15 points in the half on 5-7 shooting.

Cosby finished the game with 22 points with three assists and three rebounds.

“He gave you a glimpse of his talent tonight,” Harper said of Cosby. “He can score in a variety of ways, and he can make shots. He really got on a big roll that first half. He is a guy that can get us buckets on a nightly basis.”

However, Cosby was not the only newcomer to make an impact on Monday night.

Freshman guard Chris McNeal of Jackson, Tennessee, controlled the pace of the game early for the Hilltoppers with his tempo and athletic display. In just 27 minutes of playing time, McNeal scored six points while also adding seven rebounds and four assists.

McNeal’s play at the point guard position helped the Hilltoppers get an early jump on the Blue Raiders.

“I just wanted to come out and work because when you work hard, good things happen,” McNeal said. “This team has a lot of depth, and if you just play hard on this team, playing time will be found.”

Redshirt junior guard Chris Harrison-Docks also provided a bright spot for the Hilltoppers in the matchup with 15 points on 5-10 shooting from the field.

However, the exhibition as a whole did not go as perfectly for the Hilltoppers as the first half did.

“In the second half, our defensive energy level wasn’t as good,” Harper said.

The Blue Raiders outscored WKU 44-38 in the second half thanks to a sluggish start offensively in the half.

“We just kind of ventured off and started hooping instead of executing like we did the first half,” Harper said.

WKU wore down the Blue Raiders down the stretch thanks in large part to balanced team scoring.

“That was just a typical first time out game with growing pains — especially with having so many new guys,” Harper said. “There were definitely a lot of bright spots and a lot of areas where we still need to get better.”