Hilltoppers relentless in win over FIU 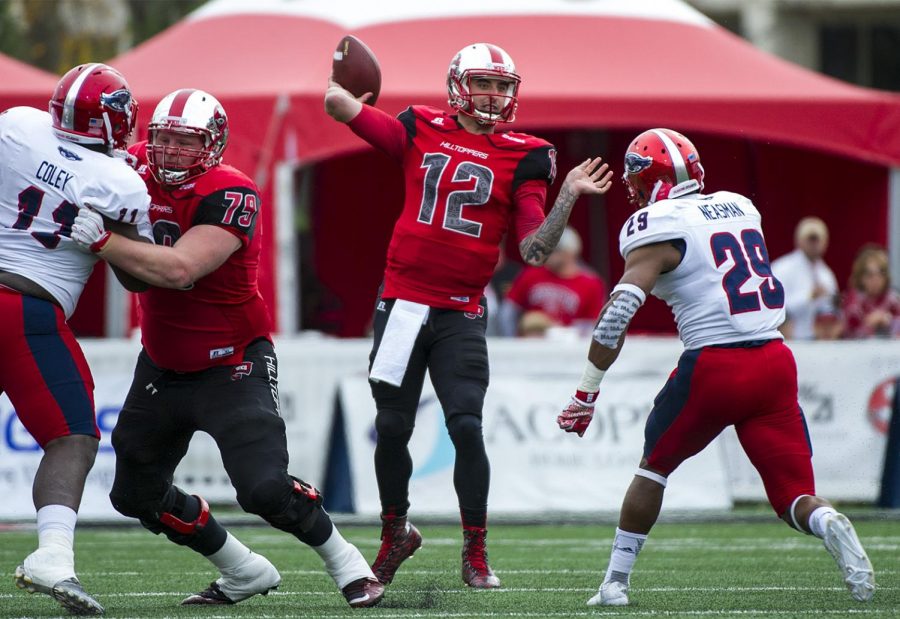 The WKU football team came into Saturday’s game at Florida International University with one thing on their mind: staying motivated.

In a game where a win or loss would not effect their championship hopes, the Hilltoppers came to play in Miami, defeating the Panthers 63-7. In the process, WKU secured its ninth win on the season, a record for the school in its FBS era.

FIU came in desperate for a win, strutting an undefeated record at home and one win away from bowl eligibility There were questions if the Hilltoppers (9-2, 7-0) would be able to match their intensity.

WKU showed no rust form the bye week jumping out to a 21-0 lead in the first quarter and eventually taking a 35-0 lead into halftime. On the second play of the game, sixth-year quarterback Brandon Doughty found junior receiver Taywan Taylor for a 73-yard touchdown pass off a flea flicker.

The play marked the third flea flicker touchdown this season and also gave Taylor the school record for most receiving yards in a single season. Taylor finished the game with three catches for 100 yards.

After two forced three-and-outs by the Hilltopper defense, redshirt freshman running back D’Andre Ferby decided to get in on the fun, rushing for his first touchdown of the day, a 1-yard TD midway through the first quarter. Before the end of the quarter, sophomore cornerback Joe Brown registered his first interception of his career and Doughty found senior receiver Antwane Grant for a 5-yard score to extend the lead to 21-0.

In the second, WKU continued to play at a high level despite heavy rain at FIU Stadium.

Ferby scored his second touchdown of the game, a 3-yard touchdown rush, and while the Panthers were on their best drive of the half, senior cornerback Wonderful Terry returned an interception 91-yards for the score. The play marked the first defensive touchdown of the season for the Hilltoppers and the fourth for Terry’s career.

Coming out of halftime, the Hilltoppers continued the onslaught. Ferby scored his career-high third rushing touchdown early in the third quarter. Ferby only finished with 12 yards on the game while junior running back Anthony Wales finished with 110 yards.

Doughty threw his final touchdown pass of the game in the third, a 22-yard connection to senior receiver Nicholas Norris. The score marked the 100th career touchdown pass for Doughty. He finished the game with 224 yards and three touchdowns despite being pulled in the third quarter.

The scoring continued. Grant had a 59-yard rushing TD near the end of the third to make the lead 56-0. Finally, FIU found the end zone, Alex Gardner had an 18-yard rushing TD.

The game ended with 5:03 left in the fourth quarter after a weather delay.

The win marked the tenth-straight win over Conference USA opponents for the Hilltoppers.

WKU’s next game will be Friday, November 27th against C-USA foe Marshall. The winner will advance to the C-USA championship.