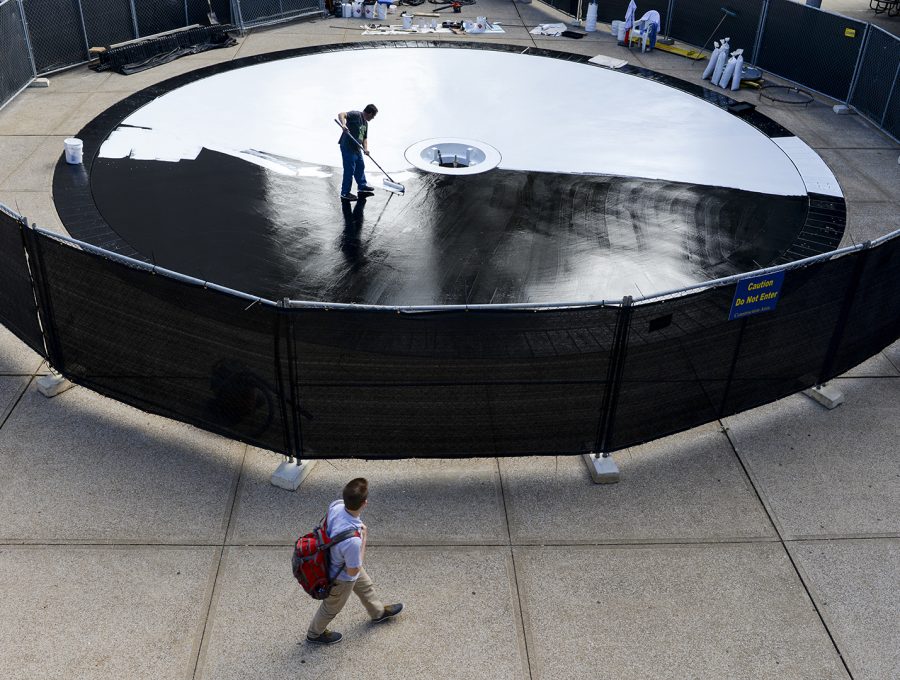 The large circle of tall black fencing that blocks easy access between the Fine Arts Center and Java City has piqued interest among staff and students.

Library security coordinator Doug Wiles has gained an interest in the fountain project particularly because he passes by the site daily on his way to work.

The fountain, Centennial Mosaic, displays a large red, white and yellow sundial that is positioned between FAC and Helm Library; it is currently being restored. Water and natural damage due to the elements deteriorated the state of Centennial Mosaic. Mechanical upgrades are being completed during the project too.

Bryan Russell, chief facilities officer, said the update will make the fountain safer. In the past, pieces of the mosaic would become slippery to walk on and occasionally crack and chip, a safety hazard for people who often play in the fountain in warmer months.

“It was an opportunity to make a better surface … to be better enjoyed by everyone,” Russell said.

Wiles said he had noticed how the fountain needed some upkeep after several years of wear and tear.

“I noticed that some of the tiles were missing before they started the repair,” Wiles said.

He said he is excited to see what the restored fountain will look like once renovations are completed.

“I think it’s great they are restoring it,” he said.

Ben Johnson, assistant director of planning, design and construction, said the project’s main focus is to restore the fountain to its original state with the addition of an updated mechanical system.

“We are essentially replacing the fountain mosaic,” said Johnson.

Johnson said the project should be completed relatively quickly.

“I’m hoping to have it done in the next two weeks,” said Johnson.

Workers are laying down a waterproofing sealant to protect the mosaic from weather damage. The sealant cannot be laid down in cold or rainy weather, so it is possible that the exact date of completion could vary.

Johnson said the sealant layers below where the mosaic will be are black but that the color is only temporary.

He said the mosaic will essentially look like it did when it was initially completed. The project’s completion, however, is also dependent on other factors.

According to Johnson, the overall budget for the restoration and mechanical renovation of the fountain was $80,000.