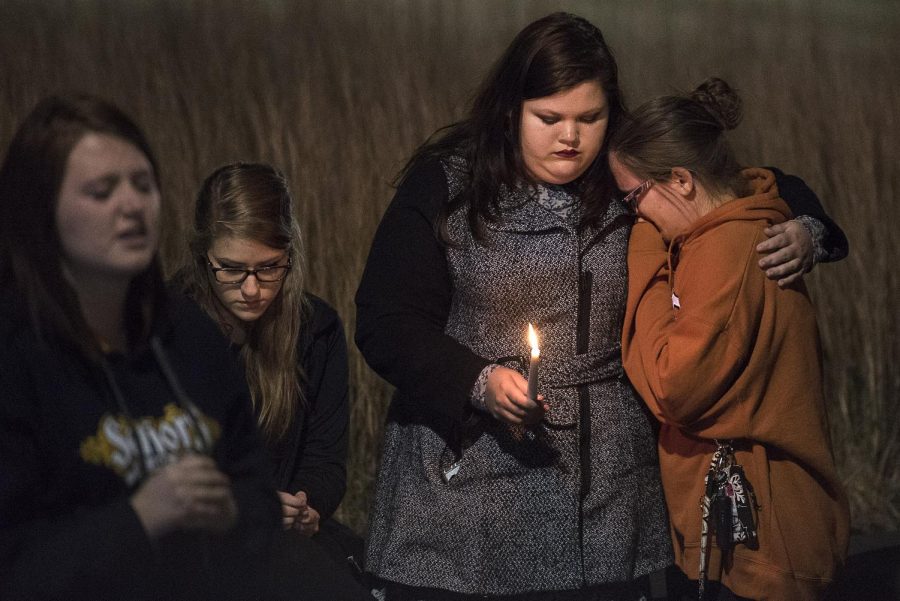 A crowd gathered outside of Pearce Ford Tower for a candle light vigil, to remember a student that died in PFT, Sunday, Nov. 15. Over 150 students, staff and community members attended the vigil. Nick Wagner/HERALD

With candles in hand and some tears, more than 150 students gathered outside Pearce-Ford Tower in silence on Sunday night to pay respects to a lost peer.

Students came together outside PFT for a candlelit vigil in memory of 18-year-old freshman Shanece Sullivan who died earlier Sunday afternoon.

On Sunday, Sullivan was pronounced dead by the Warren County Coroner’s Office at approximately 1:50 p.m. The coroner’s office confirmed that Sullivan’s death was a suicide.

Students coordinated a vigil in remembrance of Sullivan.

Owensboro freshman Kiersten Martin did not know Sullivan but came to the vigil because she felt it was the right thing to do.

“I felt I needed to pay my respect to her and her family,” Martin said.

One student broke the silence at the vigil and offered words of encouragement, opening the floor for others to say nice words about the student who died.

Various students began to approach the middle of the circle and offered up prayers, encouraging words and song selections like “Amazing Grace.”

Russellville freshman John Essex was comforted by his friends as the vigil continued.

Essex did not know the deceased personally but said he had met her a couple of times. Essex remembers he always saw her smiling.

“You never know what someone is going through or who is having a rough time,” Essex said.

He shed tears because his heart grieves for the family, he said.

“I feel bad. I feel bad for her family because it’s so close to Thanksgiving, but I know she’s in a better place,” Essex said.

Louisville freshman Kendra McCubbin said she has experienced hardships throughout her life and feels that friendly support and talking to others can change situations.

“I wish there were more moments we got together like this,” McCubbin said. “It’s bittersweet that we are honoring a student like this.”

Housing and Residence Life staff provided girls in PFT the opportunity to express their thoughts and concerns with workers from the Counseling and Testing Center.

McCubbin has utilized the counseling services provided in the center but believes they are poorly advertised. He said the center would be more helpful to students if they knew more about it.

Karl Laves, associate director of the center, said staff do their best to advertise the center’s services.

“We hand out brochures in the load of printed stuff freshman are given,” Laves said.

According to Laves, the average college student is given many papers to read, and the center cannot be sure if students read them all.

“Word of mouth is also another way we get the word spread about our services,” Laves said.

“Some people don’t know about this [counseling] resource, so they feel left out, and no one should feel left out,” Louisville sophomore Jenna Florence said.

Laves said he has dealt with student deaths “too many times” before and that they do not get easier.

“It’s a sad reality for universities,” Laves said. “Every year we work hard to save someone.”