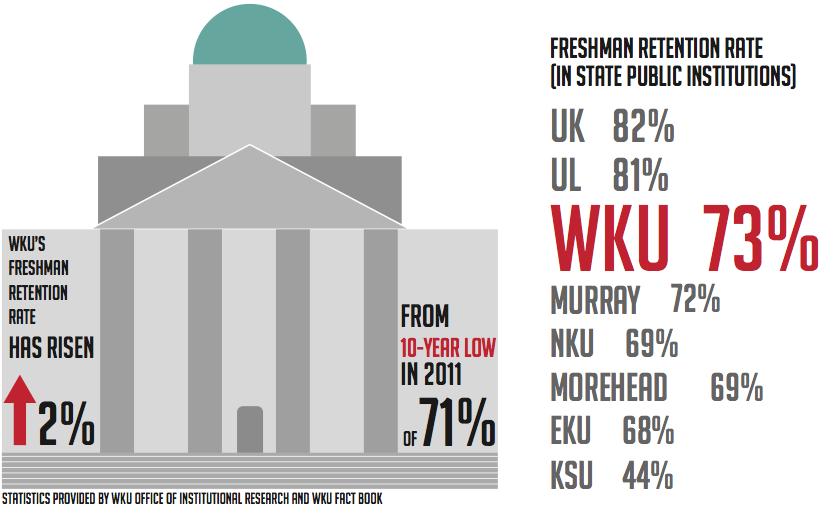 In the last few years, retention rates have shown signs of slight improvement, according to Brian Meredith, chief enrollment and graduation officer.

Meredith said while retention has hovered around 70 to 73 percent in recent years, WKU has come up percentage points slowly over the past three years. As of the fall 2013 semester, the most recent year for which data was available, 73.07 percent of students remain enrolled after their first year.

Meredith said this gradual bumping up is a good sign. He said if most comprehensive institutions can move their retention percentages up a point or even a point and a half, then they’re doing quite well.

“That’s not an easy task to do that,” Meredith said.

Sharon Hunter, coordinator of college readiness, said that in comparison to benchmark institutions, WKU falls right in the middle.

Hunter said benchmark institutions were selected by WKU and the Council on Postsecondary Education as institutions similar to WKU that are good choices for the university to emulate.

Hunter said these institutions have different admissions criteria, so they may be a little more selective in regards to admissions.

In regards to in-state institutions, the freshman retention rate varies from 44 percent at Kentucky State University to 82 percent at the University of Kentucky.

Meredith said retention rates have shown these improvements due to changes and improvements made in retention programming. He said the Academic Advising and Retention Center has analyzed all of its programs relating to retention and asked how it can do its job better, faster and more efficiently.

“AARC has new programs. They have revamped old programs. They are continuing to look at our students and the students’ needs and where the students are and trying to meet them,” Meredith said. He added that AARC tries “to address those needs in a timely, early fashion — to capture them before things become problematic for the students.”

He mentioned the Best Expectations Program as one of the programs that had been reorganized and revamped to become more efficient. He said BEP had historically been a somewhat passive program and is now more hands-on and facilitated with AARC staff, advisers and other students.

Russell Curley, the AARC director, said under the old BEP program, a student received one and a half hours of contact per semester. Under the new program, contact time was increased to 10 hours a semester with the added benefit of it being a group process, meaning students help support other students.

“So far we’re really excited. We think it’s going to cost a lot less money, it’s going to have a lot more contact hours, and we won’t know until the end of the semester, but we’re hoping the students are much more successful also,” Curley said.

Curley said other services such as tutoring were made more efficient among other changes to provide more service for less cost.

Meredith said over time he would like to move the dial higher from 73 percent after one year to the 80 percent range. He said with the reorganization of AARC’s services and programs, raising admissions standards and bringing in a well-prepared academic class, the goal of 80 percent can be achieved over time.

“That’s not a quick goal to ascertain, but it is a worthy goal to work towards, and I believe we can do it,” Meredith said