Backcourt looks to be strength of Hilltopper unit 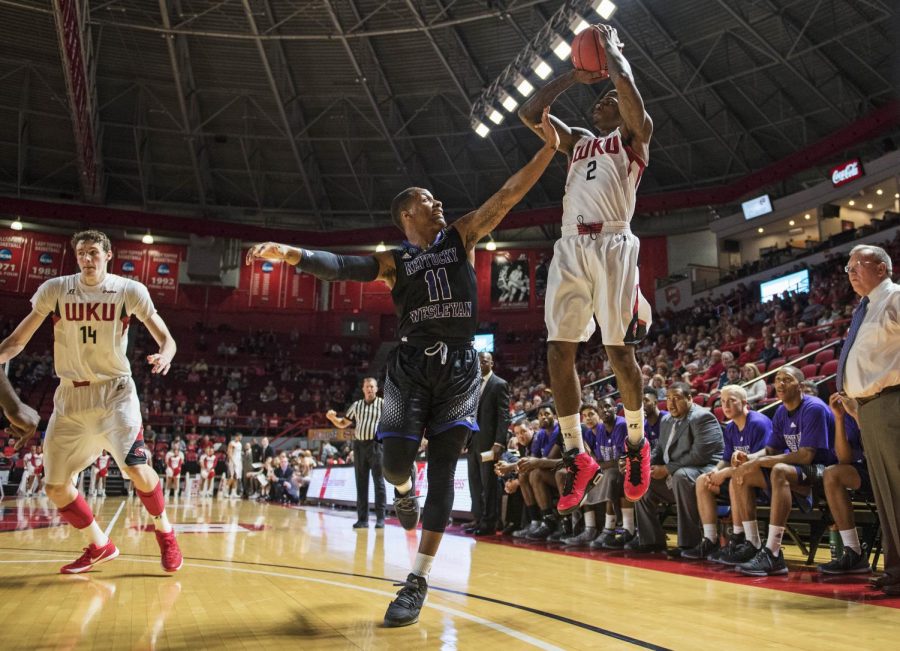 Redshirt junior Chris Harrison-Docks finished third on the team last year in scoring with 11.1 points per game and is the only returning player in the WKU backcourt.

With the loss of T.J. Price and Trency Jackson to graduation, the Hilltoppers will look to newcomers this season to help fill that void.

Despite graduations and a slew of transfers, Head Coach Ray Harper appears to have accomplished that goal with recruiting in the offseason. Harper and company have added a few already-tested pieces to help Chris Harrison-Docks and the rest of the unit move the ball effectively.

Harrison-Docks said the entire backcourt group was very talented. “They give us a lot of options with what we can do lineup wise,” he said.

The backcourt has been mentioned early on by Harper as being the strength for the team this year.

“I really think that the backcourt is going to be the strength of our team. I think we are a little more athletic in the backcourt,” Harper said. “We have the potential to break guys down off the dribble, which has been a little bit of a concern for us the past couple of years.”

The Toppers have shown glimpses of solid play in the exhibition games.

The backcourt scored 103 points in the two showdowns against Lindsey Wilson and Kentucky Wesleyan and will look to anchor the team this season after the Hilltoppers were outscored in the paint on both preseason occasions.

“I’d like to see the bigs work hard as a group. We can use two 7-footers on the court at the same time. I’m really impressed with what we have been doing as a post group,” junior forward Ben Lawson said. “This year we are very athletic and fast. We can run the floor a lot more, and I’m excited for the backcourt and what they can do this year.”

With the new talent coming in at the guard position, the Toppers will look to mold a backcourt that can compete with the top teams in the conference.

“I feel a lot of chemistry on this team. We have a lot of guys ready to work,” Cosby said. “I’m embracing the leadership role, and I’m looking forward to it. Coach has been pushing me to be more vocal; I feel like speaking up will help this team.”

The Tops were picked to finish sixth in Conference USA this year.

UAB was picked as the favorite to win C-USA this season and brings the league tournament MVP back on the court as their leading scorer from last year. Redshirt senior Robert Brown averaged 13.7 points per game and is looking only to improve from his MVP season.

Old Dominion made an appearance in the Top 25 last year and is picked to finish second in the conference. The Tops were able to knock it off at home last year, when the Monarchs were nationally ranked, by a score of 72-65. With a group of big guards featuring Aaron Bacote, Jordan Baker and Trey Freeman, Old Dominion poses a threat throughout the league.

Middle Tennesse, the Toppers’ top rival in the league, is picked to finish third in the conference. Perrin Buford is returning for the Blue Raiders averaging 8.1 points per game and is looking primed to take things into his own hands in his final season. The Raiders are also looking forward to see how Gulf Coast State transfer Quavious Copeland plays; he averaged just over 10 points per contest last season.

But even with impressive backcourts across the league, Harper believes his bunch could turn some heads this season.

“Fred [Edmond] is not just a scorer. I think the most underrated part of his game is his ability and willingness to share the ball. When you look over and you have Aaron Cosby and [Harrison-Docks] and Chris McNeal spotted up, that’s a good feeling,” said Harper. “Biggest thing I’m preaching to [Edmond] is that I think he can maybe be our leading rebounder. I don’t know if we have had anybody that can rebound the ball from the perimeter as well as he can since Sergio Kerusch.”

With the addition of Edmond and Cosby, who dropped 22 points in the team’s first outing, the Toppers should be set and ready to compete in conference play.

“I can rebound and score, and I play hard. I always grabbed boards, so I’m ready. I’d like to play a leadership role,” Edmond said. “I’m an all-around player. I like to pass the ball and make guys look good. I think we will be fast, and we have some good shooters.”

The backcourt is full of young guys this year with a potential to grow if they can link up throughout the season.