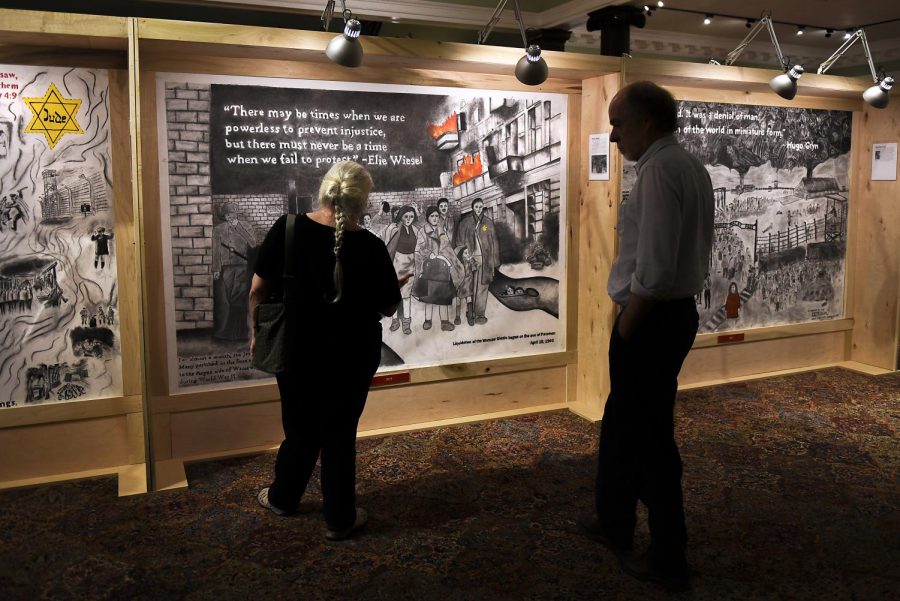 Libby Davies, left, and WKU English professor Lloyd Davies, right, view murals in the "Never Again: Nazi Germany and the Holocaust" exhibit in the Kentucky Museum on Wednesday. The murals were created by students during VAMPY, the Summer Program for Verbally and Mathematically Precocious Youth, put on by the WKU Center for Gifted Studies. "Every student should learn the lessons of history," Libby Davies said. "This exhibit is a powerful illustration of this." Gabriel Scarlett/HERALD

A collaborative mural exhibit showcasing Nazi Germany and the Holocaust ended this Thursday.

Middle and high school students created the exhibit “Never Again: Nazi Germany and the Holocaust.” The exhibit has been displayed at the Kentucky Museum in the Kentucky Building since Oct. 27.

“Never Again: Nazi Germany and the Holocaust” features 18 murals created by students in the Summer Program for Verbally and Mathematically Precocious Youth at WKU.

VAMPY offers a class focusing on Nazi Germany and the Holocaust. Each year, students in the program collaborate to create a mural. The murals were collected over the years to create the exhibit.

Brent Bjorkman, the director of the Kentucky Museum, said he thought the exhibit had been well received by WKU students and other visitors who were interested in the topic.

“Visitors have been very engaged and reflective,” he said. “I can’t imagine what it must have been like for the students to create these pieces.”

Megan Hayden, a West Point freshman, came to see the exhibit on Tuesday. She said she learned from the exhibit.

“Sometimes you forget about this sort of thing,” she said. “This exhibit puts it into perspective. You don’t let things like this happen again.”

The Center for Gifted Studies presented the exhibit. Sam Oldenburg, coordinator of technology and communications for the center, said he can tell the exhibit is making an impact on students. He believes they now have a better understanding of the Holocaust.

“This is something the center has wanted to do for a while,” Oldenburg said. “All 18 murals together are very impactful. They’re large murals, and you step into the Holocaust.”

Donna Parker, exhibits curator at the Kentucky Museum, said there’s more to the murals than their size.

“They’re very poignant pieces,” she said. “There are images and quotes from literature that leave a lasting impression.”

“The quotes made me realize the deeper things,” Hayden said. “There was one that really jumped out at me about standing by while evil things happen.”

The center approached the museum about hosting the exhibit in the spring, according to Bjorkman. Members of both organizations met at Bowling Green High School, where the murals had been stored by Ron Skillern, a social studies teacher there who also teaches the summer VAMPY class.

Bjorkman said the exhibit captured the museum’s interest right away.

“We want to bring more of what is going on at WKU here [to the museum],” Bjorkman said.

Parker said the exhibit highlights a collaboration of people on WKU’s campus and members of the Bowling Green community.

“It showcases the VAMPY program to the young community and region,” she said. “They get to see what’s being done through WKU.”

All the collaborators of the exhibit gathered at the Kentucky Museum Friday to celebrate the exhibit. Collaborators included the director of the Jewish Heritage Fund for Excellence, which funded the exhibit, said Bjorkman.

Former students who participated in the VAMPY program were also there to revisit their past work and the teacher who made it all happen.

“Never Forget: Nazi Germany and the Holocaust” will be traveling across Kentucky in the next year or so, said Oldenburg.