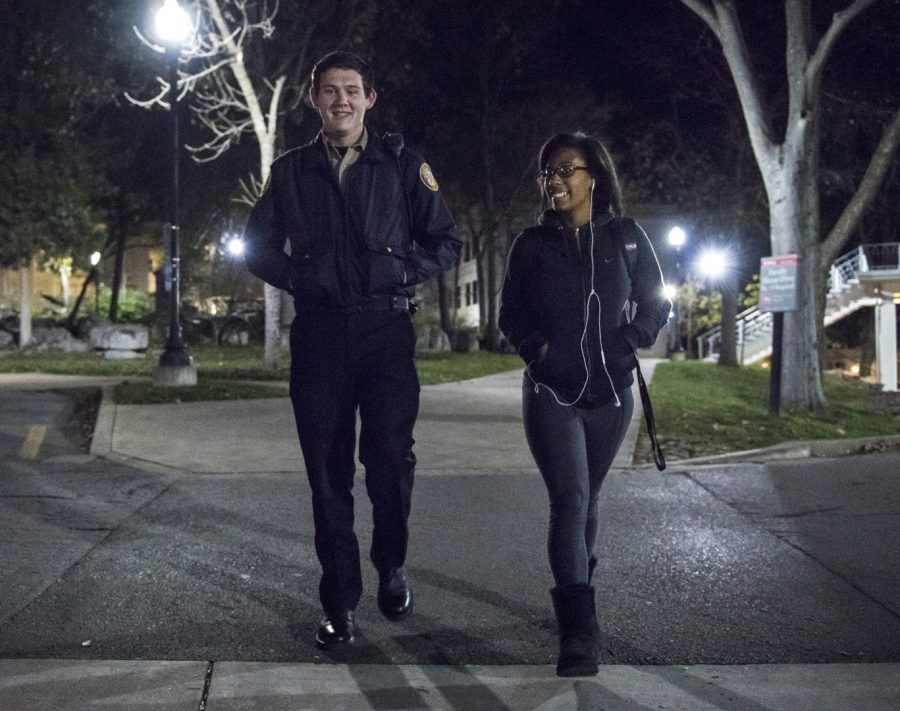 WKU Police Explorer Dylan Givens, a junior from Benton, escorts freshman Kayla White to her dorm Sunday night. The Explorers, who work with the campus police, patrol the campus at night while keeping an eye out for illegal activity, making sure residence hall doors stay properly locked and walking with students who desire an extra sense of security after dark.

Some students are gaining hands-on experience in law enforcement on campus.

The Explorers program, a division of the Boy Scouts of America, ranges from several different types of career based programs, such as police, EMT and firefighters. The police program is the only one available through WKU and has been on campus for about nine years.

The program is offered to students who have an interest in pursuing a career in law enforcement and wish to see firsthand what the job includes.

The Explorers program allows students to gain an advantage in the job market and receive training while also being a student, WKU campus police Capt. Dominic Ossello said.

“This is a great way for those students that may be interested in a career in law enforcement to see the inside of a job like this before they go to the actual police academy. They get to work with officers in the field and figure out if this is really something they’d like to do,” Ossello said.

The students who participate in this program provide escort services, go on ridealongs with campus police and have the opportunity to compete against other Explorer programs in the spring semester.

This competition, known as Winterfest, trains and tests the Explorers in scenarios such as active shooter drills and traffic stops. The competition is meant to help students gain experience in these before they advance to the police academy.

The WKU Explorers have placed in the top three in law enforcement events in previous years.

In addition to doing well in law enforcement drills, the WKU Explorers have also won the volleyball competition the past three years.

Physical training, classroom training and field trips to the Police Academy are also a part of the program.

“It gives the students more of an edge when going to interviews, since they have an inside understanding of what the job requires. This puts them ahead of others,” Walker said.

Many Explorers have gone on to pursue a career in law enforcement in places such as the Bowling Green Police Department, Kentucky State Police and Nashville Metro.

Ossello, who was an Explorer through the Bowling Green Police Department, said the program is worthwhile.

“The Explorers program has worked for years and years,” Ossello said. “It’s a really great program.”

Kentucky State Police officer Eric Chrisman, who was recently killed in the line of duty, is one notable alumnus of WKU’s Explorers program. Chrisman will be memorialized by the program through a badge that will be worn by all WKU campus police officers.