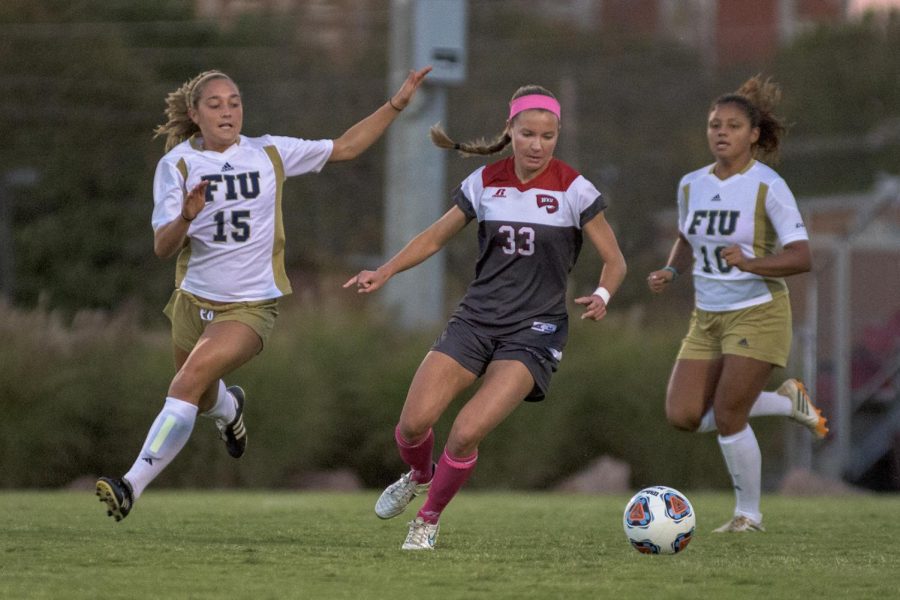 The Lady Toppers will host their penultimate match of the season against Marshall this weekend with hopes of making some last-minute jumps up the Conference USA rankings prior to postseason action.

Head Coach Jason Neidell’s squad picked up six points this weekend with victories over Florida International University, won 1-0 at home, and Charlotte, won 3-1 on the road, which moved the Lady Tops closer to clenching a spot in the C-USA tournament.

That said, seeding can pay huge dividends in postseason tournaments, and WKU will hope to move past Marshall in the standings this weekend with a win over it in Bowling Green.

Marshall (11-3-3, 4-2-2 C-USA) will be traveling to Kentucky from neighboring West Virginia this Friday fresh off a 1-0 victory over FIU — a result identical on paper to when the Lady Tops clashed with them last Friday.

Other than the Thundering Herd owning more nonconference wins on the season, WKU and Marshall appear to be very similar league opponents.

“We need to get another win,” Neidell said. “We did a great job last weekend, but we still need to secure our spot in the Conference USA tournament, and how we’re going to do that is through Marshall.”

On the season, Marshall has tallied 11 wins, and the team could tie its program record of 12 season wins from 2009 this weekend with a win over the Lady Tops in Bowling Green.

Two Herd players to watch out for in the upcoming match are senior midfielder and forward Kelly Culicerto and senior goalkeeper Lizzie Kish.

Culicerto netted her ninth career game-winning goal against FIU last weekend and will enter this weekend on a good run of form.

That ninth goal made Culicerto Marshall’s all-time leader in game-winning goals. The senior is ranked No. 2 in C-USA with 78 shots and is just two shots away from the Marshall record of 80 in a season.

Kish has proved herself to be a key player for Marshall as well with her seven shutouts this season adding to her career total of 19, a program record.

“We’re still trying to be really stingy defensively, and we’re looking at some stuff to help us create more chances on the attacking side,” said Neidell.

Recently there has been a trend of first career goals for WKU, including freshman defender Megan Morris’s, sophomore Andrea Larsen’s and junior Olivia Fitzgerald’s.

Morris recently scored a game-saving goal against UTEP that kept WKU from being shut out and brought the match to a draw at 1-1.

Larsen also proved herself when she scored the winning goal against FIU last Friday, saving her team from a draw.

Fitzgerald scored from the penalty spot for WKU’s second goal in its three-goal win over Charlotte.