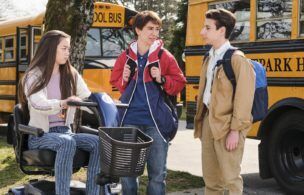 You may have seen Nasim Pedrad on shows like Saturday Night Live and New Girl, but now she’s stepping outside of the box for her latest role in TBS’s upcoming comedy Chad.

Starring as the titular character in this coming-of-age tale, Pedrad, who also created the series, brings to life an awkward 14-year-old Persian boy whose main goal is to achieve popularity in his freshman year. Below, Pedrad opens up about the personal experiences that inspired the project, and what it takes to transform into Chad, and more.

What should viewers know about Chad before diving in?

Nasim Pedrad: All he wants in life is to fit in and, in his mind, everything around him is conspiring against that. So he just has this rigid determination to become popular. A lot of the comedy comes from the fact that he’s willing to do it at all costs.

Chad’s pretty awkward and klutzy. Do you relate to that?

I was such a tomboy in every way. So, weirdly, Chad is not far from how I remember myself at that age. But obviously, as an adult woman playing a young child, I knew I needed to disappear into the character to really sell the conceit at the center of this show, which is an adult is playing the teenager in this coming-of-age story.

See AlsoKenan Thompson, Kate McKinnon & More ‘SNL’ Stars Branching Out on TV
From ‘Kenan’ and ‘The Dropout’ to ‘Girls5eva.’

I knew that the wig, eyebrows, posture, the binder that I wear under my shirts, and the little mannerisms I developed as I began creating the character and riffing as him would help me in the performance. We began with the external shell and then, from that, I went inward with figuring out, “What does he sound like? How does he think? How does he talk? What are his speech patterns? How articulate is he?”

A big part of Chad’s story is his family life. How important was it to also flesh out those characters?

It was critical in the sense that I needed to make sure the show was honest and authentic. More often than not, I was drawing from my own life, from specific things that I experienced in my childhood as a child of immigrant parents at that precarious age where you just desperately want to fit in. While you love your heritage and you love your parents, there’s also something really scary about feeling different, and there’s an inner conflict that I thought would be rich to explore that was very authentic to my experience growing up. There are such specific markers of childhood and adolescence that I think really accentuate that. For me, growing up with a name that people couldn’t pronounce was extremely alienating.  Something so simple and specific could end up just absolutely defining your identity at that age.

What else can viewers expect?

One thing the show does explore that you haven’t necessarily seen in other coming-of-age stories is that Chad’s not cool, but he’s also not being actively bullied. He’s his own worst enemy and he gets his ass handed to him in every single episode, but by his own doing. The popular kids aren’t bullying Chad, they’re generally very tolerant, nice, and accepting. They just don’t notice him, which to Chad is even worse, and so it sends him into a tailspin that gets him in trouble.