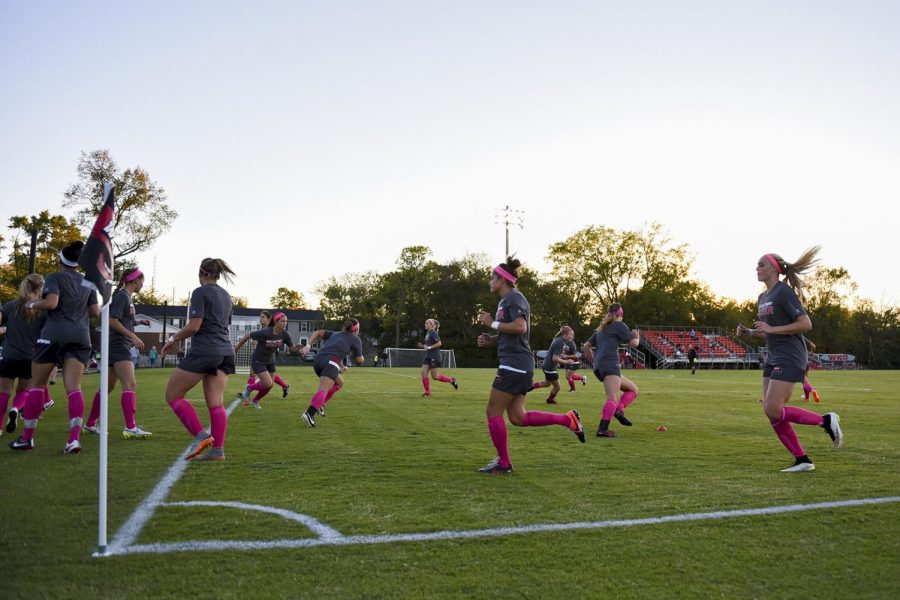 The Lady Toppers warm up before a 1-0 victory over conference rivals Florida International University on Friday at the WKU Soccer Complex. Western Kentucky won with a goal in sudden death overtime from Andrea Larsen (4), bringing their conference record to 3-2-2.

The Lady Toppers faced off against Florida International University and the Charlotte 49ers this weekend in two intense matches with two players, Andrea Larson and Olivia Fitzgerald, scoring their first career goals.

The match on Friday against FIU resulted in WKU’s sixth overtime of the season. The game resulted in a 1-0 victory for the Lady Toppers. The win improved the team to 7-4-4 on the season and 3-2-2 in Conference USA. FIU took the loss and dropped to 8-8-0 and 4-3-0 in C-USA.

WKU got ready to play against FIU who was tied for second place ranking in C-USA. The game went on for two halves, an overtime period and a majority of the second overtime before any goal action was seen.

The winning goal for the Lady Topper was made with one minute and fifty seconds left in the game by Larson, a sohpmore.

With only two minutes left in the second overtime WKU was awarded two corner kicks in a row. Cailtin Hesse attempted the final corner kick, but an FIU defender blocked the kick.

Larsen then got the chance to propel the ball in after an assist by Chandler Clark. This is not only Larsen’s first goal of the season, it is her first career goal.

“I’m feeling very excited,” said Larsen. “I feel very good. This was a really big win for us. Jason [Neidell] kept telling us this is the championship atmosphere that we’re in today and it was just a huge three points for us.”

The game ended with 16 shots by WKU with seven on goal. Hesse led the team in shots with five of her own, while Iris Dunn, Kelsey Moats, and Clark contributed two each.

FIU obtained only eight shots with two on goal. Keeper Allison Leone notched two saves, earning her fifth shutout of the season and 12th of her career. This record ranks Leone, only a sophomore, third all-time in shutouts in program history.

This vital win added three points to the Lady Toppers’ conference rankings and made their total 11.

“This was a crucial win. We needed three points tonight and the clocks ticking down in the second overtime and we needed better than a tie – We need a win,” said Head Coach Jason Neidell. “At the end of the season we might look back at this last minute and a half and see that scoring that goal saved our season.”

On Sunday the WKU took a road trip to Charlotte, North Carolina to take on the 49ers. The match resulted in another win for the team with a score of 3-1.

The victory added another three points for conference rankings putting WKU at 14 points. This is also the team’s fourth conference win of the season improving them to 8-4-4 on the season and 4-2-2 in conference.

“I think that we’re really putting pieces together and that we’re peaking at the right time,” said Larson

Hannah Cady, WKU forward, shot the first goal in the 37th minute. Cady was assisted by a play between Clark and Hesse that was reflected to her by the 49ers’ keeper.

WKU was awarded a corner kick just over a minute later and Fitzgerald secured the second goal after she made a clever play. This was Fitzgerald’s first goal of the season as well as her first career goal.

Later on in the 59th minute, Moats found herself in possession of the ball after a pass from Hesse. Moats fired the ball into the net for the third goal and her first of the season.

Charlotte was not going to let WKU go home with a shut out though. The 493ers were awarded a corner kick and Katie O’Neill shot the single point for her team.

After a winning weekend the Lady Toppers are currently ranked seventh in the conference standings. The top eight teams in the conference will be able to compete in the C-USA Championships held in Miami, Florida in November.

WKU will next take on Marshall at home at the WKU Soccer Complex for their second-to-last regular season game.