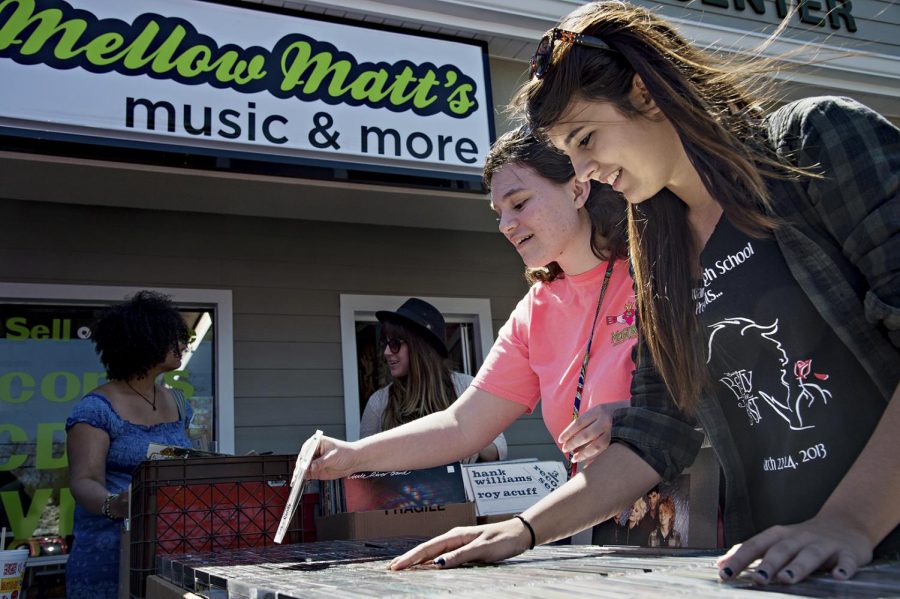 Alex Kary, front, and Carrie Mahagan, back, both of Bowling Green, sort through boxes of CDs and records during record store day at Mellow Matt's.

The local shop, Mellow Matt’s Music and More, has been nestled on Smallhouse Road since its opening in October of 2013.

Aubrey Penn, a senior from Frankfort, enjoys going to Mellow Matt’s for the store’s unique merchandise.

“I love it,” Penn said. “I’ve bought quite a lot of music from here and some other stuff: music, a tapestry and movies. It’s also great to support local business.”

WKU students are not the only people who enjoy the record store. Rachel Feldman of Bowling Green has been working at the store as a cashier since the store opened.

“I love working here; it’s the coolest job,” Feldman said. “Music is a passion of mine, and I get to work with it. I even get a huge library to pick from.”

Matthew Pfefferkorn, owner and founder of Mellow Matt’s, sees his job as a way to influence the Bowling Green community in a positive way.

“I opened this store because Bowling Green didn’t have … a local music store,” he said.

Pfefferkorn enjoys owning a record store in a college town. The young demographic is constantly coming and going, which brings new faces into his store.

“It [is] amazing to see how many people want to buy records,” Pfefferkorn added.

In today’s world of music, almost every song can be found online, but Pfefferkorn said he likes this access because it allows people to discover new music faster. If someone really enjoys an album online, Pfefferkorn believes he or she will come to his store to buy a hard copy of the work.

Tayler Dick, a senior from Somerset, enjoys going to Mellow Matt’s because he enjoys the store’s “vibe.”

“They have a really big mix of different artists,” Dick said. “I think [it] is really cool, and I actually got a puzzle from here.”

To expose the community to a wider range of music, Mellow Matt’s hosts many events at the shop and other locations.

The shop often hosts an event called “Vinyl Take-Over” at Lost River Pizza Co. Participants can bring their favorite records to be “added to the spin” of music for the night.

Last month’s theme was “debut albums,” and this month’s theme has yet to be announced. Pfefferkorn encourages the community to “come join in the fun and bring your records.”