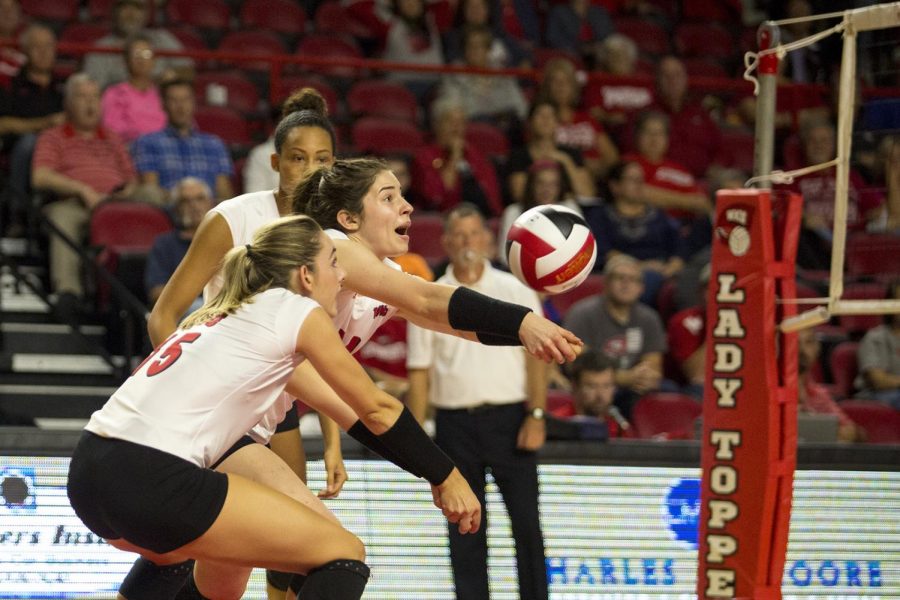 Sophomore outside hitter Jackie Scott (24) and senior outside hitter Rachel Engle (15) go for the ball during WKU’s 3-0 win against Louisiana Tech on Friday. Scott and Engle recorded three and five kills respectively in the Lady Toppers’ win over the Lady Techsters. Shaban Athuman/HERALD

The Lady Topper volleyball team is riding an 11-game winning streak heading into what could be the toughest match of the season and almost certainly of their conference schedule.

On Friday night, WKU will welcome to Diddle Arena the only other undefeated team in the Conference USA: the University of Texas at San Antonio.

The University of Texas San Antonio is a name that leaves a bitter taste in the mouths of the Lady Tops after it marked WKU’s only loss in conference play last season.

“Friday night is a matchup of the two unbeatens, and they are the only team we haven’t beaten yet in C-USA,” Head Coach Travis Hudson said. “They are a terrific team that we didn’t have an answer for a year ago, so we hope we can get that to change.”

With a 3-0 record against Power Five schools and an unblemished conference record, the Lady Toppers (17-2) re-entered the American Volleyball Coaches Association Top 25 for the second time this season with a No. 23 national ranking.

The match will present a showdown of two superstars at the net. WKU sophomore outside hitter Alyssa Cavanaugh and UTSA junior outside hitter Dajana Boskovic are two of the offensive leaders in the conference and will look to showcase their skills to lead their respective teams to victory.

“They have a right side hitter, Dajana Boskovic, who I think is the best player in Conference USA,” Hudson said. “She is a kid we had no answer for a year ago, and we will have to play against her really, really well.”

Cavanaugh proved to be a similar type of player for the Lady Toppers all last season in her freshman campaign.

“That’s gonna be a great matchup. I think they will be matched up at the net. You know one is a right-side hitter and the other a left, so they’re going to be staring at each other through the net,” Hudson said. “I think the winner of that [individual] matchup certainly has to feel like they have a good chance to win this match.”

Hudson followed up with the assurance that those two student athletes aren’t the only reason to attend the match.

“There is a lot of really good players taking the floor on Friday night. If you want to see real high level volleyball, it’ll be going on in Diddle Arena,” Hudson said. “These are the two teams that shared the championship a year ago that both returned for the most part intact.”

The stat line a year ago in the match against UTSA showed two almost identical statistical performances. They were even on digs and aces and very comparable in hitting percentage.

“It was just dead even. It was a dog fight of a match, and I anticipate Friday being very similar,” Hudson said.

Look for the Lady Toppers to continue their hunt for another championship on Friday at 7 p.m. in Diddle Arena.