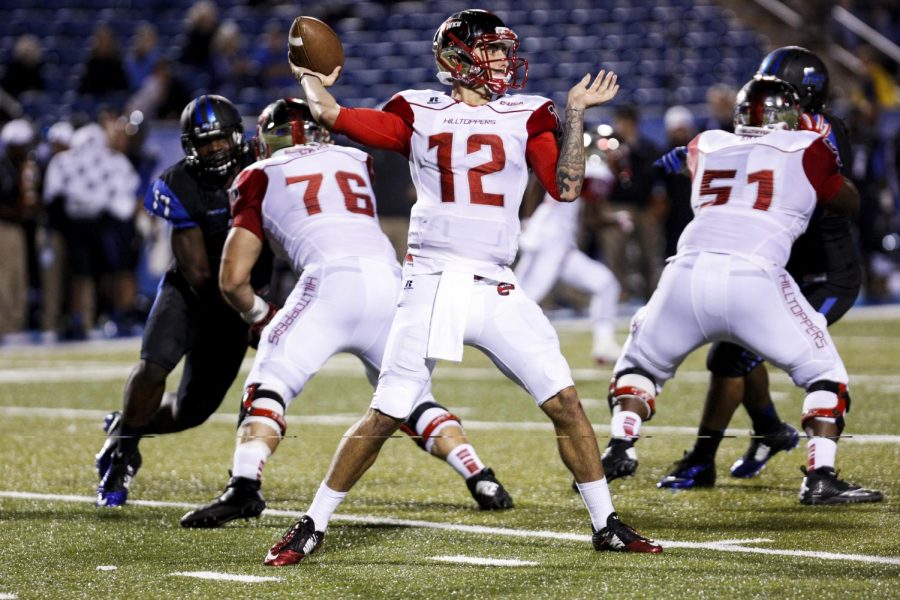 The most historic rivalry game in Conference USA will be played this weekend.

The ‘100 Miles of Hate,’ the annual football game between WKU and Middle Tennessee State University, will be played at Smith Stadium on Saturday at 11a.m.

In addition to being on the losing end of that record, the Hilltoppers have not defeated MTSU in Bowling Green for almost 26 years.

“I know we haven’t won at home since 1989 against Middle Tennessee, so this is an important game for us,” Head Coach Jeff Brohm said. “They’re on our side of the division, and we have to find a way to win, but it’s going to be a tough physical battle. We’re looking forward to Saturday morning.”

Adding to the frustration of not beating the Blue Raiders at home since 1989, three of the last four games in Bowling Green have been decided by five points or less.

The most recent matchup between the two schools came last season in Murfreesboro, Tennessee, where the Hilltoppers were bested in a 50-47 overtime thriller that saw Brandon Doughty throw for just shy of 600 yards with four touchdowns and three different WKU receivers with over 100-yards receiving.

This year, even more is on the line.

WKU will be looking to move to 3-0 in conference play for the first time since joining the Football Bowl Subdivision in 2005.

“I’m just excited. I can’t wait,” redshirt senior cornerback Prince Charles Iworah said. “I love the thrill. I love the rivalry. I love the 100 Miles of Hate. I love all of it. I’m just truly, truly excited and can’t wait to play this game.”

Much of their success comes from freshman quarterback Brent Stockstill. He currently leads all first-year players nationally in passing yards (1507) and has thrown 13 passing touchdowns and only two interceptions this season.

Other players to watch include senior running back Jordan Parker, who has six rushing touchdowns, and redshirt senior receiver Ed Batties, who leads the team with 528 receiving yards and eight touchdowns.

“This is a very important game for our team because it’s such a tough divisional match up, and luckily we get them at home,” Brohm said. “We’re looking forward to getting our crowd out there and them helping propel us to a victory.”

Kickoff at Smith Stadium will be at 11 a.m. The game will also be broadcast on Fox Sports Network.

The last home game for the Hilltoppers, a 56-14 win against Miami (Ohio), saw an attendance of 20,320: the most for a Hilltoppers game under Brohm and the most since the 2013 home opener against Morgan State.

The Hilltopper players expressed this week that they need the fans to show up.

“Like Prince said, we know 11 a.m. is early, but we need everyone there,” redshirt junior Forrest Lamp said. “We need the student section to be screaming. We need the whole berm to be packed. It’s really hard when it’s not a good atmosphere, so shout out to all our fans and come pack the [stadium] at 11 a.m.”