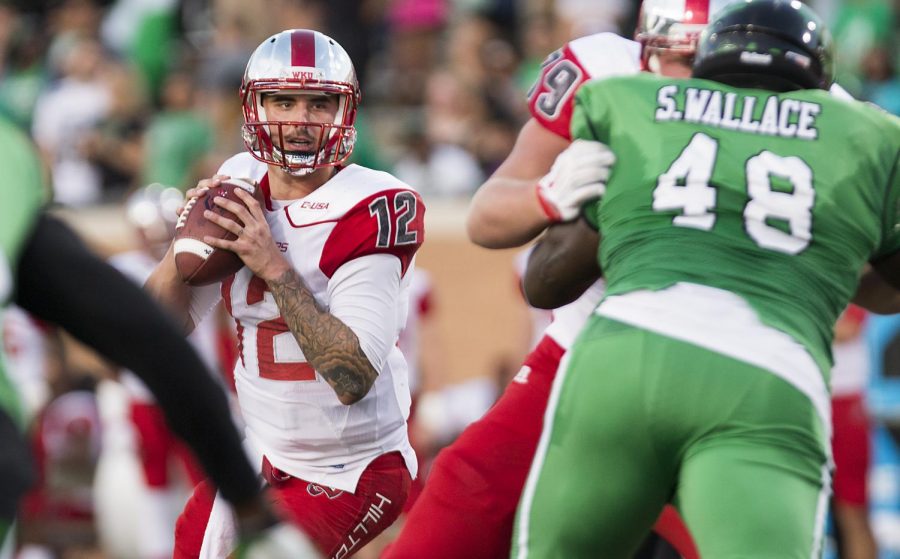 WKU quarterback Brandon Doughty (12) looks for an open receiver after the snap during the game against North North Texas at Apogee Stadium, Oct. 15. Doughty finished the game with 350 passing yards with four touchdowns and one interception. Colin Mitchell/North Texas Daily

Favored by 33 points, the Hilltoppers ended up with the win after defeating the Mean Green in Denton, Texas 55-28.

With the victory, the Hilltoppers (6-1, 4-0) became the first bowl eligible team in the state of Kentucky and become bowl eligible for the fifth consecutive season.

The Hilltoppers were led by redshirt junior running back Anthony “Ace” Wales. He totaled 256 total yards of offense including three total touchdowns (two rushing, one receiving). Wales’ performance came after earning 111 rushing yards against rival MTSU—his first breakout performance since a hamstring injury limited him early in the season.

Senior quarterback Brandon Doughty continued his impressive season. He threw all four of his touchdowns in the first half and finished with 350 yards despite only playing into the third quarter. Doughty threw his touchdowns to three different receivers including Wales, senior receiver Jared Dangerfield and two to Taywan Taylor.

The win was the seventh straight Conference USA win for the Hilltoppers, the program’s longest streak since winning nine straight against Sun Belt opponents in 2011 and 2012. The Hilltoppers have now won four games against C-USA opponents this season, racking up wins against Louisiana Tech, Rice, Middle Tennessee and now North Texas.

The Hilltopper offense continued to dominate the first half. WKU went into halftime leading 34-14 despite some missed opportunities. WKU has scored totals of 49, 35 and 52 in its last three games.

Senior kicker Garrett Schwettman was able to put points on the board when the high-powered offense couldn’t. The all-time leading scorer in program history went 2-2 on field goal attempts of 25 and 43 yards while also making seven extra points.

While the offense did their job, the WKU defense continued to improve. After giving up point totals of 14, 10 and 28 in its last three games, they only gave up 28 points in Denton. They only forced one turnover, but going into the game the team lead the nation in turnover margin with 12.

WKU’s next game will be Saturday, October 24th against SEC opponent Louisiana State. WKU is 1-1 this season against Power 5 conference opponents.