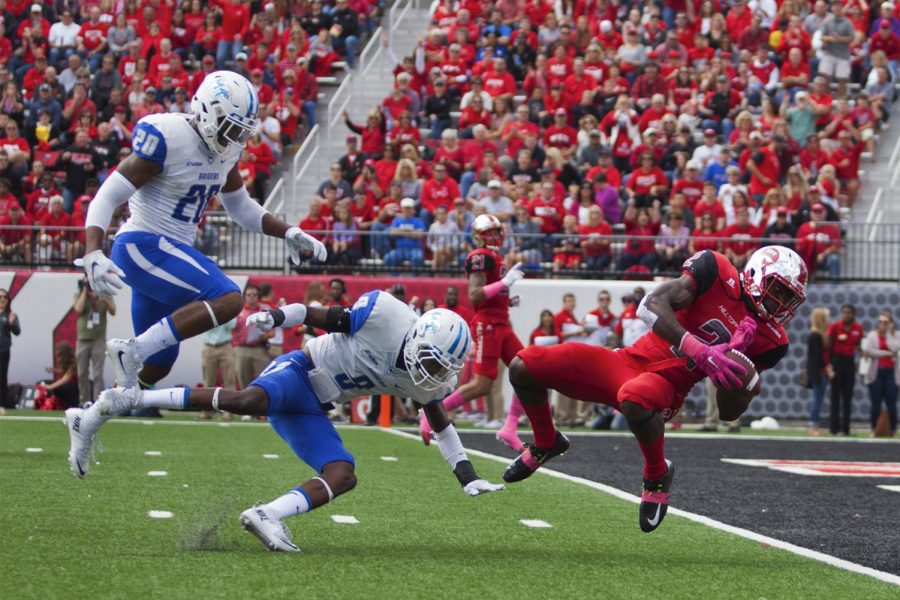 Not only did the Hilltoppers (5-1, 3-0) receive more votes—five—than they have ever received before in the Associated Press Top 25 poll, but they will also aim to clench bowl eligibility for the fifth consecutive season and for the fifth of seven years in the Football Bowl Subdivision era.

“Our team has to understand that in college football, there’s a lot of parity,” Head Coach Jeff Brohm said. “Each and every week, you have to show up ready to play.”

Brohm stressed the need to get off to a quick start like the Hilltoppers did against Middle Tennessee.

“We definitely have to find a way to be ready to go from the get-go, play hard and continue to get better,” Brohm said. “That’s what we try to do as a team is to take it as a one-game season, find a way to improve and win the football game.”

A 6-1 start would be the Hilltoppers’ best start of the FBS era.

After suffering its only defeat of the season on Sept. 19 against Indiana, WKU has won its last three games by scoring a combined 163 points in games against Miami of Ohio and conference opponents Rice and Middle Tennessee.

Currently, the Hilltoppers have won six straight games against conference opponents. This is the program’s longest streak since it won nine straight against Sun Belt opponents across 2011 and 2012.

With the game on a short week, North Texas fired Dan McCarney, its head coach of four years, after it lost to Portland State 66-7 this past Saturday.

Offensive coordinator Mike Canales has been named the interim head coach for the remainder of the season. This is his second stint as interim head coach; he coached the final five games in 2010 and notched a 2-3 record.

Even though North Texas is going through struggles, the Hilltoppers are quick not to underestimate the team.

Newton stressed that there is always room to get better.

“There was areas for improvement that we can go back and work on,” Newton said.

The Hilltoppers will see a familiar face in Denton, Texas, from junior quarterback DaMarcus Smith, who spent two seasons at WKU in 2012 and 2013. He will make the start for North Texas.

Smith played five games in 2013 for the Hilltoppers, and through three games at North Texas, Smith is 6 for 18 for 105 yards and one touchdown.

Smith will face a Hilltopper defense that is showing improvement. WKU has given up point totals of 14, 10 and 28 in its last three games, and the team currently leads the nation in turnover margin at plus-12 this season.

After a big win last week over rival Middle Tennessee, the Hilltoppers know what they have to do to succeed.

“After a good win, I want our guys to feel good about themselves,” Brohm said. “They played well. They played hard. They prepared well. The thing we have to realize is that after 24 hours, it’s time to move on.”

It goes back to what Brohm said at Media Day before the season began: The Tops need to take the season one game at a time.

“The reason we played well was because we did these things,” Brohm said, “We worked extremely hard, we prepared, we focused on the small things, we found a way to get better, and I think our guys have a good understanding about that.”