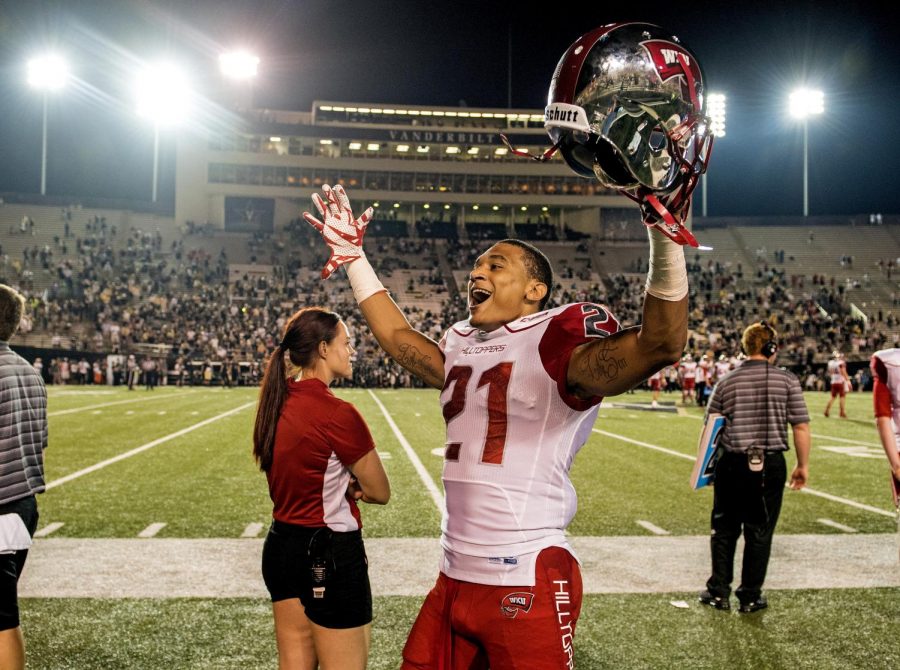 Senior wide receiver Jared Dangerfield is getting back to the form he saw last year in his first season on the Hill.

After nursing a hamstring injury through the first few games of the season, Dangerfield seems to finally be back in the shape that saw him break the singe-season reception record (69) and tie the school record in touchdown receptions (11) in his first season as a Hilltopper.

“Mentally, I think he’s back where he needs to be,” offensive coordinator Tyson Helton said. “He’s feeling really good now, hitting on all cylinders. Even Brandon (Doughty) said the other day ‘Dangerfield’s back’ so I’m fired up for him and he’s ready to roll.”

Dangerfield’s injury played a major role in the first few games of the 2015 season.

In the season opener at Vanderbilt, Dangerfield was held catch-less for the first time as a Hilltopper. He started to gain some confidence back after a four catch, 44-yard outing against Conference USA foe Louisiana Tech, but the 6-3, 215 pound senior was still not himself.

“He works hard man and he is going to play through any type of pain, so whether he is 100% or not I really couldn’t tell you because he wouldn’t tell me,” wide receiver coach JaMarcus Shephard said. “This year, Jared has taken on quite a bit more of a leadership role with these guys, encouraging them to put forth their best effort everyday. He’s put these guys ahead of his own personal goals and that’s a big testament to the kind of person he is.”

After a six catch, 59-yard outing against Indiana and being held scoreless for a third-consecutive game, Dangerfield finally returned to form, tallying new single-game career highs in receiving yards (148) and receptions (11) against Miami (Ohio) while also adding his first TD of the season.

It was a breakout game for the number one receiver; and after posting a team-high eight catches, 95 yards and a touchdown in the Hilltoppers’ last game at Rice, Dangerfield is confident in his ability to play at a high level once again.

“We are hungry this year,” Dangerfield said. “Our group of receivers is pretty deep and we all come in and contribute, all of us have individual skills to bring to the table. We’ve been clicking on all cylinders.”

Dangerfield noted the change in mentality from last year, where the receiving core contributed to one of the best passing offenses of 2014.

“No disrespect to the group we had last year, but this year I feel we are more experienced, we have a different hunger to this core,” he said.

Dangerfield has worked hard to get to the premiere role he finds himself in today.

Before WKU, he played nine games for Fort Scott Community College where he caught 43 passes for 690 yards and eight touchdowns. It was there where he was rated as the No. 15 JUCO wide receiver and a three-star recruit that caught the attention of the Hilltopper coaching staff.

Now in a place of success, and a possible future awaiting him in professional football, Dangerfield wants people to know what his true intentions are.

“I want fans to know I’m a hard worker and that I’ve done everything I can to make this program, the team and myself successful,” Dangerfield said.