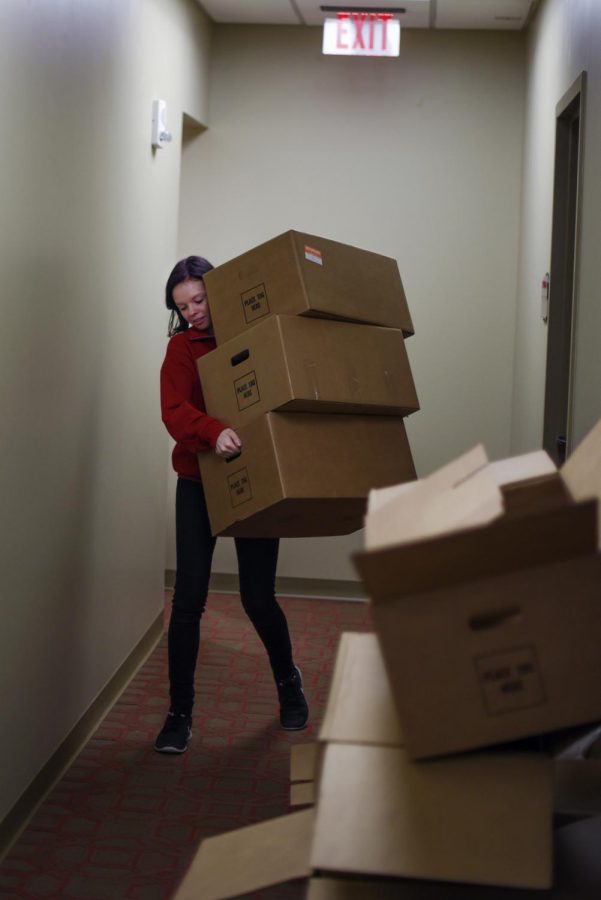 Senior student assistant Tara Sorrels moves and organizes boxes in a newly opened office at the Honors College and International Center building Wednesday. ''The building really adds to everything we try to do in the Honors College," Sorrels said. "It will be great for families to see when they visit and for students and international students to be able to use side by side.'' Gabriel Scarlett/HERALD.

The Honors College and International Center recently welcomed 10 departments and offices that will call the building home.

The Office of Scholar Development, Chinese Flagship and the Study Abroad office are among the groups making their way into the new building.

Chief facilities officer Bryan Russell said the building is not 100 percent finished, but they are putting on the facility’s finishing touches.

Russell said the building’s interior is “absolutely gorgeous” and will serve as an excellent teaching environment. He said they have helped people move out of trailers into the new building, which he believes will provide a sense of place.

“It just gives everyone a sense of belonging,” Russell said.

Sara Moody, program coordinator for Chinese Flagship, said the transition to the new building went well and was a smooth process.

She said the Chinese Flagship offices are located close to where classes in the program will be taught — a convenient layout.

Craig Cobane, the executive director of the Honors College, said he moved in last Tuesday. Cobane expressed excitement about having everything international under one roof.

“We have opportunities to do things we have never done before,” Cobane said.

Having all international offices under one roof also facilitated communication, according to WKU alumna Shelley Spalding, new office associate for the Office of Scholar Development and Chinese Flagship.

Being spread out across campus strained the offices’ communication with each another, and Spalding believes the new building helps fix this problem.

“The new building is long-awaited,” she said.

Cheryl Kirby-Stokes, the coordinator for nationally competitive opportunities in the Office of Scholar Development, has already seen the impact the building will have on students.

“My very, very first day, I could see instantly the benefit to the student body,” Kirby-Stokes said

She reflected on how two students approached the office for study abroad scholarships and praised the new building’s layout for directing students.

“I was able to walk them downstairs … they don’t have to go to the double-wide trailer at the top of the hill,” she said.

Prior to its new second-floor location in the Honors College and International Center, the Office of Scholar Development was located at the top of the hill in a trailer across from Cherry Hall and next to the Honors College building. The Study Abroad office was formerly located on the first floor of Grise Hall.

“I feel very lucky, and I don’t take this space for granted,” Kirby-Stokes said.

A previous version of this story referred to a student as “Shelby Spalding” this has been corrected to say “Shelley Spalding.” The Herald regrets the error.