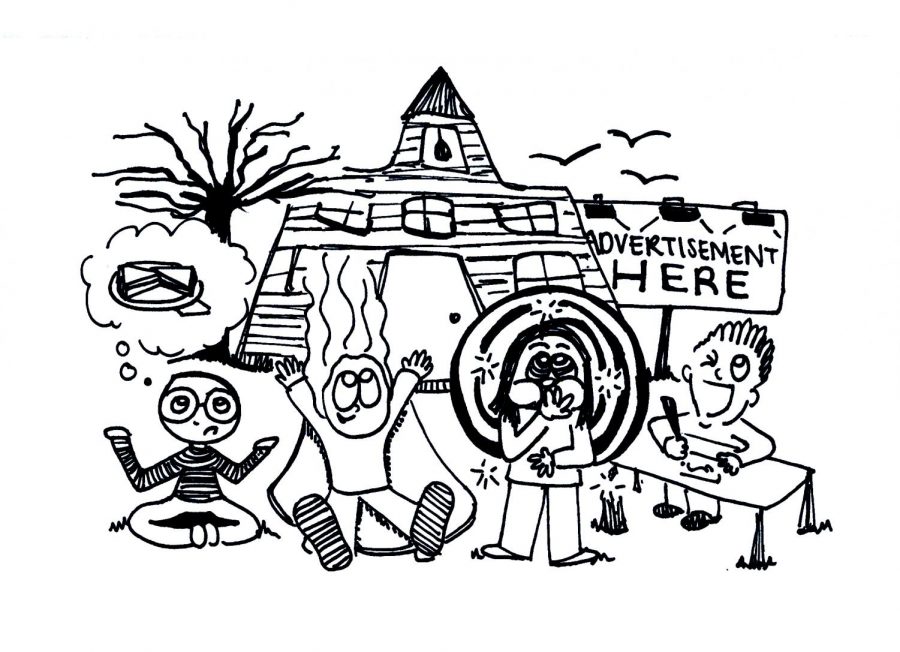 On Friday, Oct. 23, five of the Herald’s editors ventured through the backroads of Allen County to take on Skeleton’s Lair, an outdoor and supposedly haunted scream park. At best, the park’s components were well thought out. At worst, the night’s scariest moment was almost stepping on a garter snake as we walked down the trail.

After driving 30 minutes down winding country roads and almost crashing into two drivers who decided to stop in the middle of the street, we arrived at the park.

The path leading up to the attraction was lit by an assortment of dangling white lights that were enchanting and entirely out of place. This would not be the last time elements of the park didn’t match the “haunted” theme.

After purchasing $22 tickets and documenting the adventure with a group photo or two, we walked towards the first attraction of the night.

We were startled for the first and last time when a werewolf shrouded by shadows whipped a metal chain against a tree.

It honestly went downhill from there. The first haunted house made me feel more intoxicated than scared. I don’t know if it was the 3-D glasses or the spinning vortex tunnel, but I kind of wanted to hurl when I was finally free from that place.

I had time to settle my stomach during the 35-minute wait between the first and second attractions. The long wait made everyone a little spacey; at one point, Mollie Moore was staring off into the distance for so long we had to ask what she was thinking about.

The second attraction consisted of a series of haunted houses, wax figures, bad acting and — much to our enjoyment — slides.

It’s funny how most of the people on the “haunted” trail were smiling and laughing simply because they got to ride down slides.

As we neared the end of the trail, we stumbled across an actor who told us, “You’re all going to die.” This was prior to an “X-Files” exhibit, and Andrew Henderson, an avid follower of the show, retaliated with “I can die happy now because I have found the truth!”

The rest of the night consisted of a hayride complete with fake cannibals, men on stilts and another out-of-place display: a giant billboard advertisement. I guess corporate America can be the stuff of nightmares.

Despite being let down at every attraction, we still anticipated a fright from special guest Tom Morga, who stunted for the characters Michael Myers in “Halloween 4,” Jason in “Friday the 13th Part 5” and Leatherface in “Texas Chainsaw Massacre 2.”

At the end of the night, we finally came face-to-face with Morga during the last element of the park. As we left the haunted hayride and proceeded down a dimly lit path, we saw Morga blocking the exit.

Yet he wasn’t wearing a hockey mask or wielding a chainsaw, and there was no chef’s knife in sight. Instead Morga sat, pen in hand, signing autographs and selling merchandise.

It seemed like a complete waste not to utilize a professional scarer in a scream park. Autographs are nice, but having Morga chase me through a field would have been a bit more memorable.

Until next year, Skeleton’s Lair — but probably not.