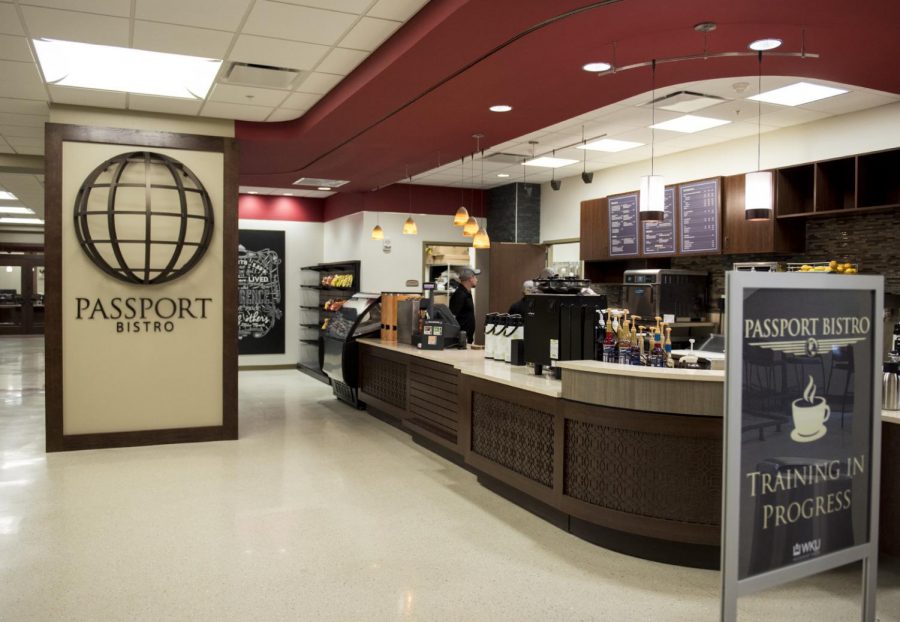 The Passport Bistro, one of the newest campus restaurants, is open for business inside the new Honors College and International Center. The menu features international food and drinks that are all-natural and eco-friendly. They are currently only serving drinks but are expected to be offering the full food menu in the upcoming weeks. Matt Lunsford/HERALD.

With the Honors College and International Center constructed and dedicated, one facet of completion remains.

“We’re excited about offering a new venue for the students,” said Hoyng. “We’re still working to make sure the equipment works to get people working.”

“We wanted to do something different from the other places around campus,” said Hoyng.

The international menu will contain some locally sourced ingredients like spices from Bowling Green’s international markets. However, most of the main items will come from Dining Services’ typical providers.

“We tried to do a little bit of everything,” said Hoyng.

Breakfast options are quesadillas, pita, fruit and yogurt, among other options. They range in price from about $3 to $5.

Salads cost about $4 with a choice among caesar, garden and Mediterranean varieties.

Sandwiches dominate the lunch menu with panini, gyros, pita and other options. They cost from about $3.50 to $5.50.

For dessert, students can order baklava, cannoli, gelato or tiramisu. Prices vary from about $2 to $4.

Passport Bistro will have meal-swipe options available and will also accept cash and meal plan dollars.

Alexis Corbin, a junior from Lawrenceberg, has class in HCIC every day and is excited to have tea so close to her classes.

Although she doesn’t have meal plans, she still plans on dining at Passport Bistro.

Corbin hopes Passport Bistro will help students expand their tastes because she fears most students frequently eat the same meals. She wants students to be inspired to eat creatively at home.

“I hope it doesn’t get backed up,” she said.

Glasgow native and freshman Pate Shipley has class in HCIC twice a week. He said he wants to see the restaurant bring students together in the new building.

Because Dining Services doesn’t know how popular Passport Bistro will become, there are not official hours of operation. Hoyng expects the restaurant to open between 7:00 a.m. and 8:00 a.m. and to close around 4:00 p.m.

“Anything is a possibility,” said Hoyng. “We’re hoping it’s busy.”

The restaurant has added new jobs, but Hoyng does not know exactly how many more will be added.

“It will depend on how busy Passport Bistro becomes,” said Hoyng.