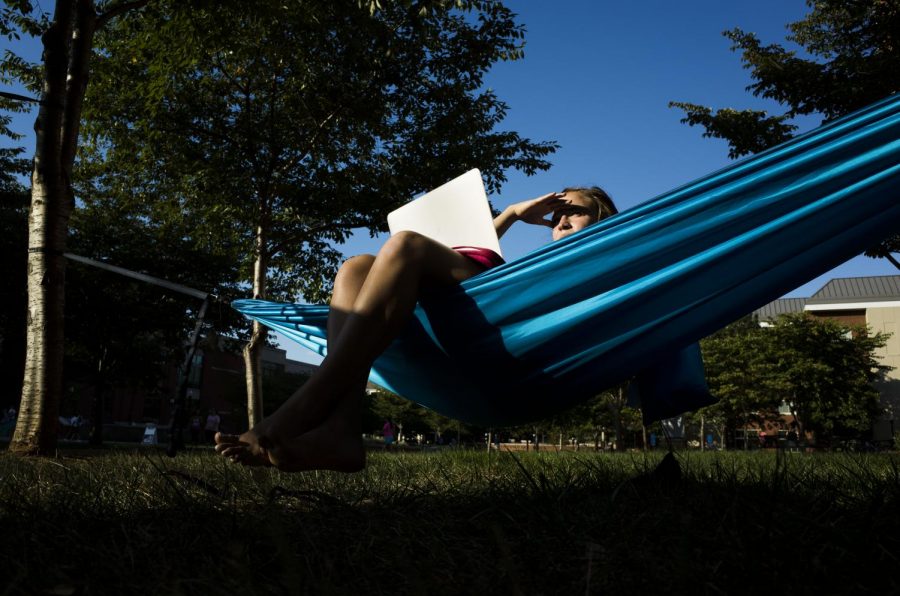 Bardstown sophomore Madlyn Beasley, a communications and Spanish major, enjoys the afternoon sun in her hammock outside of Minton Hall in August. Brittany Greeson/Special To The Herald

On a bright sunny day on WKU’s campus, one would not have to look far to find students relaxing leisurely in a hammock. However, while students are relaxing, the trees might be stressing.

Recently, many campuses across the U.S. have banned hammocks due to the damage they can inflict on trees.

Universities such as Michigan State University, the University of North Carolina, Chapel Hill and other colleges have banned the popular activity on their campuses.

According to an article called “Want to Hang Out? Some Colleges Say No to Hammocks” in the Wall Street Journal,  some colleges cite damage to trees as their primary reason for banning hammocks. Damage is caused by the repeated tying of ropes that erode the tree’s bark and expose sensitive layers underneath. Colleges who enacted the ban also cited safety hazards.

Leah Hopwood, campus arborist for WKU, said hammocks do not usually cause damage to trees unless the tree is too small or damaging straps are used.

“Of course, it depends on the size of the tree and what is being used to secure the hammock as well as how the hammock is being used,” Hopwood said. “A hammock should never be hung from a tree any smaller than 6-inch caliper.”

She added the nylon straps commonly used do not hurt the trees unless they are misused.

Hopwood said she does not believe hammocks will be banned here as long as people respect the trees.

“I do not think that will become an issue as long as [the hammocks] are properly used and the trees are respected,” she said.

Regarding trees that might be more at risk, Hopwood said some have thinner bark that could result in bark damage, but as long as the trees are the right size, there should not be any major problems.

She also said wider straps help prevent digging or damage to the bark and urged hammock-owners never to use anything that would puncture the tree.

Hopwood said students can prevent harm by making sure they use proper straps and avoiding trees that are too small to hang from.

“WKU students have shown their love for our beautiful campus and seem to appreciate the trees,” she said. “Ensuring that the tree is not too small and proper straps are being used will alleviate a lot of problems.”

Alex Knipp, a sophomore from Olive Hill, said everyone who hammocks tries to be kind to the environment.

“I don’t know of anyone who hammocks who isn’t trying to make sure they protect the space they’re in,” Knipp said. “It’s like some unspoken rule that you use good ties, and you pick up after yourself, and it’s all about being in nature so most people’s goal isn’t to hurt that nature.”

Knipp said she feels schools that have banned hammocks are cheating students of opportunities to relax.

“I think that they’re depriving them of a good stress reliever,” she said. “It’s just a really effective way to destress and reconnect to nature and to take a place to meditate and relax, and I feel like those students are going to be deprived of that.”

Knipp added that stress relief is important for many reasons.

“I think that stress relief goes a long way in helping you stay on top of schoolwork and be productive, so I feel really bad for them, and I hope their school doesn’t see a struggle with students coping with stress,” she said.

Knipp said everyone is trying to ensure hammocking spaces can be used for years to come.

“Most people are very proactive in making sure that the space they’re in is preserved so we can keep enjoying it,” she said.