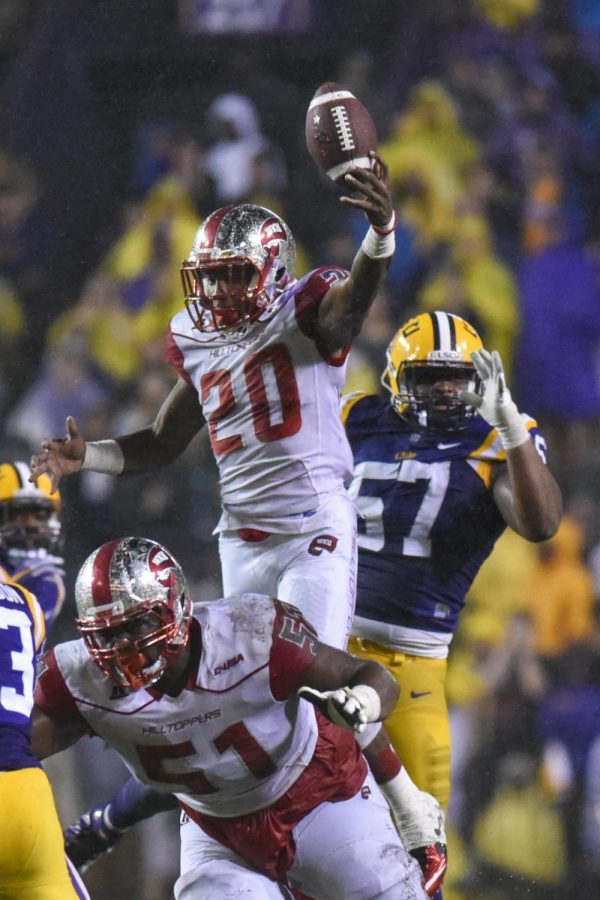 WKU's running back Anthony Wales, 20, makes a catch during the Hilltopper's 48-20 loss to LSU on Saturday at Tiger Stadium in Baton Rouge, La.

The high powered offense of the WKU football team was on full display Saturday against Old Dominion University, but it wasn’t the passing attack that led the way.

Redshirt junior running back Anthony (Ace) Wales put forth his strongest display of the season thus far, managing 185 yards and a career-high four touchdowns to lead WKU past Old Dominion 55-30.

The Hilltoppers (7-2, 5-0) have continued their unbeaten C-USA play and have now started 5-0 in conference for the first time since 2000.

Senior linebacker Nick Holt proved vital once again for the Hilltopper defense. He recorded a career-high three sacks, a forced fumble and a fumble recovery to go along with 12 tackles. While the defense did give up 30 points, Holt was a bright spot and a playmaker throughout the game.

With the game tied at 3-3, the Hilltoppers offense kicked into gear. Their next possession ended in the first touchdown of the game, a 1-yard TD rush by redshirt junior Anthony (Ace) Wales near the end of the 1st quarter.

After a defensive stop, Wales found the end zone once again, this time a 44-yard touchdown rush to put WKU up 17-3 with 11:52 left in the second quarter. The Monarchs responded on the following drive with their only touchdown of the first half, a 3-yard TD pass from Shuler Bently to Jonathan Duhart.

The Hilltopper offense refused to lay down, scoring two more touchdowns before halftime. A pair of passing TD’s by sixth-year quarterback Brandon Doughty to Nicholas Norris, a 54-yard reception, and Jared Dangerfield on a 3-yard TD pass.

WKU went into halftime leading 31-10 and continued to roll after the break. After a touchdown by the Monarchs made the score 31-17 to start the third quarter, WKU kicked another field goal, a 31-yard score from Schwettman, and another Dangerfield touchdown, this time a 21-yard grab.

ODU continued to find success in the air. Bentley found two more scores, one through the air the other on the ground. But Wales sealed the game for the Hilltoppers, scoring twice in the final quarter on 19 and 47 yard touchdown runs.

The Hilltoppers next game will be WKU homecoming on November 7th against Florida Atlantic.