History Of… Greek organizations being recognized on the Hill 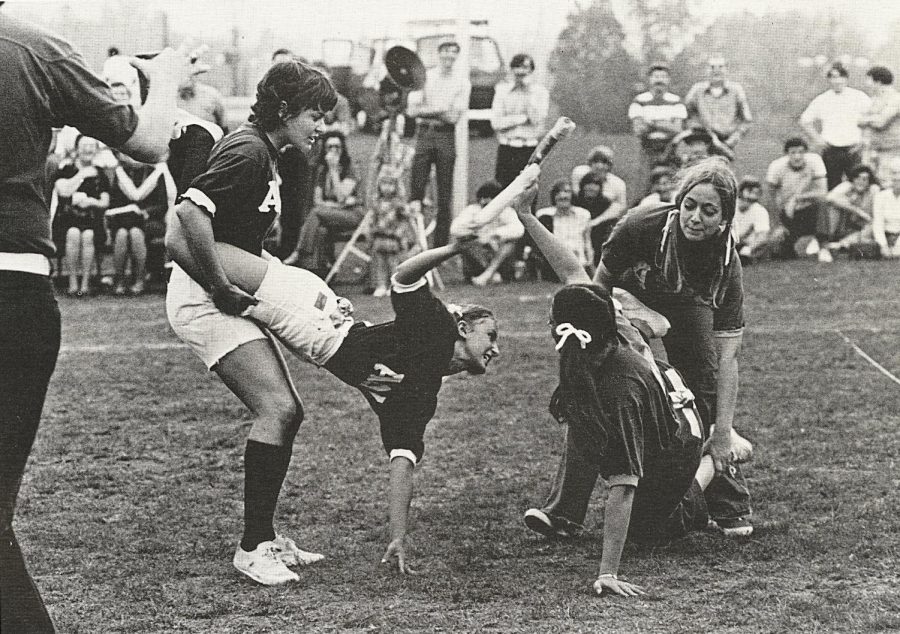 Penny Walker and Stacy Foster fight off the Alpha Zeta Deltas in the egg smash event at the Sigma Chi Derby. Walker and Foster won the contest. Photo circa 1972/Talisman Archive

Over the next several weeks, on #TBT (Throwback Thursday), the Herald will take a look at the history surrounding WKU.

More than 50 years ago, WKU began to recognize fraternities and sororities as organizations on campus. Since then, Greek chapters have permeated the Hill and continue to be a prominent part of campus life.

Greek life on the Hill began in 1965, when the Board of Regents started working with local fraternities and sororities to make them nationally recognized organizations. These chapters strived to provide abundant opportunities for students to become involved in the community, according to Director of Student Activities and Organizations Charley Pride.

Coordinator of Greek Affairs Alexandra Kennedy said the original intent of fraternity and sorority chapters was to provide an outlet for students to discuss the issues of the day. That is why Greek chapters are considered social organizations.

“We originally served as the only place students could have intellectual conversations about society because college academics did not focus on those areas outside of math and sciences,” Kennedy explained.

These organizations aim to offer students a sense of belonging and a place of involvement outside of the classroom.

“I can tell you this much: I joined a sorority because I wanted to be part of something bigger than myself, something that would challenge me and help me make friends along the way,” Kennedy said.

According to Scott Taylor, assistant to the vice president of Student Affairs, many campus leaders are alumni of Greek organizations. These include President Gary Ransdell, who is a Sigma Alpha Epsilon alumnus.

Some of the chapters founded in 1965 are still organizations at WKU while others, such as Delta Tau Delta, left campus because of declining chapter operations.

Taylor said chapters leave when they deviate from their purposes.

“They violate policy, or their numbers get so low that they cannot sustain themselves,” he said. “Right now, things are looking pretty good.”

Pride believes that despite the chapters who have left, the current chapters are becoming better and larger in size, and this trend will continue in the upcoming years.

“You hear the talk of cost, apathy of members, neighbor relations and classism,” Pride said. “There is more liability placed on being in Greek organizations than in the ‘60s through ‘80s.”

There are currently over 2,400 students involved in Greek life at WKU, and they comprise roughly 20 percent of the Bowling Green campus’ full-time student population, according to Pride.

“Even though our traditional student enrollment has remained fairly constant, the percentage of Greeks right now in that target population is probably larger than it’s ever been,” Taylor said. “The Greek system is really very healthy right now.”