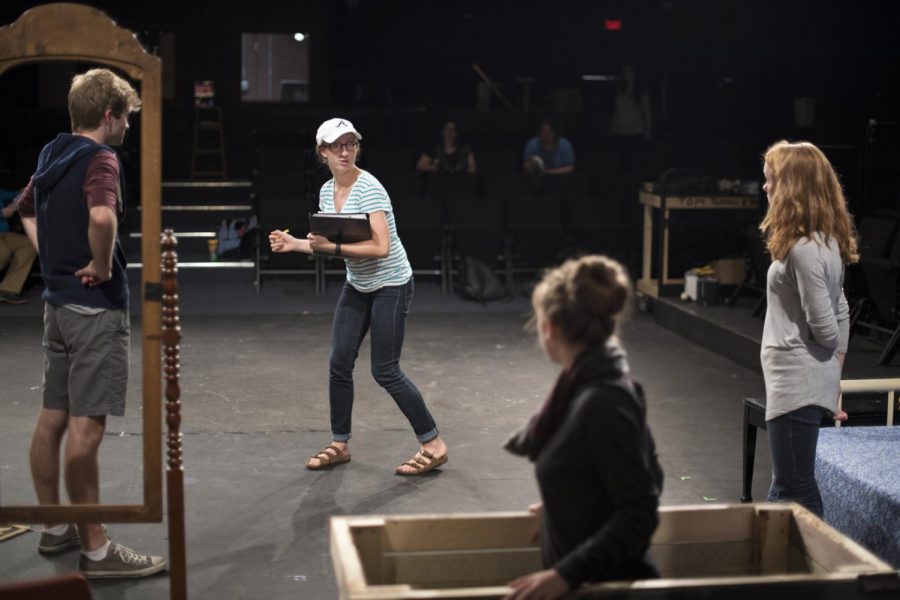 Director Chandler Smith, center and facing, a senior from Paducah, instructs actors during a rehearsal for the WKU Children’s Theatre production of Suzan Zeder’s "Step on a Crack" on Monday in Gordon Wilson Hall. Show times for “Step on a Crack” are 4 p.m. Friday and 3 p.m. Saturday and Sunday. It will be presented in the Lab Theatre in Gordon Wilson Hall. Gabriel Scarlett/HERALD

WKU students are volunteering to perform in an all-ages play aimed at teaching children a valuable lesson.

From Oct. 16 to Oct. 18, the WKU Children’s Theatre, through the department of theatre and dance will perform Suzan Zeder’s “Step on a Crack” in Gordon Wilson Hall’s Lab Theatre. The play is acted and directed completely by students.

“The show really focuses on how difficult it can be to go through changes in your life — especially at a young age — and how Ellie [the main character] copes with that through her imagination,” director Chandler Smith, a senior from Paducah, said.

The performance is a part of the WKU Children’s Theatre series, which is also set to perform “The Emperor’s New Clothes” and “Milo’s Intergalactic Circus” later this year.

This performance will tell the story of a 10-year-old girl named Ellie who lived a charmed life with her father until she returned home from camp to an unwelcome surprise: a stepmother.

Kayleigh La Grutta, a sophomore from Livermore, California, plays Ellie’s stepmother Lucille. She said one of the main reasons Ellie has trouble dealing with her new stepmother is because she has never interacted with a motherly figure.

“I think [the play’s] really cool because a lot of children’s plays are filled with random fluff, but this is a real issue that some kids are probably going through,” La Grutta said.

Assistant stage manager Josiah Howlett, a sophomore from Lexington, said although “Step on a Crack” is considered a children’s show, the theme and the humor of the play is relatable at any age.

“I think the show is going to be really fun for kids to watch, but I think that we as college students can learn from it as well,” Howlett said. “Sometimes we just have to give each other a break when we’re learning new things.”

Smith said the play not only tells a meaningful story but also offers a whimsical element displayed through imaginary characters.

Inside Ellie’s head is the “Voice,” who fuels Ellie’s negative thoughts about her stepmother. Lana and Frisbee, on the other hand, are Ellie’s imaginary friends who help her escape the realities of everyday life in a fun way.

“Step on a Crack” also offers insight into the delicate nature of the relationship between a stepchild and stepparent, according to Howlett.

“Stepparents often have a reputation of being evil and cruel to their new children, but this show definitely debunks that myth in a way that is fun and easy for kids to understand,” she said.

The Friday performance begins at 4 p.m., and Saturday and Sunday’s performances begin at 3 p.m. Tickets cost $5 and can be bought at the door.