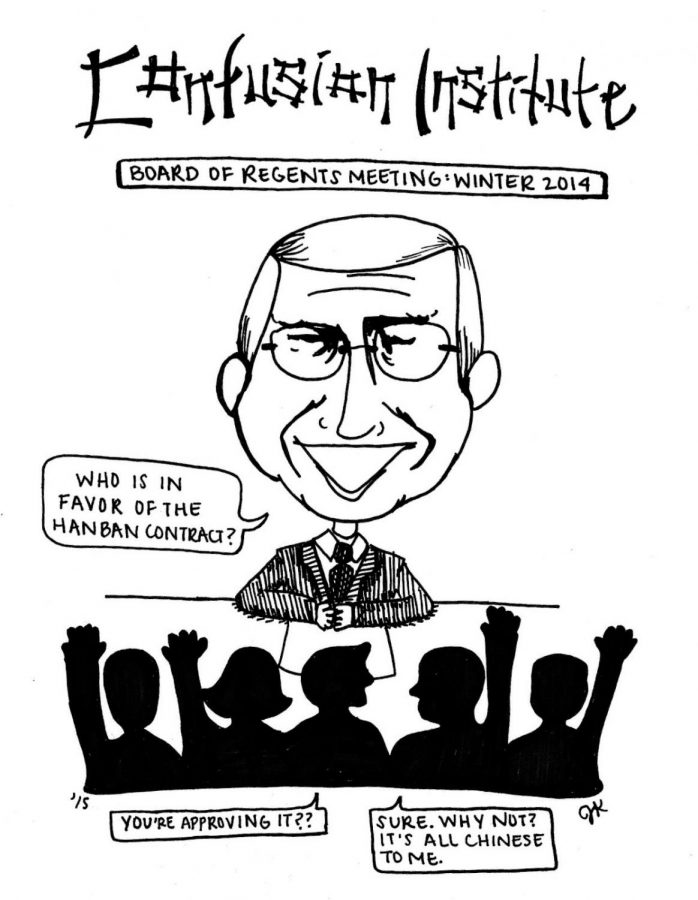 The issue: The Student Government Association tabled a resolution in support of the University Senate and Senate Executive Committee’s request that President Gary Ransdell revisit the contract he signed with Hanban last winter.

Our stance: The approval to sign this contract by the Board of Regents without receiving a copy of it seems ill-considered and premature.

During last Tuesday’s SGA meeting, a resolution regarding President Gary Ransdell’s signed contract with Hanban was tabled. If the resolution is passed, it means that SGA sides with the University Senate and Senate Executive Committee’s desire for Ransdell and the administration to revisit the contract.

The contract that Ransdell signed is a 50-year, $1.5 million non-negotiable contract for a new building to house the Confucius Institute at WKU. WKU has to match that amount. In signing the contract, there was an agreement for WKU to cover maintenance and operations costs, which is an open-ended sum. The Board of Regents approved the construction of the building. If WKU chooses to repurpose the building, it would need approval from the Chinese government, according to SGA president Jay Todd Richey.

The seemingly uninformed signing of the contract and the senate and Senate Executive Committee’s push for revisiting leave some unanswered questions about the details of the contract—specifically, whether or not anything can actually be done. If the contract has already been signed, there is little evidence Ransdell can take back his approval since it is non-negotiable.

This seems irresponsible considering the $1.5 million and 50 years of university resources, along with money for building maintenance and operation, on the line with no wiggle room to negotiate.

Through this contract with Hanban, Ransdell is giving a foreign agency a means to control part of the university’s functions. Granting an outside force the ability to make decisions at the university level, even if only for one building, seems risky and irresponsible.