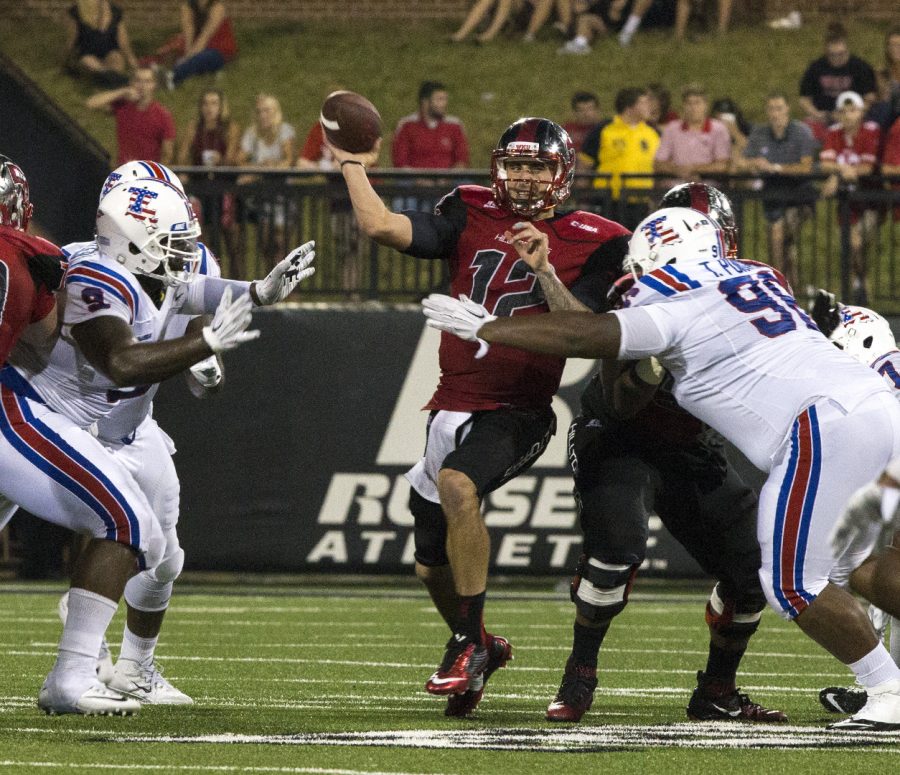 Heading into the third week of the college football season, the WKU football team has already been recognized on a national scale.

Senior quarterback Brandon Doughty, who bounced back from a quiet performance against Vanderbilt, claimed conference accolades after his performance against Louisiana Tech along with redshirt sophomore specialist Kylen Towner and junior safety Marcus Ward.

Doughty threw for 441 yards and a touchdown to earn the Offensive Player of the Week award.

Towner was named the C-USA Special Teams Player of the week after returning a 98-yard kickoff for a touchdown.  His return marked the sixth longest in WKU history.

Ward was named Defensive Player of the Week after accumulating 11 tackles with two tackles for a loss and two pass breakups. All of those stat lines marked career highs for the defensive back.

With the Hilltoppers claiming each of the league’s weekly honors, WKU became the first team to sweep the awards since Tulane in 2013.

The honors came after a 41-38 win over a La. Tech that defeated WKU 59-10 last season—a game that still marks the last loss for the program. With the win, the Hilltoppers advanced to 2-0 on the season for the first time since 2005.

Their next opponent, the Indiana Hoosiers (2-0), await less than 200 miles north and have wins over Southern Illinois (48-47) and Florida International (36-22) going into WKU’s first weekend contest of the season.

“This is a team that we think is a good football team,” Head Coach Jeff Brohm said. “Any time you get a chance to go to a Big 10 environment and try to find a way to win, it’s fun.”

Brohm said the program is excited about the opportunity playing a Big 10 opponent brings.

“Our players are excited about it,” Brohm said. “We’re looking forward to getting up there and the challenge.”

The Hilltoppers will be searching for their first win over a Big 10 opponent in program history this Saturday.

In the program’s first conference victory of the season last week, Brohm was happy with the improvements his team had made since the season opener a week prior against Vandy.

“I saw improvement. I think [during] the first quarter, our defense played outstanding. We gave La. Tech some looks they hadn’t seen before, and it definitely payed off,” Brohm said.

But the game was not without error, and those errors are what Brohm and his staff have been focusing on this week in practice.

“I do think [La. Tech] caught on, and I think we could have made some adjustments to that to help our players,” Brohm said. “So we are looking back on that and making sure we have the proper plan.”

Saturday’s contest marks the second power conference game of the season for the Hilltoppers.

After defeating SEC opponent Vanderbilt 14-12 the first week of the season, WKU faces a Big 10 opponent for the sixth time in program history. The Hilltoppers’ record against the conference sits at 0-5 with two losses to the Hoosiers and losses to Illinois, Nebraska and Wisconsin.

But the Hilltoppers enter this game with a new mentality.

In their seventh year of membership in the FBS, the mindset has changed for many WKU players.

The Hilltoppers square off with IU in Bloomington on Saturday at 3 p.m.