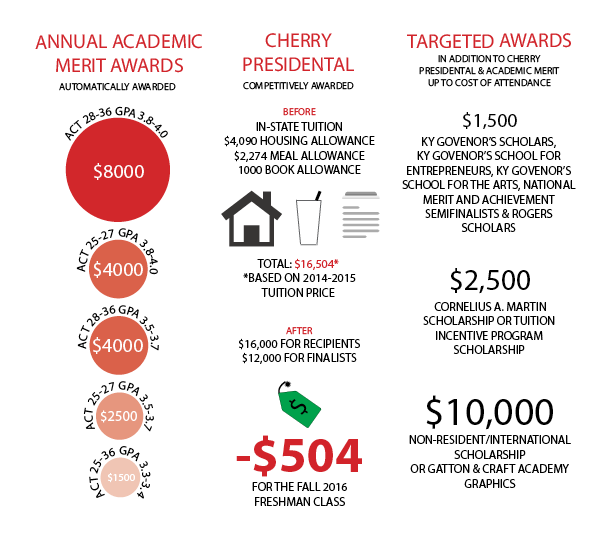 Marshall County High School senior Elizabeth Wells posted a picture of an email response from WKU regarding scholarships with the caption “What is ‘good enough’ these days??” Stated in the email, the scholarship amount for an alum of the Governor’s Scholars Program, GSP, had decreased from covering in-state tuition to offering only $1,500.

This change is a part of the overall restructuring of WKU’s scholarship program for beginning freshmen starting fall 2016. The restructuring was announced within 24 hours of the Twitter frenzy. However, on Tuesday evening, some WKU accounts, such as the WKU Honors College account, were responding to the Twitter buzz.

Wells’ tweet prompted other students to speak out about the diminished awards to competent GSP alumni. Other Twitter users mentioned how the University of Kentucky and WKU are “ignoring GSP” and how “in-state universities need to get their s*** together.”

UK recently faced controversy over its changes to a scholarship for Governor’s Scholars that prompted a petition to change the requirements back. UK had previously offered a $40,000 Presidential Scholarship if students scored a 28 on the ACT and had a grade-point average of 3.3. The requirements were changed to a 31 on the ACT and a 3.5 GPA.

Even the University of Louisville’s Office of Admissions chimed in on its Twitter account, saying how UofL “values the work” and “involvement of KY students” and “recognizes their accomplishments.”

However, Cindy Burnette, the director of WKU’s Student Financial Assistance, said the newly designed scholarship program may actually award more money to some GSP alumni because in addition to the $1,500 they are eligible for, they can also receive an automatic merit award based solely on their incoming GPA and ACT score.

Burnette said at least 120 more GSP alumni will qualify for an award.

Wells said the reason she is so upset over the changes is because she wasn’t informed of the changes while attending the GSP program, so she had garnered false expectations of the scholarship amount.

“We thought we would receive the scholarship we were told we would,” Wells said.

When informed of the changes, she said GSP alumni were forced to reevaluate their future plans. Now, Wells is reconsidering WKU.

“My want to go to Western hasn’t changed at all, but my doability has,” Wells said.

Honors College Executive Director Craig Cobane said anytime there is a change as substantial as this one, people need some time to understand what’s happening.

“We’re having to shift our focus a little bit to getting the word out,” Cobane said.

He said the Honors College is going after the GSP demographic aggressively as increasing numbers of GSP alumni are attending WKU. Despite the new scholarship program, he said, the Honors College will continue to recruit students based on criteria such as their contributions to the community and involvement in research, not just their GPA and ACT scores.

The new scholarship program has been in the works for the past year, Burnette said.

WKU restructured its scholarships in part because the university had overstepped its budget for awards; at the same time, it endured $7.9 million worth of budget cuts and reallocations across all university departments.

Burnette said one of the goals of the new program is to provide a larger number of students with more scholarships to award them for their hard work and to help bridge tuition gaps.

The new program is heavily based around Annual Academic Merit Awards. The merit awards range from $1,500-$8,000 and are automatically awarded if the incoming student applies by Jan. 15, 2016—the deadline. The merit awards are based on a student’s ACT score and unweighted GPA, and it places them within a range of scholarship dollars.

Burnette said that on top of these merit awards, targeted awards are also available for students based on participation in certain programs or groups. Such programs include Kentucky Governor’s Scholars, National Merit and Achievement Semifinalists and Rogers Scholars.

Burnette said the competitive Cherry Presidential award will be “a little tighter.” Forty-five students will now be invited for an interview instead of 60. She said this change was implemented to make the award more competitive.

The new program has expanded awards for transfer students as well. In the past, transfer awards were limited to students transferring from the Kentucky Community and Technical College system. Now students who transfer from any school are eligible.

“If they transfer from another school and they fall in these GPA ranges, then they would be eligible to compete for scholarships,” Burnette said.

Burnette said a new scholarship portal will also be launching within the next few weeks. In addition to the merit awards, students would also be eligible to apply for foundation scholarships through the College Heights Foundation.

“We’re hoping this will allow students to maximize the amount of resources they’re eligible to receive,” she said.