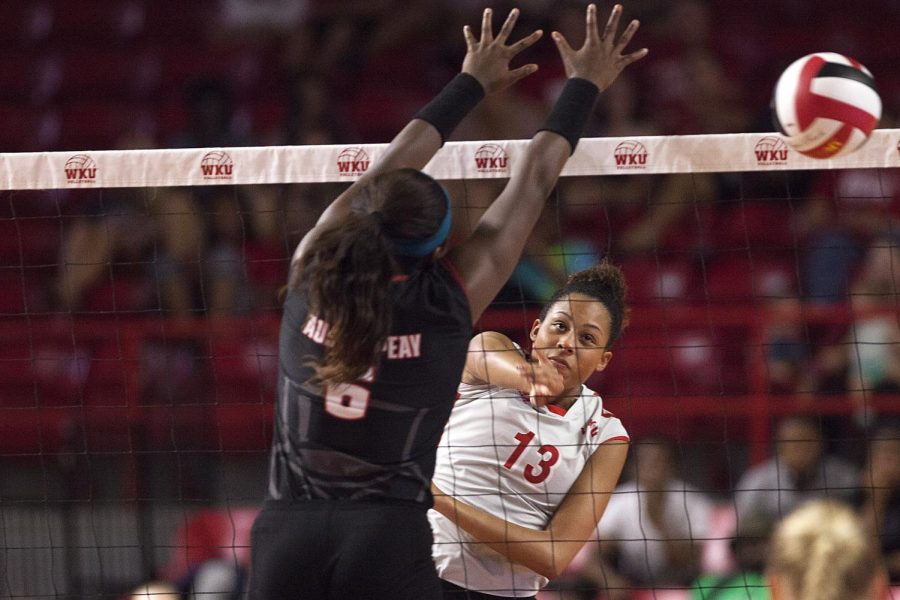 The Lady Toppers (6-1) were on a roll Tuesday night in their home opener against the Governors of Austin Peay (2-6) with a sweeping win in Diddle Arena.

Prior to the contest, Head Coach Travis Hudson was formally presented with his 500th career-win trophy ball to a standing ovation. He was also recognized for winning the HotelRED Invitational in Madison, Wisconsin.

With the pre-match honors—not to mention the relief of playing at home after opening the 2015 season with six away games—the team was jubilant in its home arena.

“There’s no doubt that our girls feed off this great crowd, and it was exciting to be in Diddle for that reason,” said Hudson.

The Lady Tops came out swinging on their home court.

With a commanding 25-13 win in the first set, standout freshman Rachel Anderson was hitting a team-high .500 with four kills off eight attempts.

It was also business as usual for sophomore preseason all C-USA setter Jessica Lucas. Lucas tallied all 10 of the Lady Tops’ assists in the first set.

“I’ve had to get my timing down, adjusting to how they set the ball, but it has kinda just started to click,” said Anderson. “I think the crowd really gave us more energy. It can get tough without the support in the stands.”

The second set started a bit slow. The first timeout left the score 11-8 in favor of the Lady Toppers.

Coming out of the break, senior middle hitter Noelle Langenkamp took over. She tallied a team-high .545 hitting percentage with seven kills off 11 attempts at the end of the second set; this allowed the Lady Tops to win 25-13. Lucas had 14 more assists in the second set, which brought her total to 24 of the team’s 26 assists going into the third set.

“I love Diddle; I love the atmosphere. It’s so much easier to play at home,” said Langenkamp.

WKU swept Austin Peay with victory in the third set while allowing the Governors to tally more points than they did all night. The Lady Tops didn’t control the third set as tightly as the first two.

With a 25-17 victory and a nightly low .286 team hitting percentage, Jessica Lucas came through with 11 assists, and Haley Bodway tacked on five more kills to bring her night’s total to 12.

“It’s tough when you win by a good margin in those first two sets; it’s difficult to  keep your focus,” Hudson said. “I thought we let our foot off the gas there in the end, but luckily we were able to close it out.”

While the Lady Toppers left the night with their fourth sweep of the season, there are still a few things Hudson thinks his team needs to target to move forward.

“We are still just trying to catch a little bit of a rhythm offensively. We’re getting some production offensively, but I would not say we are in a rhythm,” Hudson said. “Tomorrow at practice, that will be the focus again.”

He even singled out some players he wants to work with in preparation for this weekend.

“You know I got (sic) to find a way to get Sydney Engle started. That’s my biggest concern right now,” Hudson said. “She’s really struggling right now on the offensive side. Tomorrow’s practice will be dedicated to trying to find that rhythm.”

Looking forward to this weekend, WKU is hosting Missouri State and Northwestern on Friday and Furman on Saturday as part of the Holiday Inn University Plaza Invitational.

“You know in the loss against Dayton, we had played a game against a very good SIU team and then had to play Dayton just a few hours later, which I think posed some challenges to the girls,” said Hudson.

“I’m concerned about that again,” Hudson said. “We play a fantastic Missouri State team on Friday and then have to play a Big Ten team in Northwestern later that day.”

The first game on Friday is set to start at 1 p.m. against Missouri State, and the second contest is set to begin at 7 p.m. against Northwestern. The Lady Toppers will round out the tournament with a match against Furman at 11 a.m. on Saturday.