AppleFest: a sweet beginning to autumn 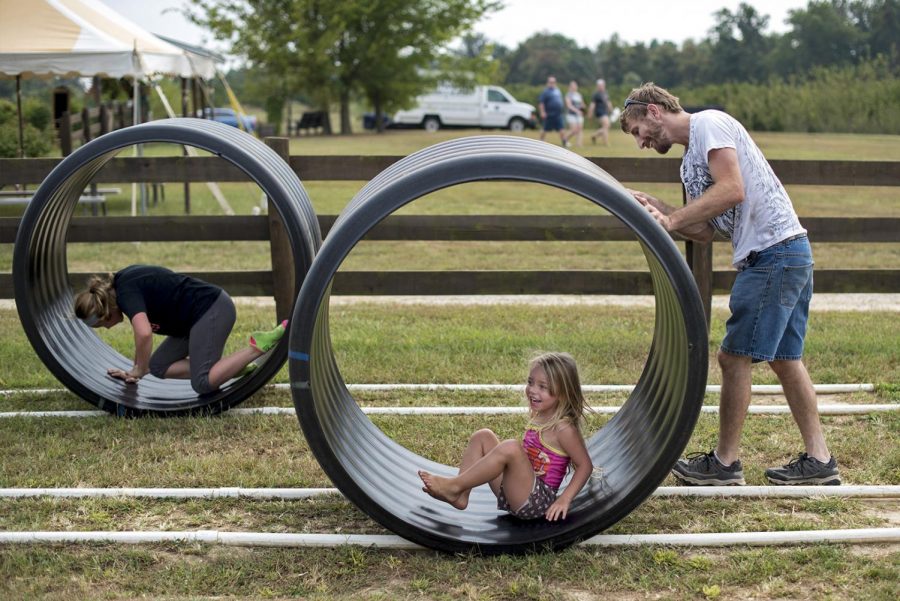 Tim Pennington, right, of Cave City plays with his daughters, four-year-old Khloe Pennington, center, and 11-year-old Adrianna Pennington, left, Saturday at Jackson's Orchard. The Penningtons visited the orchard to pick apples and play on the playground.

Bowling Green’s apple lovers got a taste of autumn this Labor Day weekend at the annual AppleFest celebration hosted by Jackson’s Orchard.

Held for over 30 years, the festival serves the orchard’s first batch of apple cider of the season, as well as other treats like apple cider slushies, apple pies and caramel apples.

Orchard co-founder Bill Jackson said AppleFest is the orchard’s way of kicking off the fall season.

“It’s a nice time of year to come out to the farm,” Jackson said. “It’s just a time to draw everybody’s attention to the fact that fall is here.”

According to Annette Madison, who has worked at the orchard for 11 years, the annual festival draws crowds of people from Bowling Green as well as people from out of town.

Along with assorted treats made from apples and peaches, this year’s festival also offered a pumpkin patch, a play area for children and a large timeline that exhibited the orchard’s long history.

Despite so many treats and activities, the orchard’s wide variety of fresh apples—Golden Delicious, Jonathan, Gala and Fuji—is still the best seller at the festival.

“Some people enjoy picking them and others like them right off the shelf,” Madison said.

Jackson’s Orchard, founded by spouses Bill and Shirley Jackson, celebrated its 50th anniversary earlier this year. The orchard has become a full-scale family business; the Jacksons’ children and grandchildren are staff members.

Jackson’s Orchard has several products that are certified by Kentucky Proud.  These include apples, apple cider and peaches. Bill Jackson said the business’s association with Kentucky Proud has helped bring people to the orchard.

“At first only the growers knew what [Kentucky Proud] meant,” Jackson said. “Now it’s caught on with the public.

Bill Jackson largely attributes the success of the business to the orchard’s strong connection to the community.

“People like to buy from local growers,” Jackson said. “[My customers] know me and they know that we spray and take care of the apples.”

“It’s all local,” Cline said. “Nothing is imported from other states or other countries; it’s all from Bowling Green.”

Despite his long history with the business, Bill Jackson shows no signs of slowing down anytime soon.

“I hope it grows for another 50 years,” Jackson said. “We’ll try our best to provide [the Bowling Green community] with a constant supply of peaches and fresh, juicy apples.”