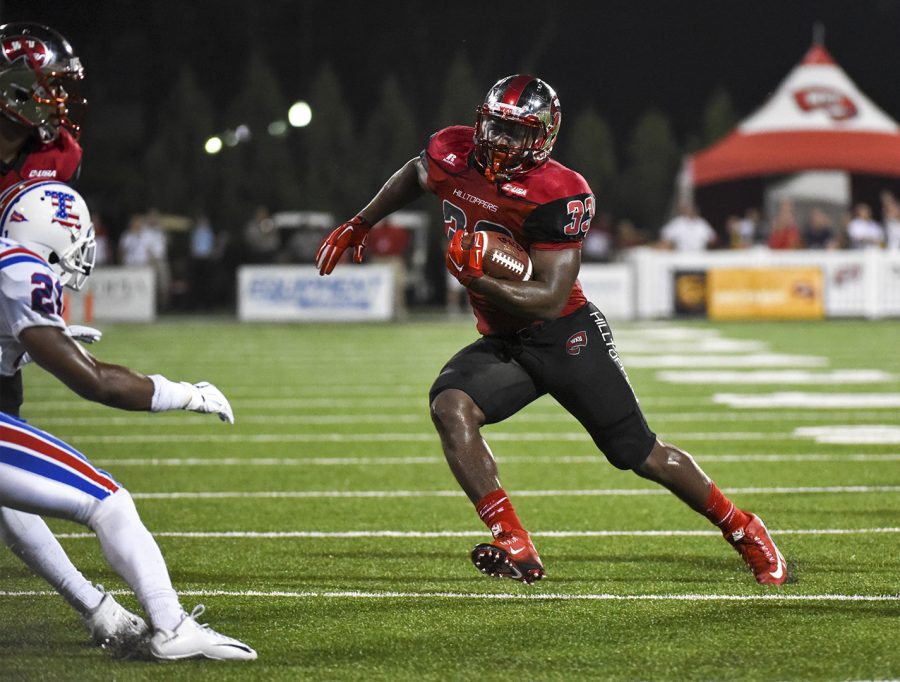 WKU running back Leon Allen (33) runs upfield during the Hilltoppers’ 41-38 victory over Louisiana Tech Thursday at Smith Stadium. Allen left the game early in the third quarter with a knee injury. On Friday, Head Coach Jeff Brohm released a statement saying Allen would not return for the rest of the season. Andrew Livesay/HERALD

Just two games into the season, injuries are already having a major affect on the WKU football team. Veteran players such as seniors Leon Allen, Wonderful Terry and Jared Dangerfield have all been limited in playing time.

The most recent and most impacting injury is the knee injury for Allen.

The running back went down in the Hilltoppers’ victory over Louisiana Tech after being undercut by a defender on a reception. It was announced Friday that Allen would be out for the remainder of the 2015 season.

Allen led all of Conference USA and ranked seventh nationally with 2,018 yards from scrimmage in 2014.

While redshirt junior running back Anthony Wales continues to miss time with a hamstring injury, redshirt freshman D’Andre Ferby will fill the void at the running back position. Ferby came into Friday’s game and finished with 14 carries, 43 yards and a touchdown.

“I think he’s a heck of a player. He’s more than capable, and he’s ready to step in if we need him,” senior quarterback Brandon Doughty said. “Yeah, we lost our 1,500-yard rusher, but there shouldn’t be a hiccup. There shouldn’t be a drop off at all because those guys are capable.”

Ferby hails from Nashville, where he won a Division II 2A state championship at Ensworth High School. Named Tennessee’s Mr. Football in 2013, he was redshirted the following year.

“I mean, this is what you come to college football to do,” Ferby said. “I didn’t come here to be Big Red or nothing (sic), so it feels good, and hopefully I can keep making plays.”

Senior cornerback Wonderful Terry is the next Hilltopper to catch the injury bug. After injuring his ankle in the first quarter of the Vandy season opener, Terry was once again limited against La. Tech and was forced to leave the game.

Terry headlines a shaky secondary at best for the Hilltoppers. He was named 2014 All-Conference USA Second Team and tied second nationally with three defensive touchdowns.

“I don’t know how long [Terry] will be out,” Head Coach Jeff Brohm said. “It may be a little while as well, so other guys have to step up, which they did, and played a lot against a spread team. We’ll just have to get the other younger guys ready and put them in the rotation.”

Others hampering injuries include seniors receiver Jared Dangerfield and linebacker Dejon Brown. Dangerfield hauled in four catches for 44 yards against La. Tech after nursing a hamstring injury throughout training camp, and Brown returned to action for the first time in 2015 last Thursday.