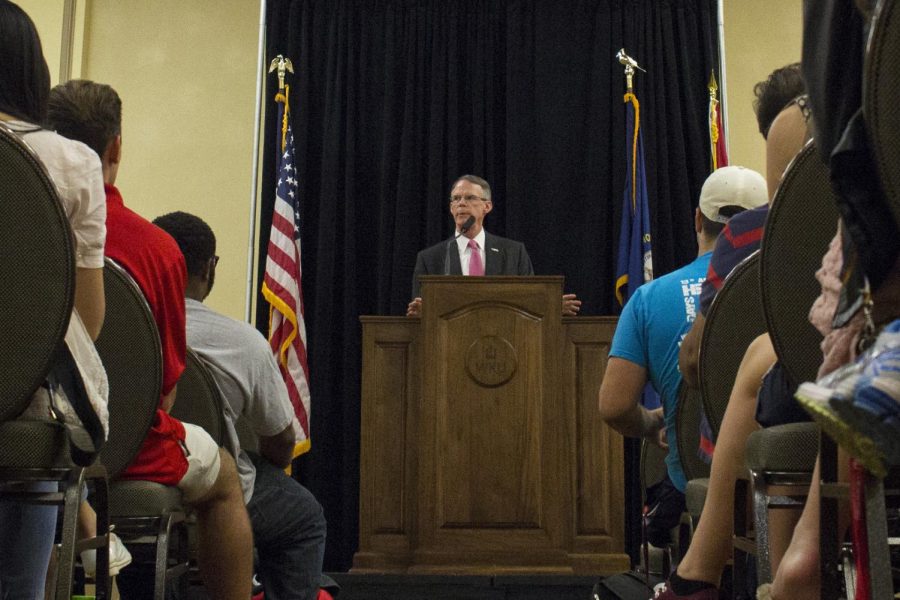 Richard Davis — chairman, president and CEO of U.S. Bancorp — talks to students, faculty and staff during a lecture Davis gave on Tuesday at Augestein Alumni Center. This was Davis’s second visit to the hill. He talked about being active in politics and the community and addressed what employers are looking for when they hire people. Shaban Athuman/HERALD

Preparing Hilltoppers for the workplace of the future, Richard Davis gave a lecture on Tuesday about leadership.

Davis is the chairman, president and CEO of U.S. Bancorp. His lecture was given at the Augenstein Alumni Center and was titled “Leadership in a Global Economy.”

Jeffrey Katz, the dean of Gordon Ford College of Business, said the event was sponsored by the Center for Leadership Excellence and the business college.

“He certainly has a global view of the world and has great lessons about leadership,” Katz said.

Davis’ lecture touched on the challenges of leadership in the future. It addressed leadership outside the company setting, volunteering, influencing others and similar topics.

“I’m so excited because you think this is going to be so awful,” Davis said. “You are so dreading some bank guy in a suit to come up and talk to you, but I’ll try to surprise you and make this a little more interesting.”

He began his lecture by telling the audience the story of Roger Bannister.

He said Bannister became the first athlete to run a mile in less than four minutes on May 6, 1954.

According to History.com, Bannister was running for the Amateur Athletic Association against Oxford University. He won the mile race with a time of 3 minutes, 59.4 seconds.

Davis’ anecdote about Bannister tied into leadership as he encouraged students to do something no one has done before.

A good portion of Davis’ lecture focused on a survey he conducted of 150 CEOs from the largest companies in the United States. These companies, both public and private, included foundations and not for profits.

Questions to company leaders asked what they looked for in leaders, what kinds of challenges they faced and what they would look like going forward.

Polling highest in the survey was management and leadership style as a skill company leaders are looking for. Davis said this is a skill people make and own themselves.

“Leadership is not management. Management is a managing process — getting it perfectly right. Leadership is managing the people and making something happen that wasn’t there before,” he said.

Davis also emphasized people’s giving back to the community they live in and maintaining leadership roles in those communities.

He challenged students not to walk across the stage with their diploma in hand before having volunteered somewhere that matters to them.

“The greater good is always worth fighting for because it affects us all,” Davis said.

President Gary Ransdell gave a short speech to the audience upon the conclusion of the lecture. He said leadership is important for a university.

“If you’re looking for what that ‘Spirit Makes the Master’ thing is all about, leadership is at the very core of what our spirit is about,” Ransdell said.

Ashlea Moses, Brandenburg freshman, said she came to the lecture because her business communication class offered extra credit for it.

Moses said she was expecting the lecture to be more business-oriented rather than about being a person and working with others.

“Pay attention to how you influence other people; that’s the biggest thing I got from it,” she said.