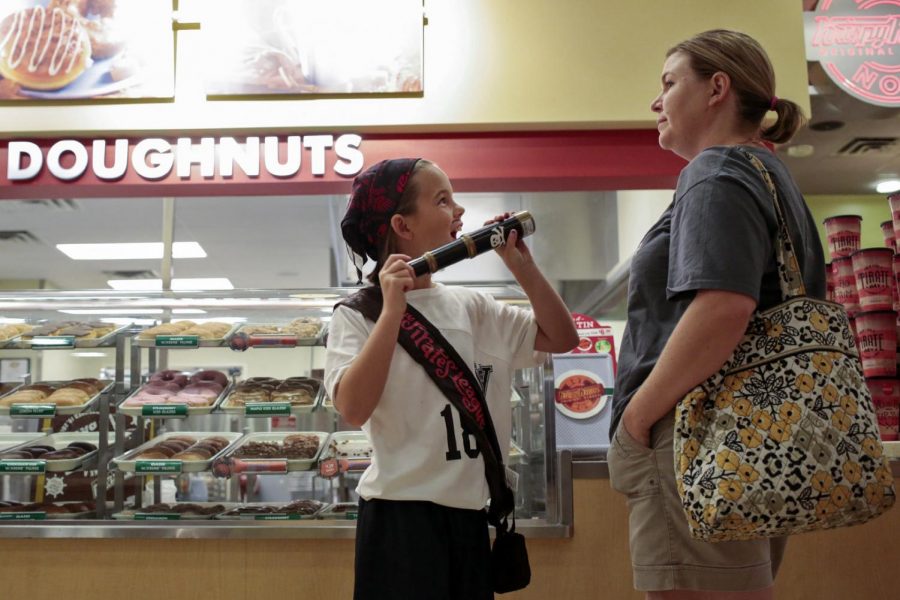 Peg legs, parrots and eye patches abounded at Krispy Kreme on International Talk Like a Pirate Day on Saturday.

The doughnut chain offered a free glazed doughnut to any buccaneer who was willing to talk like a pirate; it offered the bounty of a dozen doughnuts to any landlubber who wore a full pirate costume.

At the Bowling Green restaurant located at 798 Campbell Lane, some customers came dressed in pirate Halloween costumes while others showed up in handcrafted outfits.

“We’ve seen a lot of pirates,” Wren said. “A lot of them [have made] hooks for their hands out of tin foil. We’ve had one customer make a hook out of a coat hanger, and she also made an eyepatch.”

According to Wren, the Bowling Green location had already given away over 150 dozen doughnuts by 2 p.m.

According Krispy Kreme’s website, customers could earn a free doughnut by wearing proper pirate attire consisting of at least three of the following clothing articles: an eye patch, a pirate hat, a pirate flag, a bandana, a peg leg, a parrot on one’s shoulder, a pirate shirt (or loose white shirt), knickers, a leather belt, silver or gold necklaces and earrings, a pirate hook, pointy black boots or ragged brown sandals.

Nashville native and WKU sophomore PG Taylor, who is a production worker at Krispy Kreme in Bowling Green, noted customers are taking full advantage of the promotion.

Most customers, Wren said, opted to talk like a pirate rather than dress like one because they weren’t aware of the event until they arrived at the restaurant.

According to Taylor, this is the third or fourth year for the event at Krispy Kreme. Taylor worked the event last year at a different Krispy Kreme location.

“All of the Krispy Kremes are doing this,” Wren said. “I don’t know who came up with Talk Like a Pirate Day, but Krispy Kreme and their marketing department took the ball and ran with it.”

Ethan Cale, 17, from Clinton, Utah, visited Krispy Kreme at 9:30 p.m. with a gang of five friends who were fully clothed in pirate attire to collect their free doughnuts.

The group walked away with five dozen glazed doughnuts, all free.

“We were going to watch a football game tonight, and then we decided that we had too much time,” Cale said. “So what’s better than getting free doughnuts?”