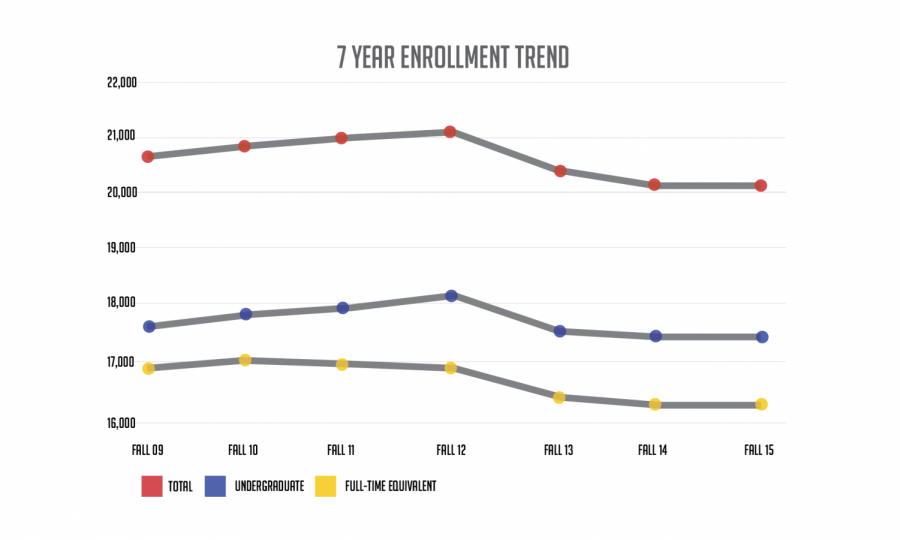 Enrollment numbers have stagnated in a departure from the trend of recent years.

Compared to fall 2014 enrollment numbers, enrollment dropped by 32 students totaling this year’s enrollment as of September 19, 2015 at 20,146 students.

Meredith said the dramatic decrease was due to a combination of factors including rise of admission standards and availability of federal Pell grants.

Since fall 2013, enrollment has decreased overall. However, this year’s enrollment only dropped by 0.2 percent.

Meredith said once the census data is finalized in October, he doesn’t expect to see any substantial changes to enrollment numbers.

In order to combat a sizable decrease in enrollment, Meredith said the office of admissions and enrollment management spent the past 12 to 15 months aggressively recruiting students.

“The admissions office has branched out and extended its reach in to out-of-state and out-of-region markets,” Meredith said.

Meredith said recruiting efforts extended into states such as California, Texas and Florida.

“It’s a variety of factors that we’ve done to maintain and to finally try to turn this tide around with the first-time freshman showing some uptick and new-transfers showing a positive,” he said.

The number of first-time first-year freshmen increased by a total of 43 students between the years 2014 to 2015.

“It’s imperative we continue to strengthen dual-credit relationships which in turn will later turn into full-time enrollment here at Western,” he said.

Meredith said the drop in enrollment of seniors is due to more students graduating on time.

“They’re (seniors) graduating on time,” Meredith said. “They’re beating the national averages which I think is a positive for everyone, for the students and the institution.”

Enrollment for transfer students increased across the board.

“We’re receiving very highly capable, academically competitive class,” Meredith said. “They’re ready to hit the ground running which means they will be successful while they are here.”

Meredith said the next enrollment cycle will be pivotal for WKU. He said the momentum of recruiting efforts will grow.

Meredith said he hopes WKU will begin to see more positive trends in fall 2016 and fall 2017.

“We’re giving all of our energy to bringing very highly-capable, more competent students to the Hill,” Meredith said. “We’re not going to slow down those efforts. We’re just going to make them bigger, better, faster.”