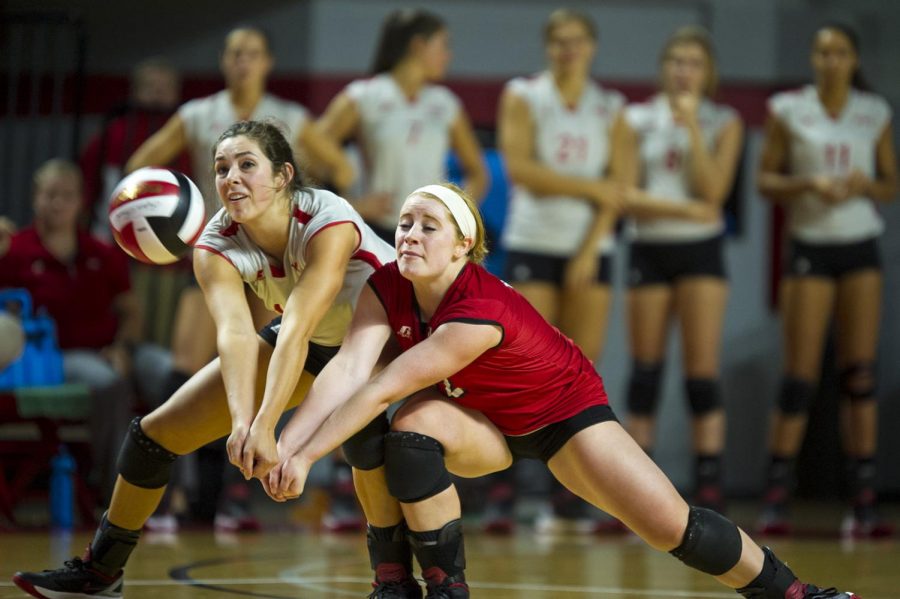 WKU junior Georgia O’Connell (12) and Sydney Engle (16) collide while receiving a serve during a match against Missouri State on Sept. 11 at Diddle Arena. Nick Wagner/HERALD

The Lady Tops are coming off a successful nonconference stretch.

The 12-2 Hilltoppers opened with swagger as they took down the Wisconsin Badgers, then ranked No. 5, in the HotelRED Invitational.

Winning tournaments and taking down big-time programs generates just the kind of momentum Head Coach Travis Hudson was looking for to carry his team through a Conference USA schedule that poses some threats.

The Lady Toppers are 3-0 against Power Five conference teams with their wins over Wisconsin, Northwestern and Alabama.

They have won a handful of invitational tournaments this season in which the MVP is often one of the Lady Tops.  With some highly touted competitors, including the University of Texas at San Antonio, Rice and Florida Atlantic University, the C-USA schedule will be all but an easy ride.

Hudson has said WKU has had a target on its back since the beginning of the season. His squad won the C-USA Championship last year in its inaugural season. Across the conference, teams are preparing for and looking forward to a chance to knock off the returning champs.

“We were kinda laying in the weeds. Nobody knew what to expect from us, and we came in and played very well,” Hudson said. “I also left year one in C-USA with a tremendous amount of respect for the talent level in the league.”

A few teams in particular will pose some big threats to the Lady Toppers this season; most of them presented a challenge last year in some tough battles.

“I really think it’ll be a similar group that was there at the end last year. San Antonio, who we shared the regular season crown with, will be very good again; Rice, who we beat in conference championship match, will pose some threats around the league; and Florida Atlantic is returning the majority of their roster, and they were very, very good last year,” Hudson said.

C-USA Setter of the year

The other teams around C-USA are also talented, but these three teams have the best chance of really pressuring WKU during competition.

“We are used to having the target on our back after being picked to win the conference almost every time in the Sun Belt Conference, so I think we are ready for the road ahead and getting everybody’s best game,” senior middle hitter Noelle Langenkamp said.

The Lady Tops are ready for the challenges conference play presents and are prepared to come in strong and establish themselves in their second season.

“These kids came here to play for championships,” Hudson said. “There’s a certain amount of pressure that comes with that.”