Hilltoppers fall to Indiana, move to 2-1 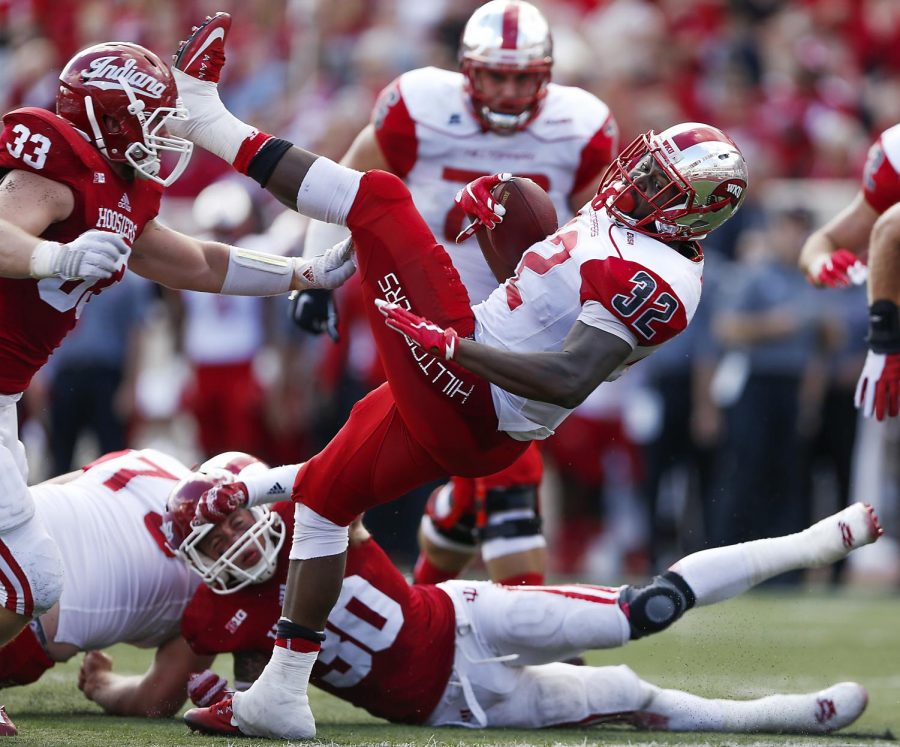 Western Kentucky running back D'Andre Ferby (32) is tackled before the end zone during a NCAA game at Memorial Field, in Bloomington, Ind., Sept. 19. Michael Noble Jr./HERALD

But the Hoosiers had other plans.

Instead, the Hilltoppers were bested in a 38-35 shootout which featured career performances from both quarterbacks and poor play by both defensive units. WKU (2-1) drops to 0-3 against Indiana all-time and their chances of an undefeated season have come and gone.

The first half went in favor of the Hilltoppers. The WKU offense got off to a hot start as redshirt freshman running back D’Andre Ferby scored two rushing touchdowns in the first two quarters. Senior quarterback Brandon Doughty threw for 352 yards and a pair of touchdowns in the half to senior tight end Tyler Higbee and junior Taywan Taylor.

WKU jumped out to a 28-17 halftime lead, but it was the poor play of the defense in the second half that led to the Hilltoppers demise.

WKU was out-scored 21-7 in the second half which included 639 of total yards against the Hilltopper defense. Doughty threw two interceptions that both led to Hoosiers points in the third quarter while Indiana continued to dominate on the ground, out-rushing the Hilltoppers 284-84.

The Hilltoppers’ only points of the second half came with just under six minutes remaining in the game in the form of a three yard touchdown pass from Doughty to senior Jared Dangerfield. A blocked field goal attempt by WKU’s senior kicker Garrett Schwettman in the third quarter proved pivotal to the final outcome, it was his first miss of the season.

The Hilltoppers next game will be September 26th at home against Miami (Ohio).