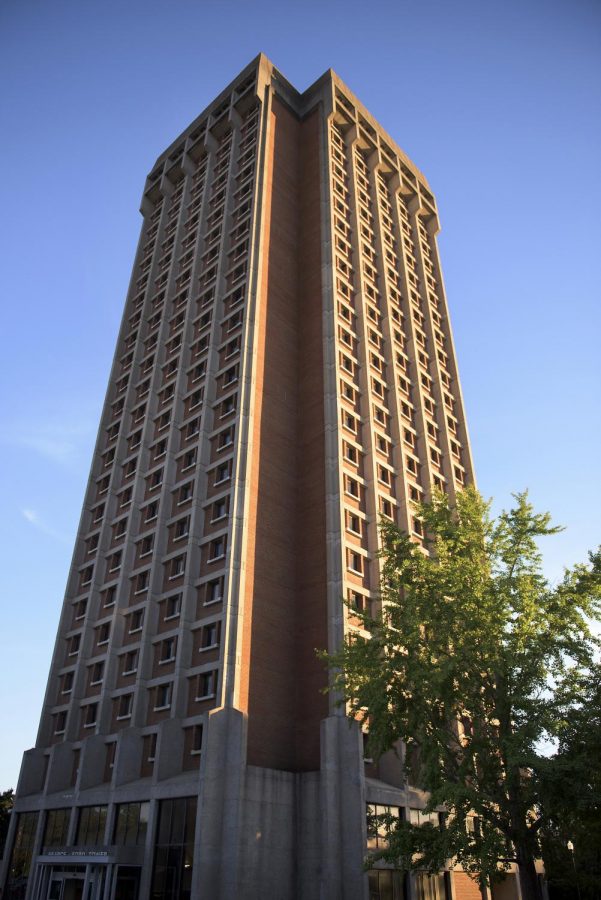 Pearce-Ford Tower, an all-female dorm that houses 857, is located on the south end of campus. Matt Lunsford/HERALD

Brian Kuster, the director of Housing and Residential Life, was unable to clarify specifically what caused this sudden shortage of RAs in PFT.

“We had one opening, and we have eight more openings,” said Kuster.

Thirty students have already applied to become RAs at PFT, and HRL is searching for more desk workers to alleviate the pressure on current employees.

“We are actively trying to hire staff in the building,” said Kuster.

Maya Lee, a freshman from Chicago who lives in PFT, recently lost her RA.

She explained that her RA called an impromptu meeting on Thursday, Sept. 17, and told her floor she had been fired. Lee said her RA moved out by Sunday.

Lee’s RA left PFT on Sunday, Sept. 20. A RA from another floor on PFT is now in charge of Lee’s floor.

Morgan Lionberger, a freshman from Chicago, also lost her RA in PFT.

Lionberger said her RA went from room to room to tell her residents she would no longer be working at PFT.

Lionberger reminisced about the times her RA spent with fellow residents and participated in floor activities with them.

“Our RA kept us together,” said Lionberger.

Ellen Buchanan was one of the RAs in PFT who was let go. She declined further comment but said she and the others are trying to move past what happened.

The Herald reached out to Sarah Haught, coordinator of PFT, but she declined to comment about the challenges of RA vacancies in PFT.

The Herald reached out to Nikki Eversole, residence hall director of PFT, but she declined to comment about how the current RA shortage was being handled and when positions are expected to be filled.

Eversole said RAs have been told not to talk to the press.