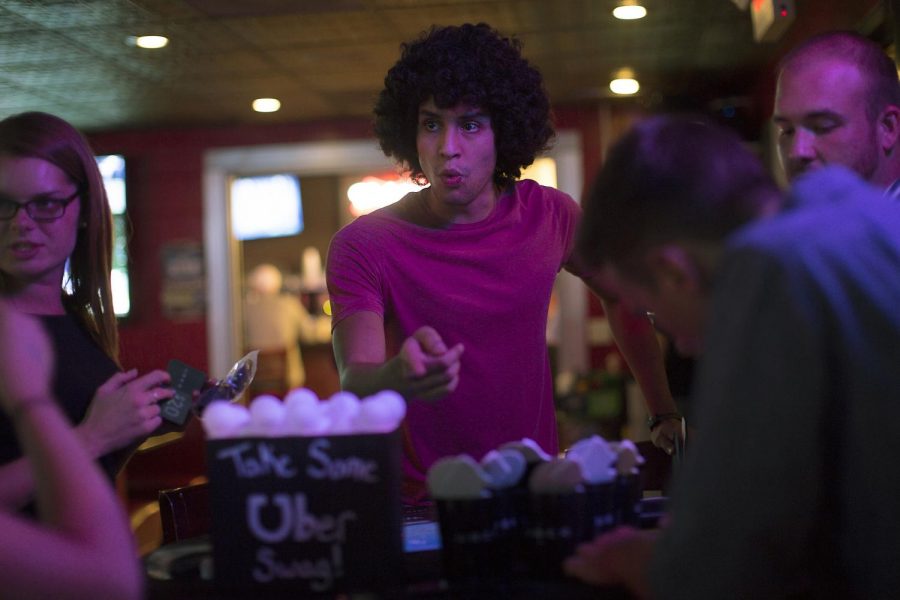 Local bartenders Katherine Holman, left, and Blake Norris, middle, are excited as they gather information about Uber during a promotional night at Hilligan's Bar and Grill Thursday, Aug. 27. The two see this opportunity as a way to lower drunk driving incidents in Bowling Green. "I have people who get drunk at the bar,” Holman said, referring to her clients at Win-O’s. ”With this available, it'll settle this powder keg."

WKU students can now get a ride with the click of a button.

Uber, a company with a smartphone app that connects users to background-checked drivers who can taxi them around the city, launched its services in Bowling Green on Aug. 27.

For now, the only Uber service offered in Bowling Green is uberX. This is Uber’s standard and least expensive service. Other Kentucky cities which offer Uber services are Louisville and Lexington.

SGA President Jay Todd Richey is excited about the safety Uber brings to campus. SGA currently provides funds to Parking and Transportation Services for the Purple Line, which runs from 10 p.m. to 2 a.m. on Thursday, Friday and Saturday nights.

“Purple Line has been very beneficial,” said Richey. “I’m not looking at replacing it. I’m looking forward to Uber being another option.”

Uber has many of the same qualities as the Purple Line, according to Richey. It is affordable and will keep students safe.

Uber drivers drive their own cars, set their own schedules, choose who they pick up and keep 80 percent of the fare customers pay.

“To be successful, you have to be willing to put in the hours,” said Uber driver Rick Abbott, who gave the first Uber ride in Bowling Green.  He typically works at night, and his peak hours are when the bars close between 1 a.m. and 3 a.m.

The base fare is $2, and users are charged 20 cents per minute and $1.50 per mile. The minimum fare is $5. Uber users can set up an account that links to a credit card, so cash is not involved in the transaction. After users complete a ride, Uber emails them a receipt with details about the trip.

“It’s a blast,” he said. “I come home laughing some nights.”

Discipline is important for Uber drivers because there are no set hours or minimum or maximum hours, Abbott said.

“I have a personal goal of so many trips a week,” said Abbott.

Drivers must be at least 21 years old, pass a background check and have an eligible car. Abbott said it usually takes one to two weeks until a new driver can drive.

For Telia Butler, public relations manager at the Bowling Green Area Convention and Visitors Bureau, Uber is an “asset” and “progressive step.”

Transportation will improve especially for tourists on vacation and businesspeople at conventions, she said.

Tony Matthews, the vice president of Partnership Services at the Bowling Green Chamber of Commerce, said the reason Uber is interested in Bowling Green is the town’s population makeup and business industry.

“We continue to have more and more new business open up in the Bowling Green area and are very excited that we are someone that continues (sic) to have this type of development,” Matthews said.