Changing of the guard | WKU defense showing improvements in 2015 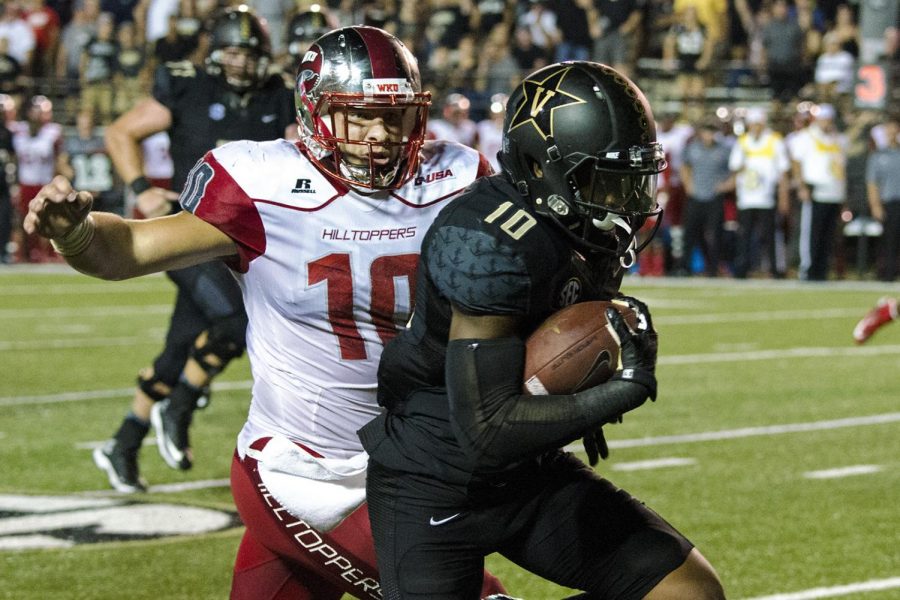 While the WKU football team of 2014 possessed one of the best offensive units in the country, the opposite could be said of the defense.

Defensive coordinator Nick Holt and his unit gave up an average of 39.9 points per game last season and ranked in the bottom third in both passing and rushing defense in the FBS.

But there seems to have been a revitalization of the WKU defense in 2015. The unit has nine defensive starters returning and two standout transfers making a name for themselves just one game into the season.

The Hilltoppers’ (1-0) first victory of 2015 came not from their overpowering offense but from their stingy defense, which kept them in a close 14-12 contest.

WKU on the road held Vanderbilt to only three points at halftime and only 393 total yards at fulltime. Cap off the night with three defensive turnovers, and WKU won a type of game that it would have been blown out in last season.

“I think [Head Coach Brohm] said it today that we played til (sic) the end. We didn’t let up,” junior safety Marcus Ward said. “He was preaching during the practice before the game, up to the game, that we have to be a second-half team.”

This idea of finishing out games is one Brohm and the rest of his staff have especially been trying to ingrain into the program.

“We can’t just come out the first half and play hard and then kind of back down,” Ward said. “So we stuck it out til (sic) the end, and we made sure that we played harder than [Vanderbilt] and it just paid off.”

Leadership and experience are two qualities the defensive unit possesses this season.

Starting at the defensive line, both of the Hilltoppers’ sack leaders from 2014, seniors Gavin Rocker and Bryan Shorter, return for their final season.

WKU’s newest addition to the line is senior transfer Jontavious Morris. He joins the team with one year of eligibility after playing three seasons at UAB and will look to stifle the opposing team’s run game.

The linebacker core made a huge impact in the first game against Vandy. Seniors Nick Holt and Nick Newton made their first career interceptions—both in the endzone—while another UAB transfer, sophomore T.J. McCollum, registered the most tackles on the team: eight.

“Well, as a great team, if the offense isn’t working, the defense has to pick them up,” senior tight end Tyler Higbee said after the game. “The defense has been hearing a lot after last year. They didn’t have the best year. But they came out and they played. They stepped up today. They performed really well.”

While the Hilltoppers’ staunch defense last week may have surprised some, the Hilltopper offense had been witnessing its counterpart’s evolution since spring training.

“We knew it was going to happen,” Higbee said. “At the beginning of camp in the spring, we added a few guys to the defense and some young guys getting more experience, and they won [the Vanderbilt game] for us.”

With senior cornerback Prince Charles Iworah, second team All-Conference USA selection senior cornerback Wonderful Terry and a pair of junior safeties, the Hilltopper defensive has emerged as a contender for the team’s identity.

But neither unit can do it alone. It takes solid efforts from both the offense and defense to create a winning program. The offensive has already proven its power, but now, it’s the defense’s turn to round the corner.

“It’s been a lot of team work, team effort,” junior receiver Taywan Taylor said. “Everybody has been coming in on the same page and great camaraderie.”

As the Hilltoppers look to strengthen their mentality in the second half, they also realize the importance of playing with a sense of unity.