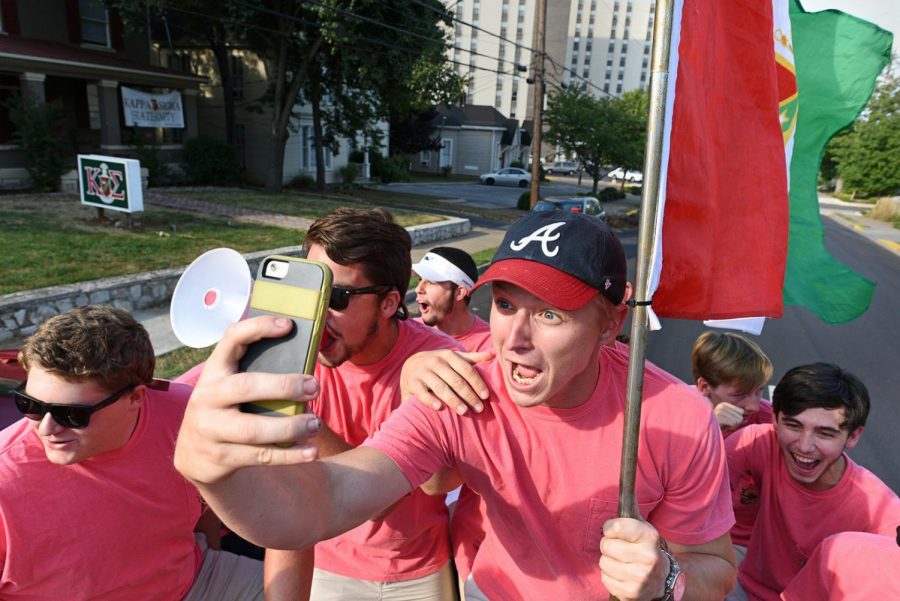 Pledges from Kappa Sigma head to Downing Student Union to sign their bid cards to official pledge on the campus of Western Kentucky University on Friday, Aug. 28. Kappa Sigma had its biggest pledge class to date: 28 formal and three informal. This year marks Kappa Sigma’s 50th year on campus.

Each fall and spring semester, the fraternities of WKU undergo recruitment week to take potential new members (PNMS) and establish them as brothers. While the goal of each fraternity may be similar, the process of recruitment differs among the chapters.

This year, 325 men signed up for fraternity recruitment: that’s 82 more members than last year, according to Interfraternity Council President Colin Perschbacher, a senior from Nashville.

The IFC’s main job is to govern all fraternities on campus and ensure that they follow the rules, Perschbacher said.

“We make sure that the unity on campus between the fraternities maintains itself and that these fraternities aren’t doing anything behind closed doors that would get them in trouble,” he said.

While the IFC monitors the overall process of recruitment, each individual organization is permitted to run its recruitment process however it sees fit since there isn’t a specific set of guidelines the chapters are expected to follow.

Since receiving its charter, Phi Gamma Delta has received multiple Cheney Cups, an award annually given to the Fijis’ best overall chapter.

Despite the fraternity’s international recognition, Fiji president and Bowling Green native Andrew Boyles says they do not perform recruitment differently from any chapter on campus.

“We have the same schedule as the other guys during recruitment week,” Boyles said. “We just use the time that potential new members are at our house to have conversations with the guys and get to know them as best as we can.”

According to Fiji Recruitment Chair Brent Harney, a junior from Lexington, the chapter looks for men who share the core values of Phi Gamma Delta.

“I believe that the only expectation we should have for ourselves during recruitment is that we recruit men who exemplify the values of our international fraternity,” Harney said.

Sigma Nu also has a personal way of running recruitment. Its is called Values-Based Recruitment, according to President Jack McKinney, a junior from Panama City, Florida.

“The main goal of our recruitment is to bring in men who believe in the pursuit of excellence and have values that fit our mission statement: taking the better, and making them the best through a life long dedication to excellence,” McKinney said.

For many of the active fraternity members, the recruitment process begins over the summer and is officially completed on Aug. 28, during bid day.

“I had to organize a recruitment workshop on how to talk to PNMs. I also plan out each event held throughout M.A.S.T.E.R. Plan and rush week, making sure we had enough food, drinks, and activities to do while the PNMs are at our house,” Dunn said.

Like Sigma Nus, Fijis also start their recruitment process earlier than the official recruitment week. According to Boyles, they hold events for PNMs to attend throughout the summer and during M.A.S.T.E.R. Plan so they can get to know some of the PNMs.

“We just try and spend time with them and show them what Fiji is all about to see if it’s something they are interested in pursuing,” Boyles said.

Once official recruitment starts, every PNM goes through four nights of formal recruitment and chooses a fraternity on the fifth night, bid day.

A group of current fraternity members, Rho Alpha leaders, guide these potential new members through the recruitment process. They help the PNMs make decisions and find fraternities that best fit them.

On the first two nights of recruitment, the PNMs experience rotation, where they are led by the Alpha Rhos to each fraternity house to meet all of the members.

The third night is an open house where PNMs can visit any fraternity they want. On this night the men also make their bid cards, which list their top three fraternity choices.

On the fourth night, preference night, PNMs are chosen selectively by the fraternities that were on the PNMs’ top-three lists.

“Each [fraternity] is looking for something different. Some are going to be a lot more serious and selective because they have an idea of who they want,” Perschbacher said. “Other fraternities may be experiencing problems of just trying to meet quota for their chapter.”

Fraternities also have the option to recruit informally instead of formally. This occurs when a PNM knows exactly which fraternity he wants to join and can lock a bid without having to go through the recruitment process.

“A lot of these fraternities bring in informals and don’t give the PNMs a chance to see the other fraternities,” Perschbacher said. “If I could change one thing, it would be this because … it locks in numbers for that fraternity.”

Pi Kappa Alpha gives many informal bids. According to Pike President Barry Sweatt of Bowling Green, this is a process that usually pays off for them because they have a lot of PNMs who already know they want to rush Pike.

“A lot of the guys we get have friends in Pike and choose not to do formal rush because they already know Pike is for them,” said Sweatt. “We recruit all year long by talking to guys we meet in class, at the gym, at dining facilities, etc.”

Sigma Nu is one fraternity that is worried not about meeting quota but rather about finding men to join who want to grow as a person.

While the recruitment process of each chapter differs, every fraternity aims to find new members who share its core values and could potentially be future leaders.