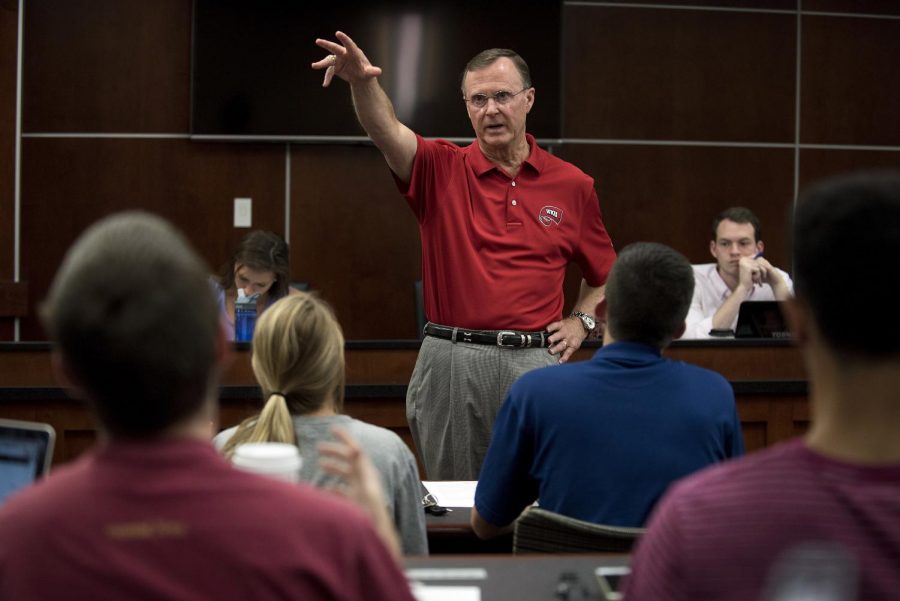 President Gary Ransdell fields questions and concerns regarding the funding and construction of a new Confucius Institute building during a Student Government Association meeting held in the Student Senate Chambers on Tuesday. Ransdell said in a January 2015 Board of Regents meeting that the university received $1.5 million in funding from the Chinese Education Ministry. WKU will provide an additional $1.5 million from private funds to finance the project. William Kolb/HERALD

After a tabled resolution regarding the Confucius Institute last week, the Student Government Association presented a new resolution for first read accompanied with answers from President Gary Ransdell.

After a brief introduction from SGA President Jay Todd Richey, Ransdell began his discussion with the senators by addressing his concerns and uncertainty regarding the recent interest in the proposed building for the Confucius Institute.

“This is something that is nine to 10 months old,” Ransdell said. “So I’m not really sure what is stirring it right now.”

Although the Confucius Institute is a valuable addition to the campus, the building is not high on his agenda, Ransdell said.

Ransdell also provided documents for the senators. Senators received documents on an email exchange between Janet Applin, the associate dean for Academic Programs and member of the Confucius Institute Building committee, and himself with an attachment of the building committee’s minutes of a meeting held last Tuesday.

Ransdell also provided a preliminary building plan showcasing plans for the first floor and second floor of the Confucius Institute. The remaining document given to senators was an article from Butler County’s newspaper, the Banner-Republican, regarding the Confucius Institute’s partnership with WKU and its impact on the Butler County school system.

Last semester, the Board of Regents approved a construction project for a new building to be occupied by the Confucius Institute. Ransdell said the construction will be funded by $1.5 million from the Chinese Ministry of Education and another $1.5 million raised by the university. Ransdell said the university will use private funds, including $800,000 from an Institute for Combustion Science and Environmental Technology reserve fund that hadn’t been used in over five years. The other $700,000 will come from the value of the land, Ransdell said.

The university must also cover additional costs. These include maintenance and operations during the operation period, according to Resolution 2-15-F: Resolution to Disapprove of the Procedure by which the Model Confucius Institute at Western Kentucky University was Effectuated.

However, Ransdell said he will return to China this winter and plans to negotiate WKU’s obligation to cover the costs of maintenance and operations.

“I’m pretty confident we can get that done,” Ransdell said.

The building will be 7,000 square feet and will include three classrooms, a workroom, office spaces and a teaching kitchen. The areas currently designated for the Confucius Institute in the Helm Library will be given back to the library for use. The gallery, though, will remain in Helm and will be dubbed “The Chinese Gallery,” according to the Confucius Institute Building Committee meeting minutes.

However, the contract Ransdell signed with Hanban last December to enter into an agreement “on the joint building of the dedicated site of the Model Confucius Institute” is binding for 50 years.

Although he said others might feel differently, Ransdell said a 50-year contract isn’t necessarily bad.

“In my mind, that 50-year clause is a good thing,” Ransdell said.

“We’ve done a little bit of homework, and we have every reason to believe they would discontinue the Confucius Institute,” Ransdell said. “There’s too much at stake with the teachers and all of the programming that we do, and I’m not willing to risk the amount of money we’re getting annually from Hanban or put at risk our Confucius Institute — especially the Chinese language teaching, which is the niche we have carved out for our Confucius Institute here.”

Ransdell believes it’s imperative to have programs on campus showcasing Chinese culture, and the Confucius Institute is a part of that. Ransdell said the building is not a “big deal” for him, and the plans are modest.

After giving his opinion on the matter, Ransdell welcomed questions.

SGA Chief Justice Kelsey Luttrell said from the research she found, other Confucius Institutes had an average contract of around 10 years instead of 50 years.

Luttrell asked Ransdell, “Was there an attorney involved in this contract process, and were you able to negotiate any of those terms within the contract?”

Ransdell said an attorney was not involved.

Later into the discussion portion, Luttrell asked another question. This time, she asked if Ransdell would consider SGA’s voice if the senate passed a resolution supporting the University Senate and the Senate Executive Committee’s push for Ransdell to revisit the contract.

“What are you willing to do when listening to the voice of the students? Are you willing to reconsider revisiting the contract if we do pass something that says we don’t agree with it?” Luttrell asked.

“No,” Ransdell answered.  “I will not do that … I am not going to risk the Confucius Institute by revisiting a contract that is 10 months old. Sometimes the president gets to make a decision, and that decision was made nearly 10 months ago.”

Resolution 2-15-F, if passed, will voice SGA’s disapproval of the process in which the Model Confucius Institute building was approved.

Ground breaking for the Confucius Institute is expected to begin in November.