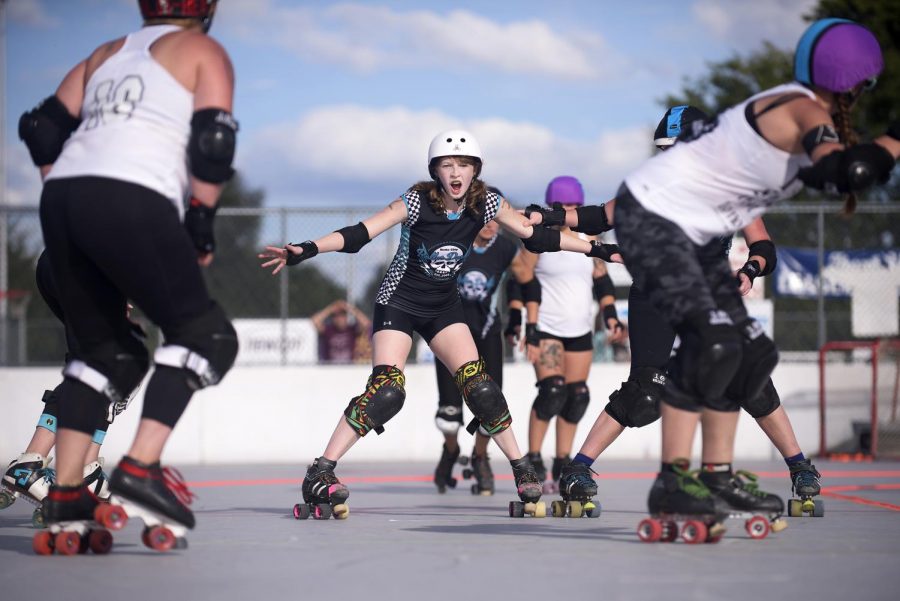 WKU senior Katie Knight, middle, of Bowling Green attempts to form a wall with her teammates in order to block the jammer from the Western Kentucky Rockin' Rollers during the derby bout. When Knight isn't competing in the ring, she can be found at campus studying music, anthropology and art history. Matt Lunsford/HERALD

It doesn’t take innate talent to be a part of the local roller derby team. Katie Knight, a senior from Bowling Green, couldn’t skate prior to joining the Vette City Roller Derby team.

“I went through two boot camps to be a skater, and I couldn’t skate at all,” Knight said. “It shows me that there is always that surprise of surprising myself … I can always do more than I think I could do.”

Since 2009, Bowling Green has been home to the Vette City Roller Derby team, comprised of local women with a desire to compete in a fast-paced contact sport.

The team is split into two groups: the Vette City Vixens, the A team, and the Bowling Green Hot Broads, the B team.

Kristina Arnold, associate professor and gallery director in the department of art, is one of the founders of the team. Arnold — or “Rembrat” as the roller derby team nicknamed her — said starting the organization was no easy task.

“It’s hard to build a league … in a community that has never heard of roller derby; most communities hadn’t when we started,” Arnold said.

Women of all backgrounds are permitted to join. The program occasionally offers new-member boot camps, which allow those with little-to-no skating experience to learn and hopefully join the team.

“Sometimes, on the teaching side of it, you get frustrated on why somebody isn’t learning something,” Arnold said. “Being on the other side of it reminds you that sometimes it’s hard and it’s a process.”

A variety of women from different occupations and backgrounds make up the team. Team captain Megan Grandinetti is a part-time faculty member in the department of biology.

Grandinetti said the sport has allowed her to become a stronger teacher who is more confident in the classroom.

“[Being the captain] you have to be very powerful, very forward, which has definitely helped me in my career as teacher controlling the classroom,” Grandinetti said.

Arnold said she also brings what she learns while playing the sport back to the classroom.

“One of the great things about skating, as a teacher, is learning new things again and remembering what it’s like to learn something again,” Arnold said.

Lauren Lott, a WKU graduate from Nashville, said Arnold is the teacher who pushed her to get involved in the sport. During her time at the University of Tennessee, Lott became interested in roller derby by watching Nashville and Knoxville teams play.

When Lott transferred to WKU, she requested class with Arnold because she knew Arnold was involved in roller derby.

“[Arnold] talked about roller derby so much, I ended up joining instead of just watching,” Lott said.

Despite their up-and-coming nature, the team hit a rough patch last year when their home rink shut down temporarily. This slight loss in members hindered the team’s rankings in the Women’s Flat Track Derby Association.

“We were D3, and we were slated to make D2 by the end of the year,” Lott said. “But that didn’t happen because we had a weird year.”

The team is hoping to raise its numbers and is looking for women with any level of skating or training. There is a place in this sport for everyone, according to Arnold.

“The team incorporates anybody who wants to be a part of it,” Arnold said. “You can be successful no matter what you look like [or] what you weigh. We’ve had girls come who can’t skate, and now they’re skating.”